Where to see fall bird migrations 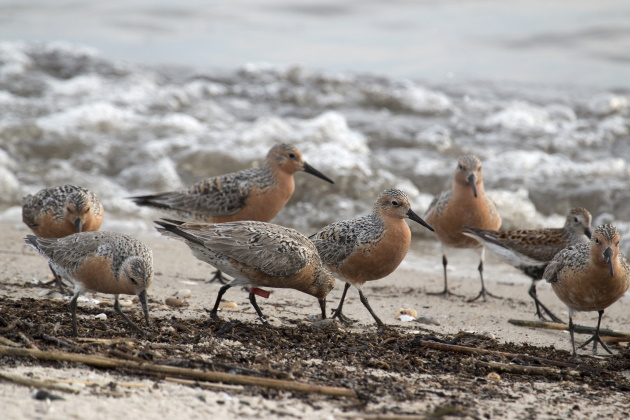 Migrating red knot sandpipers on a beach on the Cape May Peninsula in New Jersey.

Just the mention of wildlife migrations brings to mind the frenzied scene of millions of wildebeest, zebras and gazelles racing across the Serengeti plains of Africa.

It is a grand spectacle to be sure, but every fall certain areas of the U.S. play host to mass migrations of similar scale and excitement as billions of birds take wing on their way to southern wintering grounds — in flocks that are often large enough to darken the sky.

The annual fall migration offers novice and expert bird watchers alike a chance to observe one of nature’s great journeys. Migration flyways generally follow coastlines or river systems where birds are most likely to find water and food.

The migration of some birds, such as hawks and songbirds, will be reaching its peak toward the end of October, while other migrations, like waterfowl, cranes and eagles, will continue through November and into early December.

For those who would like to get in on the action, here are six major stopover spots across the United States where you can see birds — ranging from miniscule hummingbirds to majestic cranes — as they make their way to warmer climes.

Most experts agree that Cape May is one of the best birding spots in the world. Visit the cape on the right day in fall, and you may be inclined to agree.

It’s a great place to see waves of migrating hawks, including merlins and peregrine falcons, as they head south for the winter. Many other birds, such as waterfowl, shorebirds and songbirds, congregate on this peninsula, both to rest up before crossing the open waters of Delaware Bay and to make use of the cape’s varied habitat — a mix of wetlands, marshes, forests and beaches.

This National Wildlife Refuge stands out as one of the country’s most accessible and popular preserves — for birds and human visitors alike — providing a seasonal hangout, November through March, for more than 12,000 sandhill cranes, 30,000 snow geese, nearly 40,000 ducks and even an occasional bald eagle.

Many thousands of bird watchers, photographers and nature lovers follow them there. Situated on the Rio Grande River a few miles south of Socorro, the 57,331-acre preserve was established in the 1930s to protect the sandhill crane. Visitors arriving at the refuge just before dawn witness an amazing sight — the early morning fly-out — when thousands of snow geese lift off the water in search of food from surrounding fields.

As sunset approaches, the ritual repeats in reverse, with the geese returning en masse to the river. Each November, the refuge welcomes the arrival of thousands of sandhill cranes with its Festival of the Cranes celebration, slated this year for Nov. 20-23.

The Sky Islands region of Southern Arizona is one of the most biologically diverse areas in the nation. This collection of mountains rising up to 6,000 feet supports habitats ranging from desert to alpine and features a combination of temperate and tropical climates.

The region is home to half of all the bird species in North America. In the fall, the Sky Islands are swarmed by hummingbirds, attracted by the reemergence of wildflowers induced to bloom by late-summer “monsoon” rains. Some half-dozen species of the little hummers converge by the thousands to fill up on nectar before heading to Mexico for the winter.

Corkscrew was one of the first National Audubon Society sanctuaries created to help preserve vanishing habitat for nesting wood storks — which today number some 100,000 throughout the 13,000-acre preserve.

Situated just northeast of Naples and part of the Everglades ecosystem, Corkscrew Swamp, with its diverse environment of marsh, wet prairie, pine woods and bald cypress forest, is home to a vast array of resident birds, including such exotics as bald eagles, roseate spoonbills and wild pink flamingos.

Fall migrations bring a variety of more familiar visitors, such as cardinals, wrens, common grackles, blue-gray gnatcatchers — and the majority of the preserve’s 100,000 annual human guests. A 2.5-mile boardwalk allows visitors extensive access to the sanctuary. A lesser-known NWR, Squaw Creek offers visitors what has to be the most colossal display of migrating waterfowl in the world.

During the fall, the area’s wetlands — a 7,350-acre plot on the Mississippi Flyway in northwestern Missouri — attract more than a half million snow geese who share the muddy flats with many varieties of duck from diving ducks to mallards. Federally threatened and endangered species recently seen at Squaw Creek include peregrine falcons, piping plovers, least terns and bald eagles (by the hundreds).

Although its intensely salty water makes it uninhabitable for most aquatic creatures, Great Salt Lake actually teems with life. It is indeed a clever act of Mother Nature that turns the extra salty water into a breeding ground for brine flies and brine shrimp, which swarm this inland sea in incredible abundance, feeding huge numbers of birds.

Some 500,000 Wilson’s phalaropes and 1.5 million eared grebes — roughly a third of their total North American numbers — spend weeks and even months here gaining weight and strength for their long journey to South America.

Other species of waterbirds and shorebirds, including sandpipers, stilts, avocets, a variety of ducks and even swans, gather by the thousands along the lake’s edge, especially in areas of fresh water inflow. Bear River Refuge on its eastern shore is just such a place.