Where is the talk about public education? 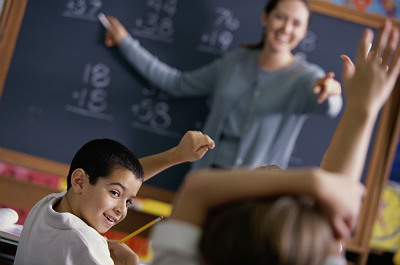 When election time rolls around, candidates spar over a wide range of issues. However, it is rather strange to see the absence of heated discussion about public education in this year's presidential race.

As Joel Gagne put it in his recent article for The Huffington Post, public education seems to have taken a back seat in this election. Furthermore, there are two distinct trends we notice about the education world now: a lack of reform efforts and a tendency for administration-bashing whenever the opportunity lands itself.

Maybe that's the reason politicians are avoiding the topic. But how and when will reforms happen if our future leaders shy away from discussing them?

As November draws near, all we hear are platitudes, across parties and candidates. Many might overlook this oversight with a lot of issues to debate, but this lack of discussion may augur a tough future for K-12 education across the nation.

Bernie Sanders had criticized the No Child Left Behind program in the past via his website, before it was replaced last December. The most we have heard from Donald Trump is that he will dismantle Common Core since it is such a "disaster." Hillary Clinton has moved past that preliminary stage to offer some support for teachers, but again there are no clear or concrete proposals.

K-12 public education hasn't been living in stagnation and has been going through various reforms for the past two decades. The nature of reforms that worked before have changed as well.

For example, we have debated the focus on testing for years, and what has come to light is a need to focus on poverty and income as the biggest qualifiers for education underperformance. Many studies and experts are stressing more racial integration as the surefire way to improve performance in schools.

As Gagne points out, education boards and administrations have a lot on their plates without another new reform policy being dumped on them. In many ways, he says, the absence of focus on education might work out to be a good thing after all.

It's not all quiet on the education front, however. The leading contestants have all made some noise on college and preschool education. The Democratic candidates have proposals for free and debt-free college education, which would cost anything between $35 billion and $75 billion a year. All parties have come up with significant investment in early childhood programs, with increased child care assistance as well.

Yet not a single penny has been set aside in a candidate's budget for the nation's K-12 education system. It could well be that this is a difficult stance for a politician to take or that recent reforms and rehauls have lessened the urgency to address educational reforms at this stage in the elections.

But our K-12 education system does need serious scrutiny. U.S. students have been lagging behind their international counterparts for the past few years, and performance within the nation has dropped as well. We need leaders to focus on and find solutions to this enormous national challenge, and now.