When is a warehouse obsolete? 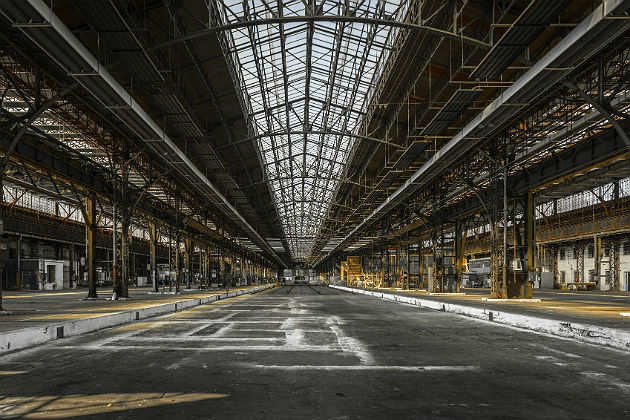 When does a building have no current value as a storage or distribution facility?

Let's look at an example of how the value of a warehouse building can be almost completely destroyed. Then, we will consider some examples of ageless buildings. We will examine the notion that cross-docking can only be performed in a building specifically designed for that purpose. Finally, we will find out how technology can make an old building young again.

The critical nature of floors

The only thing that can destroy the value of a warehouse is a bad floor. The concrete floor is merely a wearing surface, and it can be no stronger than the soil beneath it.

In parts of Texas, there is a peculiarity in the earth that requires treatment with lime to stabilize the soil. An untreated site can result in a floor that becomes unusable. One building in Texas was torn down because the floor could not be repaired.

In another case in Southern California, a fast food company filed a lawsuit against the builder who had installed a floor so full of cracks that it was impossible to maintain the required sanitation standards for storage of fresh produce and meat. The litigation was settled in favor of the food company. We learned later that bad floors are found in other places in the neighborhood, probably because of a soil condition.

In New Jersey, the swamps are called "meadowlands," and special care is needed to have a good floor.

When Thomas Edison perfected the electric light bulb in 1879, he recognized that the invention would remain a curiosity unless a new industry was developed to generate and transmit electricity. Thus, he was instrumental in the establishment of General Electric Co.

In 1911, GE developed NELA Park on 92 acres of an abandoned vineyard on the east side of Cleveland. The National Electric Lamp Association (NELA) was designed for the manufacture of light bulbs, and Edison was personally involved in the planning of the park.

NELA remains in active use today, although its buildings have been converted from manufacturing to offices and conference facilities.

Returning to the world of warehousing, let's look at several ageless buildings that continue to be operated today for storage purposes. A Philadelphia business that was established in the 19th century has several buildings that were constructed in the 1860s.

In Richmond, Virginia, Cockrell Logistics Services is a public warehousing company that operates buildings that are between 40 and 50 years old. While Clark Cockrell admits that some competitors have newer buildings, his buildings are all paid for, and he is able to be far more flexible in his pricing than a competitor with a newer building and a new mortgage. Cockrell's well-maintained buildings may have less clear height than a 21st-century warehouse, but otherwise they look just as sharp as any distribution center that you might see.

A more dramatic example is a public warehouse company based in downtown Los Angeles. The corporate office of Dependable Distribution Centers is in a five-story building with 1.5 million square feet. The building was constructed in the 1970s by Sears to serve as a mail-order facility. The website claims that it is the largest public storage facility under one roof in the United States.

Some experts would persuade us that cross-docking requires a specific type of building for an efficient operation. A typical scholarly report on cross-docking will include a drawing of a long and narrow building considered to be ideal for a cross-dock operation.

But the scholars usually fail to recognize that cross-docking comes in many flavors. The plain vanilla flavor for cross-docking is an inbound load that is segregated and labeled so the operator merely unloads the cargo and reloads it into outbound vehicles. In this plain vanilla operation, if the inbound vehicle is close to the outbound trucks, little floor space is needed. The product simply moves from inbound to outbound delivery trucks.

However, not all cross-docking is vanilla. Let's consider a more complex flavor. Suppose the inbound vehicle contains 1,000 cartons, none of which is marked or segregated. The operator has a batch of orders calling for delivery of items to a group of consignees, but the only way he can fulfill this assignment is to unload all of the cartons and then separate them by stock-keeping unit. Then, the operator must pick orders for each of the customers to build the outbound loads.

Obviously, this procedure takes both more space and more time than the plain vanilla operation described earlier. The long and narrow building is not ideal for this type of operation.

Furthermore, even though they call it cross-docking, there is no reason why the doors must be across from each other. Moving merchandise in a U-shaped pattern with doors that are close to each other is no less efficient than moving the product across the building. Indeed, a fatter building with more storage space may offer a more practical approach for the more complex types of cross-docking.

As you examine the ageless warehouse, you should explore ways that technology can make an old building efficient. Consider the multistory warehouses that still stand in many inner-city business districts.

They contain conventional freight elevators that are slow and expensive to keep in service. Because such machines carry people as well as cargo, they are subject to the elevator inspection laws designed to keep people safe. To comply with the law, they must be meticulously maintained. 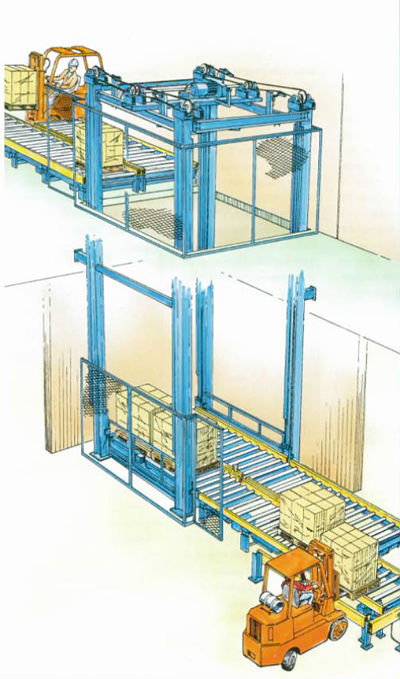 A look at how vertical reciprocal conveyors, or VRCs, work.

These can and should be replaced by vertical reciprocal conveyors, or VRCs. The difference between the two is that the VRCs are designed only to handle cargo, and use by humans is prohibited. The moving parts are more like conveyors than elevators, and they are not subject to the inspection laws that govern conventional elevators.

If you have a building that was converted to warehousing but actually designed for other uses, you may find that the truck docks are not well located and require a long haul to reach the storage areas. If the travel is done by humans, the building will be inefficient.

But if the travel is done by an automatic guided vehicle, you have a whole new ball game. Furthermore, the robotic vehicles are extremely flexible. When you move to a new warehouse, you can take the robots with you and train them to work in the new environment.

Compare that with conveyors. One fulfillment company spent over $30 million to equip its new warehouse with conveyors and then fell into bankruptcy. Much of the conveyor was sold for scrap.

We have looked at several examples of ageless warehouses. Except in the case of a building with a faulty floor, there is always some method of applying improved technology or affordable changes in the structure, hardware or software to make an old warehouse young again.