What to upgrade, eliminate and replace for a better RV 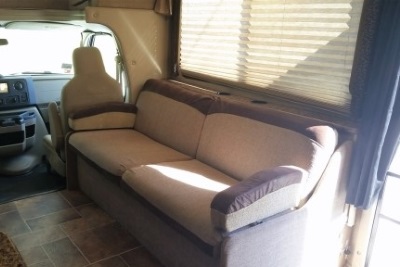 These blinds don’t do much and the couch is uncomfortable as a bed (and short).

RV manufacturers want to make a profit, but the way they skimp on costs is a pain to consumers. The average new RV is $100,000 to $150,000, yet we still have to upgrade an RV after we purchase it.

Here’s my list of items that can be eliminated and replaced or should be upgraded in new RVs.

Current blinds are almost see-through. They don’t stop heat, cold, or very much light. A better blind uses the same labor to install and will be greatly appreciated.

We know this isn’t real leather, so how about just using material that will last? Soon after the one-year warranty ended, our fake leather started to peel.

Searches online show this is a common problem. Many people spent hundreds of dollars to reupholster or even replaced the furniture to solve the problem.

The concept of an accordion type folding door sounds good but actually using it is a pain. We had folding doors to shut off the bedroom.

It didn’t stop sound or even all the light and it was very noisy to open and close. We installed a dark curtain instead, so we could go to bed at different times or use the bathroom in the middle of the night without making a lot of noise.

You know those curtains that they give you to mount above the front cab that you never use? We found they allowed the cab to overheat and the design made it so you couldn’t physically use the cab area when you were camping.

We cut insulated foil to cover the windows instead. It didn’t take any longer to install during our camping stays.

Instead of both a microwave and a poorly functional gas stove, just install a single combination oven that microwaves, bakes, and broils. It saves space and works better.

Our last RV had cupholders everywhere. Two were behind the couch and impossible to use without hurting your back. Two were on the dining table that we only used to hold the TV remote. Only install them where it makes sense.

Our first purchase for our last RV was a mattress topper since the master bedroom mattress was incredibly uncomfortable.

Within a few months we had to buy an extra mattress so a guest could sleep on the couch comfortably. The other “beds” had hard cushions, so we never used them as beds.

I’m not talking about anything major. How about outlets on the dining table to plug in our computers? Whenever we boondock, we had to unplug the TV and send an electrical cord to one of the two outlets connected to the inverter.

The controls to our radio were in the back bedroom though the speakers are outside. When it was raining, it was difficult to hear the TV from its speakers. However, there were speakers above the couch across from the TV, but they weren’t connected.

As a short person, I had to step on the couch to press the button to the TV antenna amplifier. The overhead light switch was on the floor. This is easy to switch when you are coming in the door but hard to use any other time. RV designers need to live in an RV before they sell them.

In our first year of a new RV, the microwave, and the DVD player failed once while the stove and mattress failed twice. Each had to be replaced. Why not install quality components the first time and save money over the long term?

We had to install better vent covers when the factory vents leaked. There was no storage for silverware and utensils other than the oven. To boondock, we had to install a second battery.

The bathroom sink water goes to the black tank instead of the gray tank. Insulation was poor for both cold and hot days. The RV manual was a joke. We can do better.

The problem, of course, is that we all continue to buy new RVs even though we hear the horror stories about cheap components or have experienced them ourselves. Some issues are hard to find even with an inspection.

For instance, maybe we need a test and rating for an overall insulation value. Maybe there can be a quality rating on RVs based on the average amount of repairs done within the first year. Do you have any suggestions for a better RV?