What makes a good speaker? The buy-in 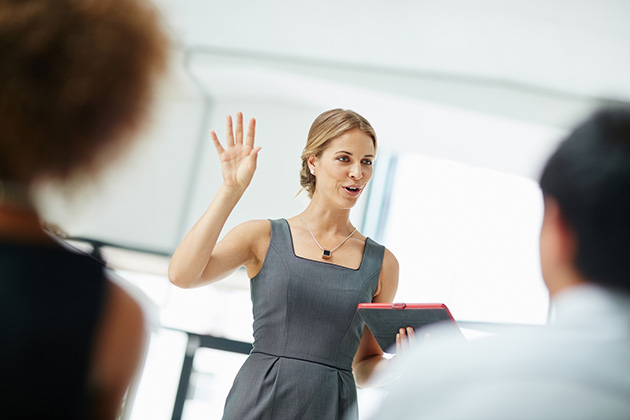 In business, the presentation matters. How an idea is conveyed, communicated, and relayed is important.

For example, there could be a scheduled department meeting focusing on the most mundane concept, and it can become captivating if it is presented the correct way. As I have learned and believe in — it is all in the delivery. One very important component of this is the professional speaker.

Corporations, universities, and organizations often hire speakers to present a new idea, facilitate workshops, and entertain audiences. With speakers becoming ubiquitous in corporate culture, the question becomes: What makes a good speaker? As a writer who is an up-and-coming speaker, I wanted to find the answer.

The beginnings of public speaking can be traced back to ancient Greece. According to Pep Talk India, an organization that trains speakers, the “Fantastic Four” comprised of scholars Aristotle, Socrates, Plato, and Aspasia, the Mother of rhetoric.

They each viewed public speaking as essential to debate and education. The four understood the power of words and how they could affect the way others viewed an issue.

Today’s public speakers have learned from the Fantastic Four and applied their philosophy towards the burgeoning industry of professional speaking. The field exploded in the 1970s and ‘80s as corporations looked to hire motivational speakers to give inspirational talks to their employees.

Figures such as Wayne Dyer, Zig Zigler, and Tony Robbins dazzled and compelled audiences to reach for their goals and live life to the fullest. Shortly after, the business speaker arrived, giving advice on new corporate strategies, different ways to attain customers, cutting-edge marketing ideas, and the important tools needed to retain business.

Many of these speakers have been very successful in their own right. Some of these speakers include FUBU co-founder and Shark Tank judge Damon John, perfume and candle creator Jo Malone, and Virgin founder Richard Branson. Branson’s reach is so powerful that he is among one of the most influential people on social media, boasting a following of 15 million on LinkedIn alone (I count myself as a follower).

All of the speakers I have mentioned may be successful in their fields, but what makes them good at public speaking is that they all connect with the audience. They have a way of getting you to believe in not only who they are and their words, but how their message can affect you. They make you realize how you can become a better worker, business owner, and person. I think of it as "the buy-in."

Simma Lieberman, a speaker, consultant, and author, says, “A good speaker can take a company’s information and get it out to everyone in a way that will be entertaining, and people will be engrossed.”

Lieberman, who also hosts a podcast called "Race Convo" adds, "Speakers will be able to communicate a topic to a crowd and it will make sense in ways that reading it won’t."

Dr. Shelia Krotz, a personal development coach that specializes in child adolescence states, "The No. 1 thing a good public speaker needs to know is their audience. Who are you speaking to, what are the needs of the audience, and how do you meet their needs?"

Dr. Krotz, who is also an authority on neuroscience, continues, "It is important to identify what your audience wants from your message." She says one mistake speakers make is talking about subjects they know little about, and admits, "People contact me and ask me to talk about a variety of things, but I am very reluctant to discuss topics I am not an expert on."

In my search to learn about what makes a professional speaker compelling, I had to look no further than Toastmasters. The organization, which is synonymous with public speaking, has been around for nearly 100 years.

Started in Santa Ana, California, by Ralph Smedley, Toastmasters spans the globe with over 357,000 members in 16,000 clubs that are located in 143 countries. Being a member of Toastmasters myself, I got the chance to speak regularly and hone my craft, receiving praise and suggestions on how to improve my public speaking.

I also received the opportunity to watch 2018 Toastmasters International Champion of Public Speaking Ramona Smith give her wining speech, "Still Standing." Discussing her ups and downs, Smith arrived on stage like a boxer, literally. Bobbing and weaving, singing and dancing, Smith recounted dropping out of college numerous of times, her divorce, and losing in previous Toastmaster Championships. Smith was incredible — engrossing, funny, and authentic. "Still Standing" embodies what "the buy-in" is: vulnerable and human. It was no surprise she won.

When I started to prepare my speech for TEDxWilsonPark, the No. 1 thing I wanted to do is "tell a story that connects." I have been a fan of TED Talks for years. There have been many amazing discussions on the platform about love, mass incarceration, politics, gender, and race.

My favorite, Sir Ken Robinson’s "Bring on the learning revolution" inspired me to appear on a TEDx stage. Sir Robinson’s talk was impactful and brilliant; there was no way that you could walk away from the discussion and not want to help improve education.

I took what emotions I felt when listening to him and applied it to my story of overcoming my fear of stuttering. Energized by Sir Robinson’s pointed words and deliberate speech, I delivered my talk, hoping that the listener was engaged and connected.

In writing this piece, I have watched many discussions and listened to a lot of speeches. I have found that the best speakers make you feel as if they have something in common with you.

It’s not the multimillionaire talking about how he amassed his first $1 million at 20 — there are tons of those speeches — but the businessperson who made their fortune, lost it, made it again, and was not ashamed in talking about his or her mistakes.

It is the body language, the tone of the voice, and the desire to be animated on stage and draw you in. To tell a joke that would make you laugh, recall a story that would draw a tear, and be completely honest and exposed, leading you to "buy in."

Lieberman says, "It is about the connection to the audience. Making it about them and not the speaker. It is about telling a story." A good speaker will take you on a rollercoaster, pushing and pulling you through many different emotions, and like a good ride, you will want to take it again.