What is the weakest link in the Chain of Survival? 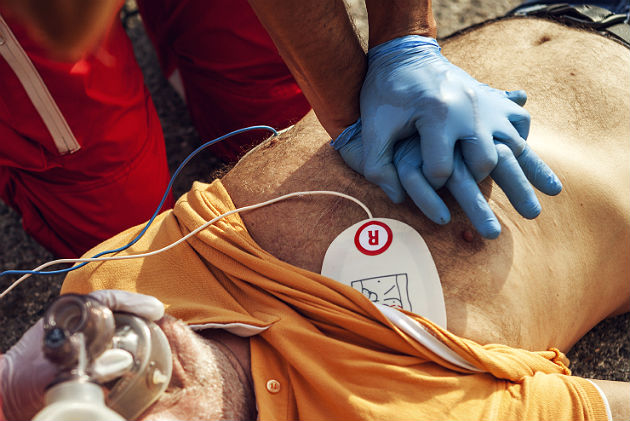 The critical few steps to perform during a sudden cardiac arrest to have the best chances of a good outcome are commonly known as the "Chain of Survival." They are to be performed in order, quickly and with lots of communication with those around the event.

First, let's define the Chain of Survival we're talking about. I've seen the chain have anywhere from four to six links, depending on the authority doing the publishing. I like the chain with five links that goes:

Looking at those five, you might think every one of them is crucial, and they are. But where is the chain most likely to fail? Let's look at each one individually and see what can happen.

Recognize SCA: This is commonly a tough one, especially in the home environment. A nap may not seem too unusual in a baby boomer's home, but when it's discovered to be something different, it's obviously too late. Agonal breaths also fool a lot of people as conscious breathing. Pulse-checking by the layperson is not usually the most accurate.

But many times, the biggest variable is just having someone else present when SCA occurs. Even if people are around, it is common for those present not to act — not so much out of disregard for the victim, but from being scared, confused or panicked into paralysis. So this link has some inherent weakness for sure.

Call 911: The integrity of the 911 system, the prevalence of cellphones and the general social behavior that people want to help other people in need if they can, makes this one a fairly strong link — assuming the first link happens.

Start CPR: I like to think that most people have been trained for (or at least have become aware of) CPR at some point in their lives. That's probably not the case, but with compression-only CPR having shown terrific results, there are few barriers that should prevent some form of CPR activity. Remember to push hard and fast.

Get the AED: This one is another potential weak spot. While AED placements continue to grow in the U.S., the actual numbers still leave the general public/workplace woefully unprepared for an SCA.

Unfortunately, it's also common to hear about an SCA failure where an AED was present but was locked in an office with the key nowhere to be found. Not to mention the near-zero adoption in the home environment. This link still has a lot of weakness.

Advanced care/EMS: Assuming 911 works, this one should be fine. However, you might be surprised. In the case of my own SCA, the ER doc and cardiologist on call were at odds over what to do with me as I lay unconscious in the ER with a full blockage of the LAD. Fortunately, the right guy prevailed. Generally though, this should be a rather strong link.

So what is the weakest link?

Some of the links are certainly more vulnerable to human error, human interaction and human nature than others. Some have extensive process and systems behind them.

If I had to pick one where we should be concentrating our efforts, I would suggest recognizing SCA at the beginning is the biggest opportunity for improvement, and having an AED present is a close second.

But the real answer is all of them. The entire chain must work flawlessly to produce the right outcome. There is no link that is less important. The entire chain can work the way it should, but if you lay on a table in the ER waiting for someone to decide what to do with you, the outcome will be poor.

This then treads into the concept of luck and how that affects the entire Chain of Survival, but that's another story.

Brian Duffield is a sudden cardiac arrest survivor. He ignored those subtle warning signs and had his SCA on May 23, 2006. He was extremely lucky to be in the right place at the right time. Since then, Brian has been an advocate for SCA awareness and has worked in the automated external defibrillator (AED) space the last four-plus years.