What if your transition from the military did not go as planned? 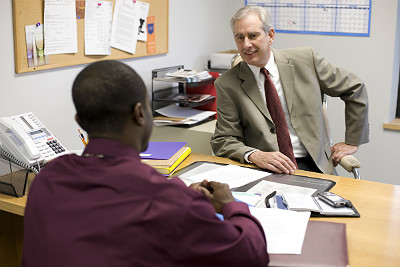 A fellow veteran, Andy, was a high-ranking NCO, who had racked up lots of training and credentials while he was in. This made him particularly attractive to a number of defense contractors who were actively courting him when his opportunity to re-sign came up.

Instead of taking the bonus to stay a few more years, the lure of more money, being closer to his family and moving a lot less was too attractive. He got out, offer in hand and was a few weeks into a training program when the organization experienced a significant cut in funding and eliminated the program into which he was hired.

Andy's story is similar to many others I have heard by working with veterans who came out during this recession. Let's take a closer look at his story and find out what we can learn from his experience.

Andy's next step was to look to the other organizations that had been considering him, but they had either made their hires or eliminated their programs. Still fresh from leaving, he took advantage of some of the counseling programs he was offered and completed a career assessment. He figured out based on his skills, experience and desires, he should enter law enforcement.

Landing a job with a police force is not necessarily a fast process — being an older candidate did not help either. But Andy took the initiative and attended a police academy at his own cost. Despite being a lot older than the rest of the cadets, Andy was exceeding the standard on every test.

With only a few weeks left, however, he tore his Achilles during a run and was sidelined for the rest of the program. Andy was already in talks with several police forces, but without being able to complete the academy, he was not able to sign on.

Andy persevered, but not right away. He went through physical therapy, but while he was sidelined he became depressed. He had no desire to do anything, and with all that time on his hands started questioning his decisions. He struggled with next steps.

Fortunately, Andy's wife, family and friends were patient — but only to a point. They began to strongly encourage him to get involved in something.

Soon, Andy was able to secure his education benefits and began taking evening classes toward his degree in criminal justice. After all, he was still determined to achieve his goal of working in law enforcement. Andy worked on his education until he was healed and able to enter another round at the police academy.

Andy just about finished his degree by the time he entered the academy again. This time, he made it through and was being considered for several police forces. But he had been there before; and was now being told it might be even longer before he could get through the hiring and background check processes.

With a couple years of joblessness behind him and the potential for several more months of unemployment ahead of him, it was becoming increasingly apparent that Andy needed to consider some other options.

But it was tough. This is what he wanted to do, and he had worked so hard to get to this point. It seemed so counterproductive to take a job in security or go work at Home Depot. He feared getting stuck somewhere he did not want to be and began to feel both discouraged and defeated.

Fortunately, there are a few lessons to learn that at one point or another can help during this kind of difficult transition.

1. Use the resources available to you: Counseling, educational support, networking groups. You have earned them, they are free, take advantage.

2. Maintain a strong network: This includes a solid relationship with your family as well as friends. When the situation gets really tough, it is more difficult to share. Talk about what you are going through with the people who care about you.

3. Keep your eyes on the prize, but your options open: Stay busy and engaged. Getting a job at a security firm shows you are committed to your career and will take similar jobs until you land the one you are seeking. Working at Home Depot may open up the opportunity to pathways you did not consider should the law enforcement job not work out — and it can help you pay the bills while you wait.

Taking the above steps can help reduce stress and the likelihood of feeling discouraged or defeated when your transition is not going exactly as planned.