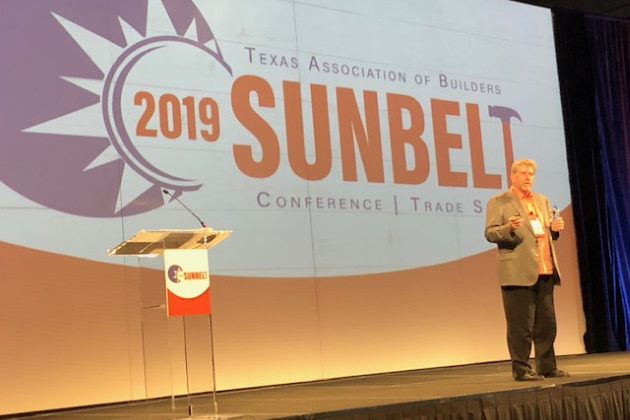 Larry Haines, the founder of Sunconomy, a company that produces 3-D-printed homes, and Dr. Robert Dietz, senior vice president and chief economist for the National Association of Home Builders, discussed the future of housing on Aug. 8 at the 2019 Sunbelt Builders Show™, hosted by the Texas Association of Builders, at the Gaylord Texan in Grapevine.

While giving separate presentations, both Haines and Dietz agreed that we are currently looking at a housing affordability crisis in the U.S.

"We certainly saw the impacts of that last year when mortgage interest rates reached a 5% rate," Dietz said. According to NAHB Wells Fargo Housing Opportunity Index, affordability peaked in 2012 when about 8 out of 10 new and existing home sales were affordable for a typical family.

In the post-recession period, there has been a housing deficit. During that time period, house rates have grown faster than incomes. Today, only 6 out of 10 new and existing home sales are affordable.

The trend for the Texas markets is the same that we see nationwide, Dietz said. Texas has been growing more than twice as fast as the country as a whole. Though the growth rate has been slowing, the bad news is that when you combine a growing population to a lack of affordable housing, the price of housing continues to increase.

"Housing affordability conditions in local Texas markets are relatively competitive with much of the country. And the population gains are slowing down. But I think we have to keep an eye on some of those cost considerations," Dietz said.

"Affordable housing is becoming more difficult for people to own,” Haines said. That was the thought behind the creation of Sunconomy. According to Haines, 42.4% of U.S. workers don’t make enough money to build, buy or rent a one-bedroom house. “It’s a $10 trillion problem around the world," Haines said.

Haines said that since the Great Recession started in 2006, there has been an undersupply of about 330,000 units a year. Adding onto that are the 400,000 or so houses that were damaged or destroyed by recent hurricanes and wildfires.

What is 3-D printing?

ASTM defines 3-D printing as "fabrication of objects through the deposition of material using a print head, nozzle or other printing technology." In the case of 3-D-printed construction, the ink is a GeoPolymer concrete and the paper is the software and substrate. "We’re printing on insulation and we are using as a kind of inkjet, as opposed to an additive layer," Haines said.

The two biggest questions Haines gets regarding 3-D-printing are, "Have you built one yet?" and, "Can I get permits?" Haines answers "yes," to both. He is already building in Texas. "Texas has eight of the top 15 fastest growing counties in the country," Haines said.

According to Haines’ website, www.weprinthouses.com, "We Print Houses is an industry-changing all-in-one 3-D printed home technology system that can be licensed by builders and contractors across the country. The system, which is the first permitted 3-D home printing system in the US, includes a mobile platform and all the corresponding mechanics needed to construct 3-D printed homes that are exponentially more time efficient, waste reducing and disaster resistant than traditionally built homes." Haines explained that 3-D printing can be a solution for increasing affordable housing because it allows builders to build faster, stronger and cheaper.

"Typically, on a house that is … 1,000, 1,200, 1,500 square feet … it’s going to take somewhere between 10 and 14 days to build the structure," Haines said. "It’s also much stronger. We build to withstand 200 mile-an-hour wind loads, 8-plus earthquakes, storm surge … and our GeoPolymer concrete can actual repels water because it’s hydrophobic." Haines said by using curved walls and buttressed ends to sunken roof lines,these homes are built to last centuries — not decades.

The 3-D process is much cheaper, Haines said, because it eliminates a lot of the expenses that go along with traditional building. "We’re essentially eliminating carpenters, sheetrockers, roofings, etc." By eliminating or improving these processes and others, Haines believes they can save about 10% of the cost of construction.

The state of the overall economy

"2018 was a pretty good year," Dietz said, pointing out that the U.S. reached about a 2.8% growth rates. Tax reform and tax cuts did accelerate the economy. However, the forecast shows a slowing growth rate going forward.

Dietz said we are projected to end the year at about 2.5%. But looking ahead to 2020 and 2021, Dietz said we may be looking at some slow quarters — though not a full-blown recession.

Labor shortage is one of the top two issues that negatively affects the ability to build economically, according to Haines. Haines is working to use grants for workforce development programs to teach veterans how to build using the 3-D process.

"In addition to trade wars and any kind of international conflict, the biggest macro risk is the tight labor market," Dietz said. "The labor market is in really good shape. But the bad news is the job openings rate."

The number of jobs that are open and unfilled continues to rise. You could take every unemployed person in the U.S. and give them jobs, and you would still have open jobs in the U.S. economy. "The construction labor shortage has been in place for the last four or five years," said Dietz. We’re currently short about 370,000 workers in the construction industry.”

"Obviously, some of the immigration things have hurt us,” Dietz said. “There needs to be to be an acceptable quota for construction workers." There is a declining share — despite the slowdown in immigration — of domestic-born workers in the construction industry. The industry has a real challenge of trying to bring people in.

State and national associations need to work with trade schools and community colleges to get people the skills training they need to get them into the industry to fill the demand, according to Dietz.

Part of the reason for the labor shortage is demographic. As baby boomers get older and leave the workforce, there aren’t enough young workers filling those jobs. "We have got to raise worker productively in the sector in order to build more with less," according to Dietz.

"The labor challenge is the No. 1 issue limiting the ability to increase and reduce cost going forward." Another market is single-family built-for-rent. There have been reports that this area is exploding. But, according to Dietz, "That’s not really what the data says." The market share was less that 5% in 2018. While this market is growing, it is still at a slow rate.

Townhouse construction, however, is expanding. The market share for these types of homes is about 14%. And in 2018, the townhome construction market was up 15%. Dietz this market share will continue to trend up over the next five years.

But Dietz points out that bulk of millennials, a very large portion of the population, are currently in their 20s. The median age of first-time home buyers in this population is 31-32 years old. "The underlying demand for single-family construction is going to grow and grow and grow," Dietz said.

Jason Zimmerman in an assistant executive editor for MultiBriefs, the leading source for targeted, industry-specific news briefs. He graduated with a Bachelor of Arts degree in History from Texas Christian University. Jason has been with MultiBriefs since 2011 after working as a copy editor for The Dallas Morning News for nine years.