What can managers do when love blossoms between employees? 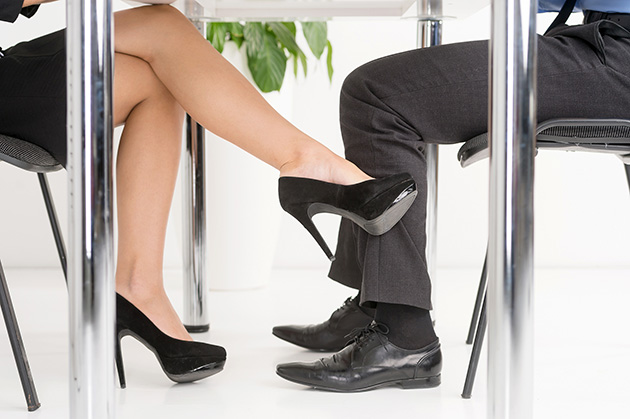 Following the recent announcement that MSNBC co-hosts Joe Scarborough and Mika Brzezinski found love in their on-air contentious relationship and are now engaged, the topic of office romance is fresh in everyone's minds. Unfortunately — as anyone who has been involved in such a relationship can attest — once the novelty wears off, things can actually get pretty crazy.

Organizations should proactively create policies and open dialogue with couples about sexual harassment and document policy infractions, all while walking the fine line between responsible employer and evil destroyer of love.

According to the Society for Human Resource Management (SHRM), early surveys found that approximately "43 percent of HR staff said that they had experienced office romances in their workplace. In other surveys, 55 percent of the HR professionals who responded said that marriage is the most likely outcome of the office romances they experienced. Other studies have reported a higher level of productivity from dating couples at work."

Still, there are downsides, and they can be brutal.

For one, what happens if and when the happy couple starts butting heads? There's a fair chance that the one-time lovebirds will eventually run afoul of each other, possibly affecting the productivity of both. The possibility of sexual harassment and similar charges is also real and should be taken seriously.

Secondly, there is no telling how co-workers would react to the relationship. Fears of bias and favoritism wouldn't be entirely unfounded, leading managers to circumstances where action is necessary to maintain both workplace morale and staff cohesion.

A company's safest bet is to think ahead and write a policy addressing workplace romances before one actually starts. According to SHRM research, in 2013 "more than twice as many employers have written or verbal polices on office romances than in 2005. ... In 2005, 20 percent of respondents had such policies; in the most recent survey, 42 percent did."

The first type of relationship covered, obviously, is perhaps the most dangerous: romance between supervisor and immediate subordinate. As Dana Wilkie, an online SHRM editor, noted, "Almost every respondent whose company had a workplace-romance policy (99 percent) said love matches between supervisors and subordinates are not allowed. That's up from 80 percent in 2005 and 64 percent in SHRM's 2001 Workplace Romance survey. Almost half of these policies (45 percent) forbid romances between employees of significantly different rank, a significant jump from 16 percent in 2005."

Wilkie noted that some organizations even extend relationship bans beyond those of supervisory nature. Approximately 33 percent of companies ban romances between employees that work under the same manager, and 12 percent won't even allow workers from different departments to co-mingle romantically.

According to David Scher, principal attorney for the Employment Law Group, the policy should outline "acceptable behavior in the workplace and how the owner will handle co-worker relationships (preferably requiring any manager to disclose immediately any relationship with a subordinate and also stating that the business may investigate any relationships to determine the impact, if any, on workplace operations)."

Scher also advised that employers "meet with the parties to discuss the impact on the workplace and to ensure compliance with sexual harassment policies and laws."

While shooting down love is no one's goal, SHRM 2013 Workplace Romance respondents said that "they've resorted to one or more of these consequences: Transfer one employee to a different department (34 percent); send the couple to relationship counseling (32 percent); draw up a formal reprimand (21 percent); fire the offending workers (20 percent); remove a worker from a supervisory position (12 percent); suspend the employees (8 percent)."

Still, employers need to be careful that their precautionary actions don't come off as too harsh and authoritarian. Such actions can also garner a negative reaction from staff — not just the couple — as romantic relationships are seen as private matters. Any interference from management, let alone consequences for workplace romance rule infraction, could be seen as unnecessarily intrusive.