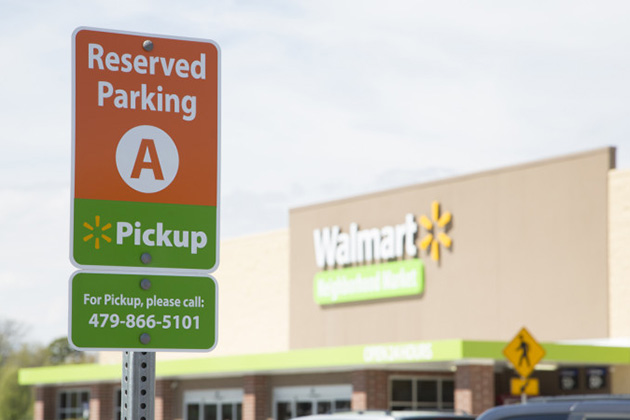 Wal-Mart now offers discounts for shoppers who buy online and pick them up in stores. (Image: Wal-Mart)

Wal-Mart created quite a buzz last year when it announced the purchase of Jet.com for $3.3 billion.

The move aimed to boosts the brand's grocery footprint by testing the grocery concept in New York, bringing fresh groceries to the masses and growing its online sales. At the same time that AmazonFresh is testing out the brick-and-mortar grocery store concept to expand its reach, Wal-Mart did just the opposite — showing the grocery wars are indeed omnichannel today.

Other experiments like the so-called "click-and-collect" model and partnerships with ride-sharing apps like Uber and Lyft show Wal-Mart is set to explore and master all avenues of delivering groceries to customers' homes. The acquisition also brought Jet's co-founder and CEO Marc Lore to the mix. Lore, who is known for his tech expertise, is currently the mastermind for beefing up Wal-Mart's overall e-commerce operations.

Lore has brought with him the culture of innovation, and his addition gave Wal-Mart just the right dose of agility and innovation that it needed for expansion. Within the last year, the brand has added outdoor recreational retailer Moosejaw for $50 million and women's clothing retailer Modcloth for $150 million into its portfolio.

In an age that is driven by technology and convenience marketing, having fresh produce delivered to one's doorstep seems to be the winning stroke indeed. Amazon, known for its innovative solutions, disrupted the grocery industry when it introduced AmazonFresh and then Amazon Fresh Pickup. Right now, it is also testing the concept of the smart convenience store — called Amazon Go — along with its other physical location experiments.

While Wal-Mart dominates the market when it comes to in-store sales, it lags behind in the digital sphere. With 4 million shoppers using Jet.com, the purchase has been a bold and smart move for the grocery giant. Wal-Mart is now perfectly poised to benefit from this move since it can offer a good balance among all kinds of shopping experiences.

While e-commerce is a fast-growing segment in the retail food business, in-store still accounts for over 95 percent of grocery sales. This means it could be more difficult for Amazon, and not Wal-Mart, to win the grocery wars.

For Wal-Mart, which symbolizes the way Americans shop for groceries, the purchase of Jet.com is a brilliant one. It has not only boosted its online strategy and presence but has also opened up access to technology and supply-chain innovation. Noticeable new policies include:

Another big focus is to move away from impersonal shopping to a more personalized experience — not just during the shopping process, but during the whole sales journey. Wal-Mart is now studying data to create a powerful personalization platform that could include anything from customized emails, recommendations based on previous purchases, greeting shoppers by name when then enter the store, among others.

Much has been said about how big of a threat Amazon is to traditional grocery stores. Yet Wal-Mart has added a new twist to the tale. One year into the partnership, the brand now boasts of a concept store called "Story,” which will sell fresh groceries to a temporary location in New York City. During this high-profile display period, workshops and cooking classes will also be held at the store to pull in more crowd.

With its robust physical store presence, Wal-Mart is finding it easier to scale their operations into the online space as well, something that has been a stumbling block for Amazon.