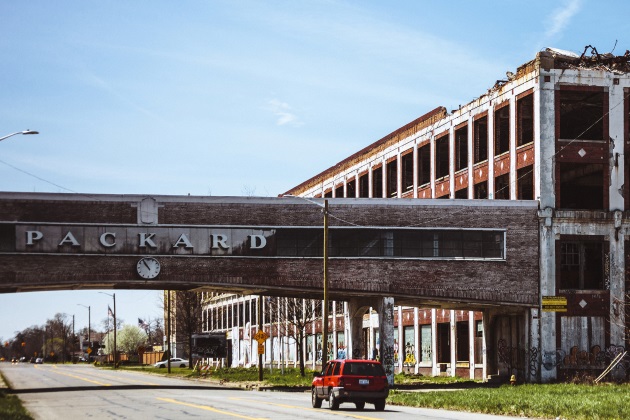 The former Packard plant is the world's largest abandoned factory.

If you’re growing tired of conventional vacations — the beach, mountains, amusement parks, etc. — here’s an option to consider: exploring abandoned factories and industrial sites. Yes, it sounds a bit wonky, but an increasing number of folks are doing it.

Industry has been at the root of American progress since prerevolutionary days, when factories popped up throughout the colonies to produce goods — from clothing to cannonballs — needed by a fledgling and soon to be independent nation.

As the industrial revolution gained momentum in the 18th century, developments such as the steam engine, electricity, mechanized textile looms, the cotton gin, and other inventions permanently changed American society.

Unfortunately, much of the nation’s early industrial infrastructure became victim to the wrecking ball. Superseded by advancing technology, outdated forges, furnaces, factories and mills across the country were demolished.

A small number were merely abandoned and have survived to the present day. There has been only limited interest, however, in the preservation and restoration of these structures and sites that many historians view as vital landmarks of American history.

One organization is trying hard to do something about that. The Society for Industrial Archaeology (SIA) seeks to help preserve the nation’s industrial heritage by sanctioning and salvaging important manufacturing sites.

The National Park Service has done its part as well by recognizing and preserving some of these industrial works as National Historic Sites or Landmarks.

“Such sites not only illustrate America’s former manufacturing way of life,” says SIA’s Executive Secretary Steven A. Walton, “they also tell us stories about the toils of our own ancestors and how their work made us what we are today.”

Walton, who also serves as a history professor at Michigan Technological University, adds that these old factories can provide us a better understanding of production. “Even in a gutted factory,” he says, “bolts and stains and tracks on the floor, conveyors and overhead cranes reflect the division of labor — of thousands of people working in a coordinated symphony.”

Based on suggestions from SIA’s Walton, here are a half-dozen abandoned factories and industrial sites open to the public for exploration and, in most cases, guided tours.

Most notable of America’s vacant factories and, in fact, the world’s largest abandoned factory, is the Packard plant in Detroit. The sprawling 3.5 million-square-foot complex employed as many as 40,000 workers turning out luxury automobiles from 1903 until 1956.

Now in the hands of a private developer, the old plant is slated for a $350 million makeover, aimed at bringing in mixed-use tenants including a brewery, restaurants, retail outlets and apartments. In the meantime, a tour program has been initiated to guide visitors through the decrepit, thoroughly vandalized remains of what was once the most modern car plant in the world.

The raw, rusty environs have been unintentionally enhanced by graffiti applied through the years to nearly every vertical surface. Tours, conducted by Pure Detroit, are 90 minutes long and cost $40 per person. Participants must be at least 18 years old and capable of walking up to two miles on uneven surfaces. Closed-toe shoes are a must as are provided hard hats. Most famous, of course, for their aviation achievements, brothers Orville and Wilbur Wright operated a successful bicycle business at several different locations in Dayton, Ohio from 1892 until 1909 when they turned their attention to building airplanes. In fact, the Wrights used profits from Wright Cycle Company to finance their aviation experiments.

An old red brick building at 22 South Williams Street — the original location housing a Wright bicycle shop — has been preserved as part of the Dayton Aviation Heritage National Historical Park.

The last location of their bicycle business, a building on West Third Street, was where they also constructed their first airplane (the Wright Flyer). Henry Ford purchased that building in 1937 and moved it to Greenfield Village in Dearborn, Michigan.

NPS rangers conduct free guided tours at 10:30 a.m. daily that include the Wright Cycle Company, the Wright Memorial and Huffman Prairie Flying Field where the Wrights flight-tested their early aircraft designs, including the 1905 Wright Flyer III. A replica of that airplane is on display at the park. The Carrie Furnaces, viewed across the Monongahela River.

Declared a National Historic landmark in 2006, the Carrie Blast Furnaces are a rusting remnant of U.S. Steel’s legendary Homestead Steel Works — and a solemn vestige of the Pittsburgh area’s 20th century domination of the steel industry. The furnaces are a unit of the Rivers of Steel National Heritage Area encompassing eight Western Pennsylvania counties that are home to “Big Steel” and that at one time comprised the most powerful industrial heartland the world has ever seen.

During a two-hour guided tour, visitors hear stories about the site’s technology and the culture of its workers. They also learn about the iron-making process, from the movement of raw materials to the tapping of the furnaces that produced fiery molten iron. Morning and afternoon tours are offered from May through October and are priced from $14 to $25.

Watching the process of primitive iron-making may not sound all that exciting, but the Saugus Iron Works gets high marks from visitors who find great fascination with the tours and exhibits at this National Historic Site nestled along the Saugus River about 10 miles northeast of Boston.

The site presents a reconstruction of the first integrated iron works in the New World. It produced wrought iron and cast-iron products from 1646 to 1670, utilizing the most advanced technology available in early Colonial times. The site is seen as nationally significant because it is considered the birthplace of the iron and steel industry in America.

The nine-acre site consists of a museum, authentically reconstructed industrial buildings, working water wheels, a blacksmith shop, a 17th century home, a nature trail and a picnic area. Guided tours of the museum, industrial site and the Iron Works House are available at no charge, Wednesday-Sunday from June 1 to Oct. 31. The Sloss Furnaces opened to public tours in 1983.

Another important chapter in the development of America’s iron and steel industry was writ large in Birmingham, Alabama, where Sloss Furnaces were pioneers in the process of smelting pig iron. Established in 1882, it was this iron industry that prompted Alabama’s largest city to grow around it.

People once gathered in the smoke and fumes along streets near Sloss to watch the molten iron and burning slag pour from the furnaces that filled the sky with a fiery orange glow. The collective memory of Birmingham is filled with stories of furnaces belching fire and smoke and of men who toiled and all too often died — due to the intense heat and back-breaking labor.

Nowadays, Sloss tells a different story. The furnaces were shut down in 1970, lost to obsolescence and declining markets for pig iron. But that wasn’t the end.

The towering furnaces and massive old steam engines have been preserved as an unusual new museum — one that tells the stirring tale of an industry that built a city. Proclaimed a National Historic Landmark, the site was restored in 1983 and opened to public tours. Free self-guided tours are available throughout the week (closed Monday) and there are guided tours ($2 per person) on most Saturdays and Sundays.

One of the country’s most unusual industrial sites — reclaimed in the early 1970s as a city park — contains the remnants of the sole remaining coal gasification plant in the United States.

The plant operated from 1906 to 1956 when the city of Seattle bought the 20-acre site on the shores of Lake Union for the purpose of creating a park. Soil and ground water contamination forced extensive remediation to “clean and green” the site before local landscape architect Richard Haag set out to design the park.

His unique approach to the park — which merited an Award of Excellence from the American Society of Landscape Architects — utilized numerous elements of the old gas plant. Some stand as ruins, while others have been reconditioned, brightly painted and incorporated into a children’s “play barn,” constructed in part from what was the plant’s exhauster-compressor building.

The park features an artificial kite-flying hill and it serves as a popular setting for concerts and political rallies. It’s also the starting point for Seattle’s annual rendition of the infamous World Naked Bike Ride.