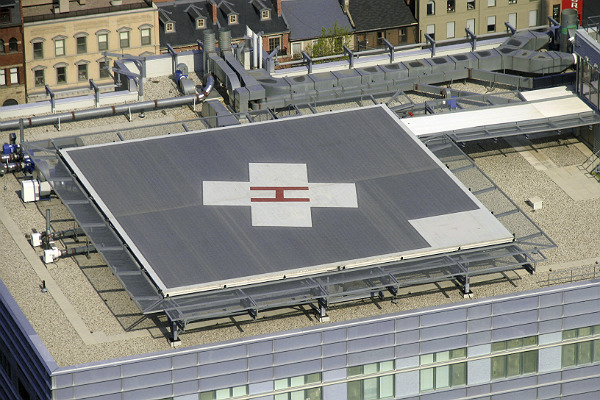 The voice on the other end of the phone was emphatic. "You have to help me stop it."

The voice belonged to a long-time friend, a commercial real estate developer. "It" was a rooftop helipad.

The city wanted him to build one atop one of his proposed projects — the redevelopment of a large, historic downtown building — in exchange for granting his construction permits. In the odd dance between municipalities and developers, this type of arrangement is called a "set-aside." If other parties try it, the criminal code brands it "extortion."

My friend claimed that adding the helipad would blow his budget and trash the building's aesthetics, while providing little public value. After a bit of research on FAA regulations coupled with a report from a consulting engineer, we managed to persuade the city to drop the idea.

Rooftop helipads have always been controversial, even more so since a New York Airways Sikorsky rolled over atop the Pan Am building in 1977, killing four passengers waiting to board and one pedestrian below on the ground from falling debris. The Pan Am heliport never reopened.

The debate was triggered anew in March in Seattle, where a television news copter plunged from its elevated pad into the street, killing its crew and sending a river of lit Jet-A fuel flowing down the pavement, burning motorists. And the Los Angeles arts crowd has long demonized that city's requirements for emergency helipads atop high rises for creating a downtown skyline that suffers from terminal ugliness.

Rooftop or elevated helipads present special challenges in operations and design, yet many hospitals choose to have them.

For the pilot's perspective, landing on an elevated structure, especially in an urban environment, presents all sorts of issues: squirrelly winds due to shear from surrounding buildings, obstructed approach or departure paths, lack of good places for autorotations if something goes sideways on departure, and the ever-present danger of hover turning into a piece of fence, a pole or the building itself. Landing on elevated structures is stressful for many, and some helicopter pilots never get comfortable with it.

Then there are the technical and financial challenges. To accept the broad range of civil, parapublic and military models, any helipad should be at least 50 by 50 feet, able to support 20,000 pounds, be sloped with a drainage system that contains a fuel/water separator, and have a built-in fire suppression system. Just like a ground pad, you need a windsock, lighting and security fence.

Proponents of elevated helipads at hospitals argue that they are safer — because they keep the helicopter separated from ground pedestrian and auto traffic — are more secure, and facilitate quicker patient loading and unloading. And in a dense urban area they may have a point.

Still, last time I checked, most emergency rooms were on the ground floor.