Vanilla Ice is back with a brand-new invention 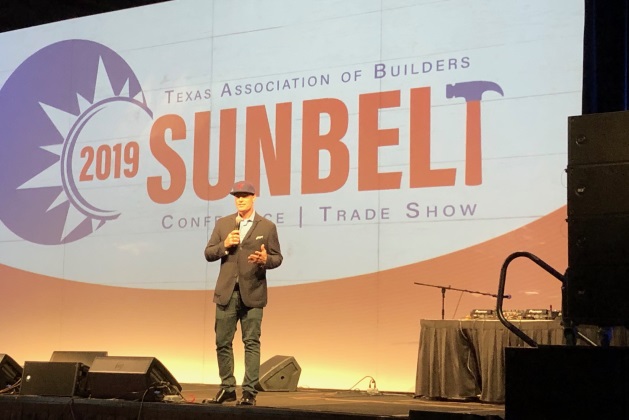 Vanilla Ice speaks at the 2019 Sunbelt Builders Show™, hosted by the Texas Association of Builders.

GRAPEVINE — Vanilla Ice built a legacy as an iconic hip-hop music artist in the 1990s.

Best known for his No. 1 hit song, "Ice Ice Baby," Vanilla Ice has become a successful real-estate entrepreneur and remodeling expert with more than 15 years of hands-on home improvement experience.

"Owning your own home is the American dream," according to Vanilla Ice. "Decorating it the way you want," to make it a home. "That’s what I try to create: a lifestyle," he said. "I don’t just build them to make money. We can spit out spec homes all day long, and they’re really no fun. There’s no emotion in it. There’s no family in it. I love doing the custom homes and selling them to people and families who really appreciate the hard work that it takes to build them."

Vanilla Ice spent the session taking questions and talking about how he went from famed musician to home improvement expert.

Making the switch did not seem like a big leap to Vanilla Ice. "I didn’t switch. I just found a new passion," he said.

Vanilla Ice wrote "Ice Ice Baby" when he was 16 years old. The Dallas native (he attended R.L. Turner High School in Carrollton) spent his summers visiting his father in Florida. "I sold 180 million records and bought some houses all around the country. I never saw the houses," he said. He chalked up the purchases as a mistake and sold them. He made millions.

He began buying more and paying decorators, designers and architects to update the houses. He quickly realized that if he learned how to do those things himself, it wouldn’t eat into his profits as much. So, he went to design school where learned about color palettes and how to cater to an area’s demographics. "That’s where it all started 30 years ago," Vanilla Ice said.

Today, Vanilla Ice loves searching for unique technology and products to use in his houses. He looks at vendors with everything from cutting-edge, energy-efficient appliances to home-automation technology. "New products inspire me." Vanilla Ice had been building homes for years when he was approached about being a part of a reality TV show about home improvement. At first, he didn’t want to do it. "I didn’t think people would want to see Vanilla Ice renovate a house. I just didn’t think it was interesting."

He was convinced to "just do what you do" and they’d film him while he did it. Nine seasons later, more than 100 million viewers have tuned in to watch him and his crew.

Vanilla Ice was surprised — and honored — that it inspired so many people. "I have people walk up to me … and say ‘I never thought about doing a renovation. I got into it because of you,’" he said. "I love that about it."

Build an effective and efficient team

Vanilla Ice owns a real-estate company, a mortgage company and a homebuilding company. He has put together a small team based on what he’s learned from going to different seminars and reading books. Several times he referenced a book called "The Platinum Rule," a book by Tony Alessandra and Michael O’Connor.

He credits the book with teaching him how to strategically build a team that was more efficient and effective than larger teams. It taught him how to place different individual personalities in areas where they like what they’re doing and highlight their strengths.

"They perform better in that position as opposed to doing something where they’re getting paid for doing what they don’t like to do. I’ve found that when you get paid and you enjoy doing it, you work a little bit harder and come to work with a little bit better attitude."

"I built a great team almost 30 years ago, and I haven’t stopped," he said. "We’re all working together. They’re all licensed in every trade. We build homes and we have fun doing it. It’s not a boring process unless you make it a boring process." Vanilla Ice doesn’t believe his celebrity has helped him in his building business. "You still have to work hard no matter what it is you do. Celebrity goes away real quick. You’ve gotta get sweaty and get to building. That’s the same no matter who is doing it."

"I always say, ‘Expect the unexpected.’ Every time you try to plan something, it always changes," he said. Vanilla Ice says to take it day by day and focus on the list of things you have to get done today. "Stop worrying about things that haven’t happened yet," he said.

"Put that passion and energy into whatever it is you’re trying to go. But always remember that money is not success. Happiness is success."

"I will talk your ear off about real estate," Vanilla Ice said as he wrapped up the Q&A session. "But we’re gonna dance right now!"

Grasping a red, sparkly microphone, Vanilla Ice invited attendees of the 2019 Sunbelt Builders Show™ onto the stage with him to dance and sing along. The mini concert included “Ice Ice Baby,” and people of all ages danced and took pictures or videos with their phones.

Jason Zimmerman in an assistant executive editor for MultiBriefs, the leading source for targeted, industry-specific news briefs. He graduated with a Bachelor of Arts degree in History from Texas Christian University. Jason has been with MultiBriefs since 2011 after working as a copy editor for The Dallas Morning News for nine years.