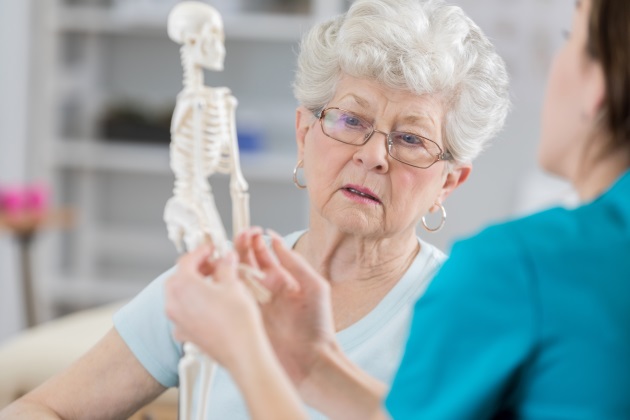 Unfortunately, most people are unaware that they have osteoporosis until they break a bone.

The U.S. Preventive Services Task Force (USPSTF) released guidelines for osteoporosis screening on Sept. 16, 2002, recommending that women who are 65 years or older be evaluated. Screening also can show low bone mass and the likelihood of developing osteoporosis.

Using an osteoporosis risk assessment instrument, the task force found low body weight (<70 kg) and lack of estrogen use to be the most appropriate clinical risk factors for initiating a screening bone density test in women less than 65 years.

Dual/energy X-ray absorptiometry (DXA) is the gold standard for assessing bone health. Although effective in identifying those with low bone mineral density (BMD), using DXA to screen for bone health is limited by cost, size, and technical requirements to operate the machine. In addition, while levels are low, DXA exposes patients to ionizing radiation.

A recent study, however, showed that inexpensive ultrasound screenings for osteoporosis were equal to data gathered using DXA. Patients scheduled for DXA at the Robert C. Byrd Clinic, a rural primary care facility in Lewisburg, West Virginia, were recruited from June 2015 to June 2016.

Ultrasonography was used to scan the left and right calcaneus of the patients, and blood was collected from a finger prick for vitamin D analysis. Information was collected regarding Fracture Risk Assessment tool parameters, menstrual history, and drug and supplement use.

The researchers found data from the calcaneus was equal to data gathered from the DXA. Carolyn Komar, Ph.D., associate professor of biomedical sciences at West Virginia School of Osteopathic Medicine and a co-author on this study, noted that while ultrasound doesn’t yield the same information as a full DXA scan, ultrasound gives a clear enough snapshot for patients of concern and is a promising tool for assessing more people across multiple demographics.