Updates on treatment for IT band syndrome 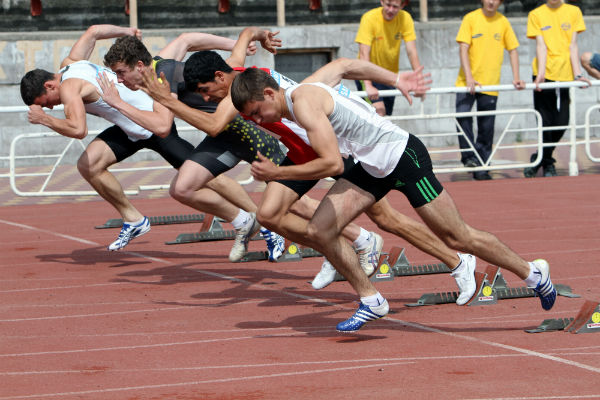 I recently listened to a great little podcast on IT band syndrome from BMJ Talk Medicine, entitled “Mythbusting iliotibial band pain with Dr Rich Willy – it’s not friction.” I’d definitely recommend giving it a listen yourself, as there are so many great points to take away.

I will do my best to summarize it in this article.

IT band syndrome is the most common cause of lateral knee pain in runners and accounts for up to 14% of all running injuries. It is generally more common in males than females.

Pain occurs on knee flexion from 25-35 degrees, especially as the hip is extending. This occurs most frequently in downhill running or descending stairs. Pain is usually described as sharp or stabbing and gets worse with continued activity, leading the runner to cease altogether.

There has been a huge misconception over the years about the cause of this lateral knee pain condition. It was in fact once known as “Iliotibial Band Friction Syndrome.” How wrong could we be!

Previous thinking was that the source of the pain was the repeated “flicking” of the IT band over the lateral epicondyle causing friction and resultant irritation, inflammation and tissue damage to the underside of the distal band. We now know this is not the case.

The IT band is pretty well tethered to the distal femur and the patella, so there is no “flicking” motion. Instead, the issue is believed to be compression.

The compression at the lateral knee is of the highly innervated adipose tissue which lies between the IT band and the lateral femoral condyle. As the knee flexes past 30 degrees, peak tension is reached in the band which results in a compression of these tissues.

IT band pain is, as all running injuries are, a result of a training load error. Usually, a runner has had a rapid increase in running distance or has been running more downhill or on trails than previously accustomed to. Other factors which may increase the likelihood of developing this condition are:

There are two “special tests” that have been used consistently for decades to assess for IT band syndrome. However, the use of both of these tests now lie in question.

Ober’s test is designed to assess the tension in the IT band, but we have now established that the IT band is not an elastic structure and so cannot be tight and certainly cannot be stretched. In addition to this, a recent study using cadavers demonstrated that the results of an Ober’s test were not affected once the IT band was cut!

The most likely causes of a positive Ober’s test are tension in the hip capsule or the gluteus medius and minimus muscles.

Noble’s compression test has also been questioned of late. Whilst theoretically it is more solid than Ober’s test, its sensitivity comes under fire as it is prone to false negative results.

The best way to “diagnose” cases of IT band syndrome are via patient history and by ruling out other possible causes of the pain.

Thankfully there are few other structures in this region which could be symptomatic. But it is important to also consider the possibility of pain being referred to the lateral knee from elsewhere. The most likely differential diagnoses are:

Dr. Willy divides the rehab protocol into two phases. Phase 1 is the pain dominant phase where pain is still a feature on a stair descent. The aim of this phase is to reduce pain but continue to move. A therapist may use whatever tools are at their disposal to help with pain reduction.

One of the most important things which a therapist should encourage a client to do is to keep moving. Runners will often instinctively stop running and cease other forms of exercise due to their pain. This, of course, leads to a reduction in symptoms.

However, what this also leads to is a loss in load capacity. And so, when the runner decides to return to running, they have an even lower tolerance and the pain returns even quicker. Instead, it is recommended that the runner continue to exercise, albeit within their pain limits.

This can be achieved in different ways depending on the severity of the individual’s pain. Some may be able to continue to run, using either shorter distances or flat road routes (if a trail runner). For others, a treadmill workout can be utilized, either jogging up a gentle incline or hill walking, since that tends to place less stress on the ITB.

If neither of these are comfortable, then a stationary bike can be used to maintain cardiovascular fitness. Continuing to exercise through injury is not only good for maintaining load tolerance but also for the runner’s mental health.

As well as the above, exercises to strengthen posterolateral hip musculature can also be started. This is often inhibited in line with IT band injury.

In addition, an exercise Dr. Willy describes as a Thomas Test exercise (due to the position in which it is performed) can be used. This involves flexing and extending the knee in a position of non-weight bearing hip extension. A progression from this in a partial weight-bearing position is the single leg bridge.

The Load Dominant phase (incorporating stages 2-5) of rehab can be initiated once stair descent is pain free. Stage 2 begins with heavy, slow resistance training and a continuation of uphill treadmill walking (or similar as described above). Split squat progressions are recommended here as it eccentrically and concentrically loads the relevant muscles and the ITB.

In this case, the injured leg is behind to be in a position of extension as the knee flexes and extends. As much weight as possible should be shifted through the rear leg to load the hip flexors. After the end of the set the injured leg is switched to the front with a concurrent shift in weight to load the hip extensors. Progressions include increasing the height of the rear leg and adding weight.

Stage 3 sees the incorporation of plyometrics to address the energy storage and release demands of the ITB without actually running. Lateral skaters are a good choice due to the loads applied to the posterolateral hip musculature. This can be progressed by adding a resistance band around the waist.

Stage 4 is the initiation of a return to running program. Treadmill running is highly recommended for this program as incline can be controlled, and the session can be stopped immediately if any symptoms arise.

Dr. Willy’s program suggests three runs per week over a four-week period. Each session begins with a five-minute warm up and ends with a four-minute cool down.

It starts at intervals of one minute with a two-minute walk repeated seven times. This increases over the first two weeks to three minutes, then five, eight and then 10 minutes running, initially with two minutes rest and progressing to one by session 4. Reps also decrease from seven for the first four sessions to five, and then four, by session 6.

Over week three, the intervals continue although with longer runs of 13, 15 and 20 minutes repeated three times in sessions 7 and 8 and twice in session 9. A one-minute walk is suggested between reps.

Week four starts with a final interval session of two 22.5-minute runs with a one-minute walk between them. Sessions 11 and 12 are continuous runs of 35 minutes and 45 minutes, respectively.

As you can see, the knowledge we have surrounding the cause, assessment and rehabilitation of IT band syndrome has progressed considerably in the last few years. What was once thought to be a friction injury is now believed to be due to compression.

The way we assess the injury has changed with injury specific testing now playing less of a vital role in “diagnosis.” And rehabilitation has also changed, with the runner no longer advised to rest completely and the focus of rehab moving away from stretching and foam rolling the IT band and strengthening the hip abductors.

We are now advised to keep the athlete moving and loading the involved structures, then steadily increasing the load capacity of the IT band and lateral hip musculature using heavy resistance training, plyometrics and a controlled, gradual return to running.