Universal vaccine for the flu may be just around the corner 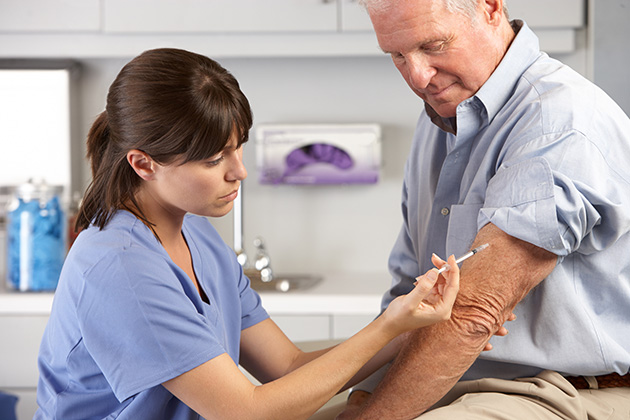 Influenza A, B and C viruses (IAV, IBV and ICV, respectively) viruses infect millions of people across the globe each year. On average, 5 to 20 percent of people in the United States get the flu each year, according to the Centers for Disease Control and Prevention (CDC). During the 2017-18 flu season, influenza was associated with 30,453 hospitalizations; 185 children died as the result of influenza that season.

Influenza vaccines save lives over the years and prevent millions of additional people from getting sick from the flu. The CDC reported on Feb. 15 that the overall estimated effectiveness of the seasonal influenza vaccine was 47 percent, which means the vaccine cuts the risk of the flu by nearly half.

One of the main problems with low effectiveness is that current vaccines do not cover all influenza strains, and strains mutate quickly, so people must undergo vaccinations each year to cover strains not included in previous vaccines.

The results of a new study published in the journal Nature Immunology may change all that — researchers have identified an immune cell that can protect the body from all types of influenza. This could mean complete influenza coverage in just one shot.

The researchers collaborated with scientists at the Monash Biomedicine Discovery Institute in Clayton, near Melbourne, to examine the commonalities between the various influenza strains. The Purcell laboratory at Monash specializes in using mass spectrometry to identify epitopes, which are the part of the antigen that interacts with the antigen-specific receptor or antibody. Specifically, they were looking for killer T cells, which are active in the immune response to certain influenza strains.

The scientists in this study examined influenza epitopes in the blood and lungs of humans through mass spectrometry and vaccination tests. First, they determined the structure and chemical properties of different parts of the virus that had not changed in a century then they conducted tests to see if those parts produced a robust immune response. Next, the researchers conducted vaccination tests on mice using the peptides responsible for activating the CD8+ T cells. These tests showed substantially reduced levels of flu virus in the animal models.

“Our immunization studies with the peptide responsible for activating the killer T cells revealed remarkably reduced levels of flu virus and inflammation in the airways,” Koutsakos explains in a press release.

We have identified the parts of the virus that are shared across all flu strains and sub-strains capable of infecting humans, and then investigated if we could find robust responses to those viral parts in healthy humans and influenza-infected adults and children.”

The results of the study suggest that CD8+ T cells confer cross-reactivity across all strains of the influenza virus, which could be a key finding in the search for a universal influenza vaccine.