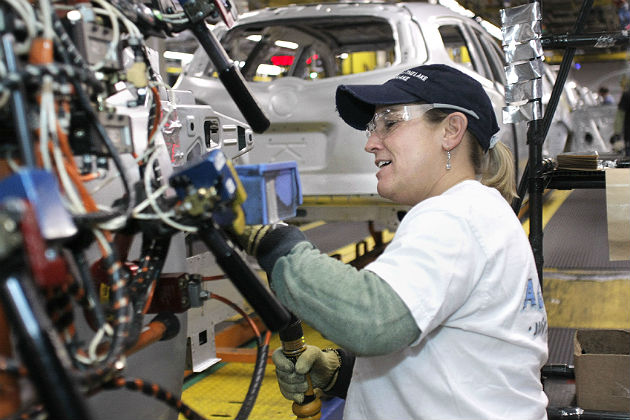 Negotiations with the Big Three automakers — Ford, General Motors and Fiat Chrysler — began last week, and the advantage appears to be with the United Auto Workers (UAW) in what are expected to be contentious talks.

Hourly wages for Ford and GM are in the same area of what Toyota and Honda are paying — around $47 for hourly for labor costs. Fiat Chrysler (FCA) workers are also in that range, but FCA is less profitable than Ford and GM, making them a wild card in negotiations.

At a June briefing about the soon-to-begin contract talks, Kristin Dziczek, director of the Industry & Labor Group at the Center for Automotive Research, said the chances of a strike are "much greater than zero."

"There's a challenge here because the UAW is trying to increase its membership by organizing international automakers and representing a broader base of automotive employment, and a big, long, protracted ugly strike gives them a bad image of organizing in the South," Dziczek said. "And that's something that’s going to have to be managed fairly astutely."

She also said healthcare is a "go-to-war" issue for the UAW, and the union wants the automakers to provide more benefits without more cost-sharing.

GM first at the table

On July 13, General Motors opened negotiations with the UAW for a new contract to replace the 4-year-old agreement that ends in September. Despite the warnings from Dziczek, if good beginnings make for good endings, then the GM/UAW negotiations should have a glorious finish.

"We are going to truly listen to each other and understand the issues we need to work through," Mary Barra, GM's chief executive, said before sitting down at the negotiating table.

Dennis Williams, president of the UAW was a little less friendly. After praising GM for its remarkable comeback since 2008, he said, "To me, a strike is failure. I am not afraid of confrontation, but I don't want one, and our members don't want one."

Williams continued, saying the UAW is seeking wage increases and more job security. They also want to close the gap between veteran workers earning $28 an hour and entry-level jobs that pay up to $19.

As part of his opening remarks to negotiations between Fiat Chrysler and the UAW on July 14, CEO Sergio Marchionne said he's in favor of ending the gap in wages.

"The two-tier wage structure established by the Detroit Three is unsustainable in the long term," Marchionne said. "There is as much as a 50 percent chance that the UAW and FCA US will effectively eliminate the two-tier structure in this round of negotiations."

Marchionne was more forceful than his counterpart at GM, but he may be playing some kind of game in an effort to force a merger between GM and FCA. Williams, head of the UAW welcomed this statement as he has said on several occasions that his mission is to end the wage gap between legacy workers and employees who started after 2007.

Let's not forget about Ford

"We have pretty stable leadership on both the UAW and Ford side, and we feel ready," said Bill Dirksen, vice president of labor relations and chief negotiator for Ford. "I think most companies most years prefer to be the lead, and we don't see it any differently."

Jimmy Settles, head of the UAW Ford division, also sees the Ford negotiations as key to a pattern agreement.

In the past, the UAW selected a single company on Labor Day to negotiate with in order to establish a pattern agreement, but that practice ended 10 years ago. If it is reinstated, the two companies that are not part of the negotiations have their contracts extended.

The question is, will Ford be the lead negotiator in the 2015 contract talks?