Trigger control: The No. 1 shooter error 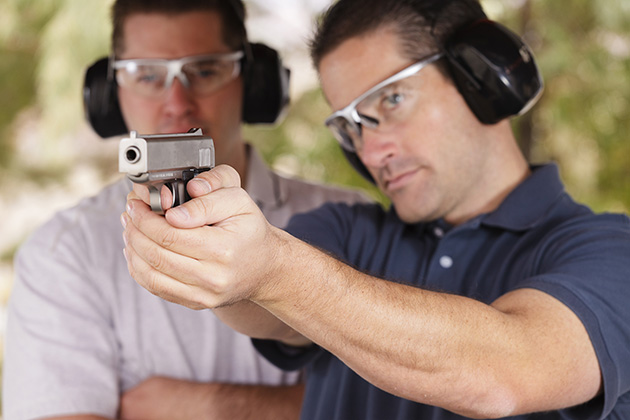 Of all the basic shooting principles being taught, trigger control — or better yet lack of trigger control — is the No. 1 shooter error. Trigger control is, by far, the hardest to teach and the most difficult for the trainee to become conscious of and then develop the skills necessary to master it.

There are several reasons for this difficulty. Some are the natural muscular contractions (a sharp, abrupt movement) caused by a reflex action, and some are caused by instructors with good intentions, but flawed application of specific training methodologies.

The old saying "practice makes perfect" is one example of flawed training methodology. It takes perfect practice to make perfect.

In his book "Mind, Muscle and Music" F.R. Wilson states: "Because the cerebellum is 'nonjudgmental,' it will store whatever movement patterns have been repeated — including errors."

So, initial training in the principles of marksmanship and mental rehearsal techniques should be slow and in perfect order to ensure perfect and error-free sequencing and representation, followed by an increase in speed at such a gradual rate that accuracy of performance and images are not disrupted.

Another example of a flawed training method is terminology. What instructors say (and how they say it) can either be instructive or ineffective and contrary to what the instructor is verbalizing. The phrase "squeeze the trigger" is an excellent example of verbal instruction that conflicts with desired performance.

To physically squeeze an object, pressure must be exerted on the object from two or more sides simultaneously. It is physically impossible for the trigger finger to squeeze the trigger straight to the rear. Squeezing the trigger causes the entire hand to apply pressure on the firearm, disturbing sight alignment and/or moving the muzzle off the aiming point.

However, the independent action of the trigger finger is capable of pressing (to act on with steady force; push/pull steadily against) the trigger straight to the rear avoiding unsatisfactory results. Instructors should avoid catchphrase such as "squeeze the trigger" and "don't jerk the trigger" or "you are jerking the trigger."

The shooter cannot squeeze the trigger straight to the rear and will only hear jerk the trigger. As instructors, we must develop our terminology to prevent confusion and misdirection.

Trigger control is more of a cerebral dilemma than a physical one. Shooters must have command of their emotions before they can effectively control physical movement.

Trigger control is broken down into two phases: the independent action of the trigger finger steadily pressing the trigger straight to the rear and follow-through. Follow-through is the act or manner of continuing the rearward pressure on the trigger through the recoil cycle.

Trigger reset (re-engaging the sear) is a part of follow-through. When the recoil cycle has ended, the shooter deliberately allows the trigger to move forward just enough the reset the sear (usually an audible click). The trigger finger must maintain contact with the trigger from beginning to end of the firing sequence.

What does it take?

Teaching trigger control requires patience, attitude, time, dry-firing and a coach. To develop the skills necessary to master trigger control, perfect practice must be continual. The student must be able to demonstrate a perfect trigger press to a coach before progressing to live-fire training.

Precise dry-firing practice, with the aid of a coach, will develop the skills necessary for the student to control the trigger throughout the firing sequence. A dry-firing model that has proven to be effective is conducted in the following manner:

The coach and the student both visually and physically inspect the training weapon to confirm it is unloaded and safe for dry-firing practice. The coach assists the student in acquiring the preferred shooting stance and grip on the pistol.

The student is then instructed to aim at a small spot on the wall about 15 feet away. The student should be instructed to take up the slack of the trigger, then press the trigger slowly straight to the rear while focusing on the front sight and maintaining proper sight alignment.

When instructed by the coach, the student slowly releases the trigger until sear click (reset) is achieved. When the student has reacquired sight alignment and proper trigger reset, the coach instructs the student to press the trigger straight to the rear once again.

The coach has the student repeat the above drill at least 10 times before resting — constantly watching for shooter errors. This dry-firing drill should be repeated until the student can consistently demonstrate a controlled trigger press without the muzzle moving.

After initial dry-fire training the student can conduct the drill without the aid of a coach. The student must rack the slide of the pistol without releasing the trigger; then re-establish the taught grip and sight alignment, reset the trigger, and again press the trigger steadily straight to the rear without disturbing sight alignment.

Think about it: Five minutes of practice per day for a year — to achieve perfect trigger control? It's worth every minute.

Larry J. Nichols retired in 2011 with 27 years of honorable service as the Senior Rangemaster/Armorer from the Burbank Police Department in California. Larry served five years with the Orange County Sheriff's Department as their Firearms Instructor/Armorer before moving to Burbank. He has more than 40 years of experience as a professional firearms instructor, with more than 32 years as a law enforcement lethal and less-lethal force instructor. He is internationally noted for his innovative and pioneering work in the planning, development and implementation of realistic law enforcement firearms training programs.

In addition to being a published author, Larry is a charter member and current president of the California Rangemasters Association, TREXPO Advisory Board member, listed in Strathmore's "Who's Who 2003-2004" and held the appointment of Region 7 Training Representative from 1994 to 1997 for the International Association of Law Enforcement Firearms Instructors. Larry is certified by federal, state, national and internationally recognized institutions as a use of force, less-lethal, lethal force and SWAT weapons and tactics instructor. He is a certified armorer by all the major firearms manufactures used by law enforcement in the United States. Larry has provided specialized firearms training for several thousand federal, state, county and municipal law enforcement officers. He is also recognized as an expert witness by municipal, state and federal courts. Larry began his firearms training in 1963 with the United States Marine Corps, where he earned instructor ratings with several military small arms and is a decorated combat helicopter Vietnam veteran.