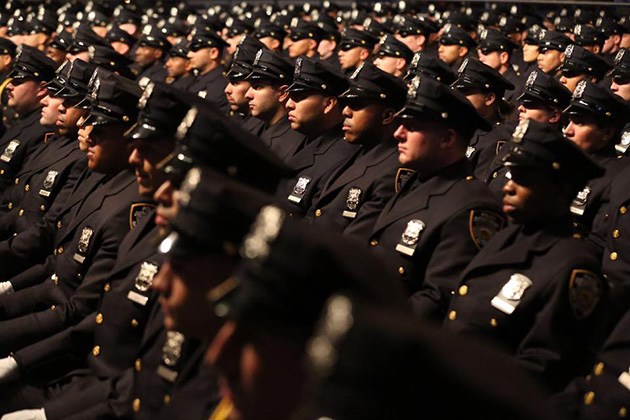 NYPD officers are sworn in during a ceremony at Madison Square Garden in New York. (Image: NYPD)

Over the last few months, graduation ceremonies across the U.S. celebrated the newest generation of men and women in blue. These young officers will be added to the ranks of an estimated 792,000 brothers and 108,000 sisters across the nation.

The newly-sworn officers completed weeks of intense and comprehensive training. Many depended upon the confidence and support of loved ones to make it through. This support will be needed as many of these brave young men and women will be entering law enforcement departments that are understaffed and have limited resources at a time of strife and conflict across the nation.

New York City recently welcomed more than 400 officers in a ceremony at Madison Square Garden, adding to an existing force of 35,395. This represents the largest police force in the country.

"You took this job to make a difference, to lead lives of significance," Police Commissioner James O'Neill said to the officers. "This is the most rewarding profession you will ever have."

The new graduates into the New York Police Department represent 32 different countries with 39 different languages spoken among the officers. Proud families viewed the ceremony knowing their lives would change. There were even two marriage proposals from new police officers.

Further west, the venue was smaller as the city of Detroit added 55 new recruits at a swearing-in ceremony at the Second Ebenezer Church. The officers join a group of 300 officers that had been hired last year to an existing force of around 1,700.

"We need you badly," Detroit Police Commissioner Willie Bell said. "Do not take your new responsibilities lightly. I challenge you to give something back. There's got to be some way you can make someone smile every day."

The Detroit Chief of Police James Craig added, "This is an oath not to be taken lightly. It's based on the tenets of what it means to be a Detroit Police officer: Courage, integrity and service to citizens."

The newly inducted officers are stepping into a tough job and will struggle to fill a major gap in patrol force strength. The Detroit Police Department is still short by 126 officers for which the city had budgeted.

Detroit has worked with a significant shortage of trained law enforcement officers for years, and the numbers have shrunk in the previous decade. The force went from 3,700 officers to 2,700 between 2003 and 2012. In those same years, the city population did dip from 927,000 to 707,000, but this was a much smaller decline than that of the police force.

The job in any community can be dangerous. In Detroit, eight police officers have been shot or killed in the line of duty since September, and New York just lost its fourth officer of 2017 in an "unprovoked attack" early this morning. So far, 67 officers nationwide have lost their lives so far this year.

Whether an officer will serve a big metropolitan city like New York or Detroit or patrol vast miles of lonely rural roads and families, they face an ever-increasing challenge to do their jobs. Whether dressed in blue, brown, khaki, green or grey, law enforcement officers face a tough job.

Craig summed up the challenge well.

"In this present environment of confusion and conflict, you have a steeper learning curve than I did when I first started," Craig told the Detroit graduates. "You'll also be contending with the anti-police rhetoric that's out there. Never give credibility to their claims."

These officers will need not just the support of their families and friends, but the entire community in which they serve and that of a nation which they share in the responsibility to protect.