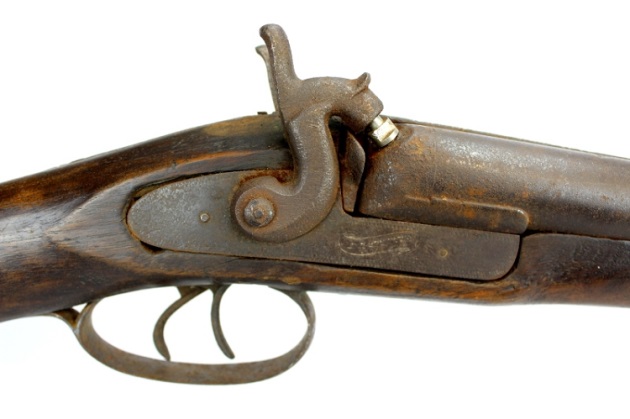 If you fall in love with an old side-by-side, take it to a qualified gunsmith to make sure the gun is safe before firing it.

Side-by-side shotguns can seem really weird. For one thing, both barrels are joined horizontally instead of stacked, as is the case on the more common over/under shotgun. Side-by-sides often come with two triggers, which in itself is enough of a freak-out.

The stock doesn’t have a pistol grip as with most shotguns and handguns, and instead there’s a long, straight neck that twists your wrist downward at about a 20-degree angle. And those big forends on the barrels of an over/under are gone, often replaced with a tiny piece of wood aptly called a “splinter” forend.

The elegant lines of a classic side-by-side.

Given the design of a traditional side-by-side, introductions to them are often painful. Side-by-sides are nearly all field guns intended to be carried for miles in wingshooting hunts, with stock angles optimized for fast-moving quarry. That means they can be lighter than over/unders with a stock that feels uncomfortable: the bottom line is a wallop to the face, shoulder or both.

So, a side-by-side may sound pretty awful by now. In fact, it doesn’t have to be if you follow some important tips.

1. To manage recoil, always make certain that the side by side is firmly against your face (right under the cheekbone) and the fleshy pocket between your breast and shoulder. Don’t strangle the gun, but hold it firmly.

2. Get accustomed to the double triggers. The reason side-by-sides have two triggers is because they date back to the mid-1800s before the invention of screw-in shotgun chokes. When bird hunting, two triggers gave the owner an option of barrel constrictions for both long and close shots. Side-by-side newbies typically forget to pull the second trigger or pull the first trigger twice. Spend time practicing with the double triggers before embarking on a hunt.

The double triggers of a side-by-side serve a purpose of providing barrels constrictions for both long and close shots in the days before screw-in chokes. After shooting a box of shells, you should have mastered the art of the double trigger.


3. If your side-by-side has a splinter forend, don’t wrap your fingers around the barrels. For one thing, you’ll find yourself looking at your thumb, and second it’s an easy way to burn your hands on the hot barrels.

4. Side-by-sides are not intended to shoot hundreds of clay targets in a single session as with an over/under. You’ll regret the recoil, burnt fingers and missed targets. Keep your side-by-side for field use.

5. The long, straight neck of the side-by-side provides plenty of room for error in where to hold the shotgun so that you can comfortably shoot both triggers. Feel free to experiment with the grip for the sweet spot of trigger accessibility and gun swing.

7. Learn where the gun shoots. Side-by-sides shoot flatter than over/unders. That means you may actually have to cover the target with the barrels rather than float the target over the barrels as with an over/under. It takes a leap of faith to shoot a target covered by the barrels, but once you get accustomed to it, the side-by-side should be as easy to point as an over/under.

Give your eyes enough time to understand the wider barrel view of a side-by-side. Ultimately, you’ll find it’s not that much different to shoot than an over/under.


8. Because of the horizontal barrels, side-by-sides have a wider shooting plane. Be patient and give your eyes time to master the view down the barrel.

9. The straight stocks on a side-by-side can be lower than on an over/under. Never lift your face off the stock of a side-by-side to get a better view of the target. The consequences can be as nasty as a bruised jaw.

Despite the challenges of learning how to use a side-by-side, the guns are actually fun and stylish. And for women, a lighter side-by-side is easier to carry for upland hunts.

Just a word of caution when buying a side-by-side. You’ll come across hundreds of years’ worth of used guns that have endured harsh treatment in the outdoors or are simply old, feeble and unsafe. If a vintage side-by-side strikes your fancy, take it to a qualified gunsmith for examination before firing it even once.