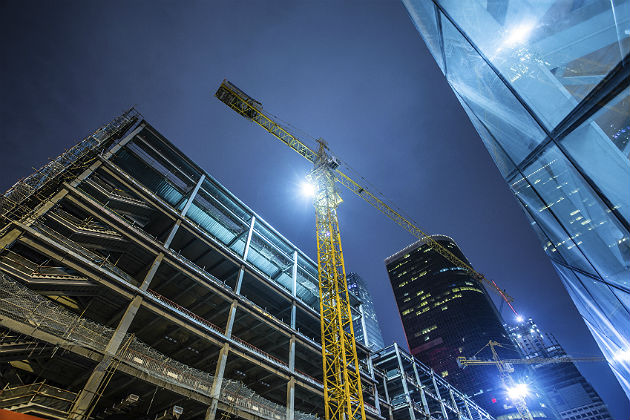 Not all the news about the economy is bad. Numbers coming in for the final month of 2015 show resurgence in activity in nonresidential construction after a drop in November. That trend is projected to continue into 2016, with the commercial sector likely to experience the strongest growth as vacancy rates and employment numbers continue to improve.

Total construction starts climbed 8 percent for the year as a whole, slightly lower than 2014 at 9 percent, continuing a pattern of moderate expansion that began with the recovery in 2012. In addition, the Dodge Momentum Index, an indicator of future activity, rose 4.1 percent in December, reversing November's reported dip. The commercial sector climbed 3.6 percent, and the industrial sector 4.7 percent.

Those projections were backed up by recent market research reports indicating increasing demand in the office and hotel categories. Real estate research firm JLL announced it sees no sign of a slowdown in the office market.

Occupancy rates in the fourth quarter of last year grew by 1.3 times the current supply. That level of expansion could continue for up to two years as builders work to catch up with demand. JLL expects 2016 to be another year of significant growth, up to 48.9 million square feet of new supply — 4.7 million square feet more than in 2015.

Hotel construction also should remain strong throughout 2016 as demand continues to outstrip supply. With occupancy levels projected to remain at record highs through 2017, according to PFK Hospitality Research, growth in hotel construction should exceed this year's mark of 15 percent, as computed by Dodge.

Research firm STR estimates room construction for 2015 grew by 21 percent, and in 2016 that figure may increase by as much as 1.5 percent. STR foresees the greatest demand in the upper midscale and upscale categories, with fewer new luxury hotels coming online.

More good news for the nonresidential sector, Associated Builders and Contractors says their analysis of government data shows construction material prices fell again in December, for the sixth consecutive month. Nonresidential construction input prices were down 4 percent for the year. Weakening of the global economy and a strong dollar are expected to keep prices down throughout this year.

At the same time, the Associated General Contractors stated employers in nonresidential construct added 21,200 new jobs in December, a 3.2 percent increase over the same time last year. Overall, construction unemployment declined to 7.9 from 8.2 percent a year ago, signaling "robust job gains," according to AGC officials.