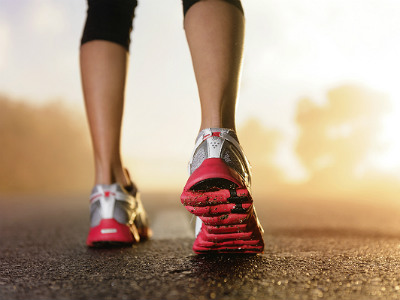 Tight, painful and crampy calf muscles are a problem that will affect the majority of runners at some point. I get so many questions and comments on this subject, that I really feel it's something that should be addressed more.

Running is a great form of exercise for most healthy people. It has obvious cardiovascular and weight management benefits, but also improves bone density and cartilage quality, alongside strengthening our muscles and releasing those all-important endorphins for the feel good factor. But what puts a lot of new runners off are tight, painful calves.

The type of pain is usually described as cramping, dull, heavy and tight. I should know — I've been there. It often develops just into a run and gets gradually worse as the run continues, only to disappear as soon as (or not long after) running stops.

There's never one sudden moment of injury and aside from maybe a little bit of DOMS, nothing to be felt the next day. It does seem to be more commonly (although not exclusively) seen in female runners, and I have a couple of possible explanations for this coming up.

So what is the cause of this phantom lower leg pain?

In my experience, it's a case of overloading the calf muscles, which are inadequately prepared for such a high work rate.

Running is hard on the calves. With every step they must contract with enough strength to plantarflex the ankle and propel the entire body weight forward. If this is something they are unaccustomed to, fatigue causes a build up of lactic acid and the muscles then tighten in response.

So, the treatment for muscle fatigue is to develop more endurance and work on increasing the lactate threshold, right? Well ... maybe.

That may help to some extent in some people, and many new runners do find that the more they run, the calves adapt and pain disappears. However, as we know to be the case in so many injuries, the problem is not always at the location of pain.

While studying, I was always taught to look at the joints above and below the area of pain to check for issues that could be translating through the body. And nowhere is this more apt than when looking at the calf muscles.

We use our calf muscles extensively every day, just to walk about, albeit without quite the force required when running. But still, they should be fairly strong and have a good level of endurance — barring cases with previous calf injuries, of course. So, if the calf muscles aren't a problem, look south to the ankle and foot and as far north as the hips.

The hips are a major cause of injuries for runners. Muscle imbalances and faulty movement patterns here can quickly and dramatically affect the knees, ankles and feet. The glute muscles in particular are not only the powerhouse of running, but also vital for alignment of the lower limb.

Due to many of us having fairly sedentary occupations and often similarly sloth-like pastimes (TV, videogames, etc.), we develop muscle imbalances at the hips so that the flexed, "sat in my chair" position becomes normal.

The theories of "synergistic dominance" and "reciprocal innervation" tell us that when one muscle becomes shortened or "facilitated," its antagonist (opposing muscle group) becomes long and inhibited. In this example, the hip flexors become shortened, leading to inhibition of the gluteus maximus.

An inhibited, or misfiring gluteus maximus is a disaster for runners who rely so much on this powerhouse for propulsion. If the affectionately named "Gmax" isn't pulling its load, something else has to work overtime. Cue the hamstrings and our subject — the calf muscles.

Another common problem at the hip is weak hip abductors and external rotators. These are the smaller "glutes" (medius and minimus) and some deeper butt muscles, too.

Weakness in this group is possibly due to a lack of lateral movement in our daily routines and exercise habits, as well as the typically female postures of sitting cross-legged at our desks or standing with one hip dropped (often with a small child perching on it).

However it happened, weakness here results in adduction and internal rotation of the femur, which translates throughout the lower limb, causing internal rotation at the tibia and an increased pronation moment at the foot.

This is not good for the calf muscles which like to work in a straight line as intended, but also overloads the tibialis posterior (found deep in the calf) as it tries to control this excessive pronatory motion.

Reduced ankle dorsiflexion is another common problem that can cause calf pain while running. Limited dorsiflexion is so often caused by tight calf muscles and is itself linked to injuries such as Achilles tendonitis and plantar fasciitis.

If the motion at the ankle is restricted, the ankle tries to compensate by increasing pronation at the foot, which as we have already seen can overwork the tibialis posterior muscle, lurking deep inside the calf.

Common causes of tight calf muscles again often apply to women who may wear either high-heeled shoes regularly, or the opposite — flat shoes with no support. A muscle needs to be at its ideal resting length to produce optimal performance. A tight, shortened muscle doesn't have the same range when it comes to contracting that a muscle of a healthy length has.

When it comes to running, these tight calf muscles are contracted and overstretched within a narrow range with every stance phase, which soon causes a reflexive tightening of the muscle as a protection measure. And voila: tight, painful calves.

How to fix it

The answer is to identify and correct these underlying muscle imbalances that are placing more strain on the calf muscles. Spend time stretching the calf muscles and hip flexors on a regular basis throughout every day, not just before or after exercise.

Massage and myofascial release can also be a great temporary measure to improve calf muscle flexibility — but note that this is not a long-term solution. Reduce the wearing of high-heeled or unsupportive footwear such as flip flops, UGG boots and ballet shoes.

Running shouldn't be stopped altogether in this period, but reduced to a comfortable level so as to maintain load on the muscles and avoid taking a step back in strength terms. Once improvements in ankle flexibility and hip strength have been observed, a gradual increase in running distance can be implemented.