Those extra lace holes: What’s all the fuss about? 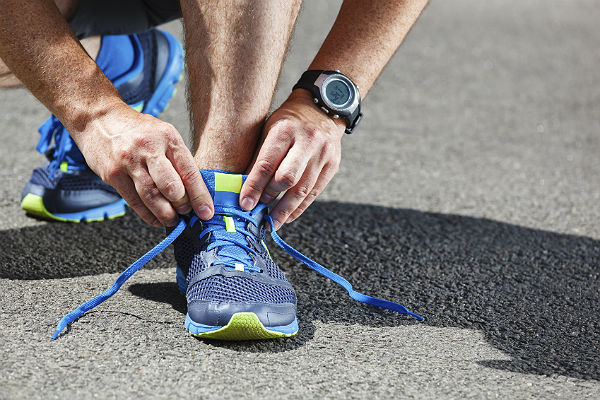 The video above recently went viral across various social media platforms. It claims to "finally" show us what that extra lace hole at the top of your running shoes is really for. While all serious runners and coaches have known their purpose for years, it appears most recreational runners were unaware. Now it seems everyone is trying the heel-lock (or lace-lock) technique.

But should we be? Is this lacing technique suitable for everyone? Or can it cause problems for some people? Let's find out.

How to lace a heel-lock

The heel-lock lacing technique involves forming a loop with the lace by passing it back through the last hole (the one most people previously ignored) from outside to inside. The end of the lace is then passed across the front of the ankle to the loop created on the opposite site and vice versa. Once both laces pass through the opposite loop, the laces are pulled tight and tied at the front, as usual.

The aim of this lacing technique is to provide more support to the heel, essentially locking it in place and preventing the foot from slipping forward in the shoe. This is achieved by the slight change in direction of pull when using that final hole, tightening the fit of the shoes upper around the heel bone.

Most people do find this technique makes the shoe feel more secure and provides a snug fit. In theory, this can help to prevent issues such as blisters, hammer toes and black toenails.

So, in theory, that sounds great. But let's take a look at some of the research around the effects of difference lacing styles and tensions.

Tight-lacing techniques, including the heel-lock, have indeed been shown to slow pronation velocity and reduce impact loading forces — two factors that have both been linked to various running-related injuries. These include runner's knee, shin splints and tibial stress fractures to name just a few. However, the one thing that runners in this study consistently commented on was the discomfort of the tighter lacing techniques.

The most frequent grievance was increased pressure on the top of the foot or front of the ankle. And it's a valid complaint. Lacing running shoes too tight can indeed cause problems such as extensor tendinopathies, nerve or blood vessel impingements and pressure or friction over the upper foot bones (especially in the area of the navicular). So, while lacing tightly can help reduce some injuries, it could also contribute to others.

Who should and who shouldn't

Heel-lock lacing can be suitable for most people. It will lock the heel in place and stop the foot slipping down, reduce impact forces and even slow pronation. If you feel your heel does slip within your running shoes, then give it a go.

The people who should be most wary of this type of lacing pattern are those who are already prone to conditions such as extensor tendinopathies or nerve or blood vessel impingements as this lacing is likely to make it worse.

Those with a highly arched foot may also find this isn't the lacing for them. Similarly, anyone with bony growths or any form of abnormality on the top of the foot may find this technique applies too much pressure over the area, resulting in friction and pain.

If you really want to lock your heel in, but struggle with the increased pressure on the top of the foot, this could be for you. A further study by the same research group a year later also measured the pressure on the top of the foot when running, along with pronation velocity and impact loading forces as before. The runners tested the same lacing techniques as in the previous study, plus one additional style.

This extra lacing technique, known in the paper as the "special" heel-lock is a variant of a standard six-eyelet lacing and the seven-eyelet heel-lock technique. It can be utilized by simply skipping the sixth eyelet and instead forming the loop between the fifth and seventh. From there, the laces are crossed over the front of the shoe and through the opposite loop as with the standard heel-lock technique.

The results showed the "special" heel-lock technique produced less pressure on the top of the foot without sacrificing stability at the heel. This could be an ideal solution for those who struggle with the increased pressure at the front of the ankle, caused by the original heel-lock.

If you think lacing a heel lock may be for you, then give it a shot. You've got nothing to lose. After all, if you find it doesn't suit you, you can simply relace your shoes. If you feel any discomfort after changing your lacing, you can immediately change back and there will be no long-term damage.

As with all changes to sports footwear, introduce it gradually. Don't change your lacing and then head out for the longest run you've ever done. Try it just walking around first and then on a shorter run. Don't pull them tighter than you would usually lace your shoes either — just your average level of tension is fine. Pulling harder than usual makes you more likely to suffer discomfort.

On the other hand, you could go with the attitude of "if it ain't broke, don't fix it," and that is absolutely fine. If you are happy with the way you lace your shoes, they fit well and you have no injury issues, then why change? Don't feel tempted to change just to follow the crowd.