Cancer therapy: Targeting in the field of metabolic rewiring 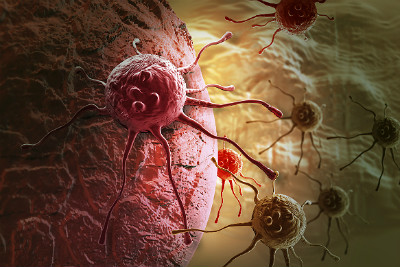 Of more than 100,000 carcinogen point mutations, 350 are known to influence cancer phenotype. However, 30 years of intensive research on cancer biology and large amounts of grant money invested have translated into few novel treatments.

Part of this difficulty in highlighting suitable drug targets could be the large number of passenger mutations in comparison to driver mutations. Also, multiple driver mutations are required for the development of most common cancers.

Cancer is a multifactorial disease. It is well known that oncogenes' gain of function and tumor suppressors' loss of function are among the factors causing cancer. However, it is clear that there must be additional factors involved in the process of tumorigenesis. Reprogramming of energy metabolism is one of these factors.

Cancer is well known to cause major changes in cellular bioenergetics. Some of these changes include: glycolysis, glutaminolytic flux, lipid and amino acid metabolism and mitochondrial biogenesis, as well as induction of pentose phosphate pathway and macromolecule biosynthesis.

Considering the proven critical role of metabolic reprogramming for tumorigenesis, cancer bioenergetics has become a promising and rapidly-growing field. Several compounds have been developed for selective inhibition of metabolic enzymes with a critical role in tumor development. These are in various stages of clinical trial and will probably find their way into the market in less than a decade.

Some other compounds have been subject to ongoing clinical trials with promising initial data, including: 2-deoxyglucose, IDH1/2 inhibitors, PKM2 inhibitors, PKM2 activators and metformin, which target glycolysis, biosynthesis and energy production pathways.