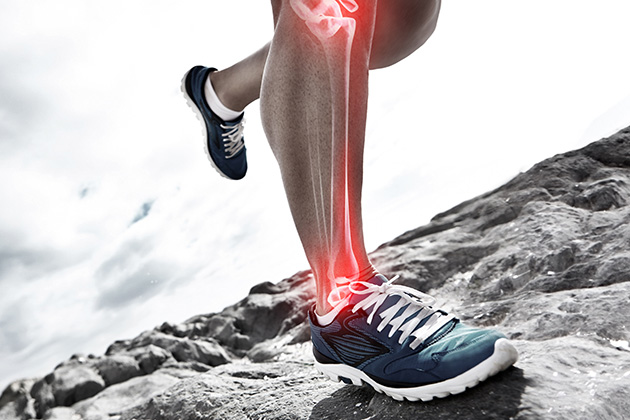 The world of sports injuries can be a confusing one for those not in the know. There are so many terms to decipher and so much jargon to bust that understanding what your physical therapist or doctor is telling you can be nearly impossible.

As a professional therapist, I sometimes need reminding of this and take a minute to explain to our clients what we are talking about without the medical lingo. As a helping hand to those new to the therapy couch, I've created this glossary to explain some of the most commonly used terminologies.

While there are many more confusing terms in this field, these are the ones I am asked to expand on most regularly.

Anterior cruciate ligament. This is one of four main stabilizing ligaments of the knee joint. It is located deep inside the joint and connects the thigh bone to the shin bone — preventing the shin from moving forwards in relation to the thigh.

A form of surgery also known as "keyhole" surgery. Only two small incisions are made, through which cameras and surgical tools are inserted. This is a far less intrusive procedure than "open" surgery.

This describes the way the body moves and functions. No two people have the exact same biomechanical characteristics — movement patterns and postures.

An inflammatory condition affecting a bursa. This is a small sack of fluid, usually located around joints to provide cushioning and reduce friction between bones and other soft tissues.

A form of soft tissue found in joints. Its role is to cushion the joint, provide shock absorption and improve joint congruency.

The strength of the stabilizing muscles of the abdomen. These include the pelvic floor muscles, deep abdominals (such as transversus abdominus) and spinal stabilizers (like multifidus). These muscles are important to provide a stable base of support from which movement can occur. Poor core stability can result in bad postural control during movement, which can cause back pain and injuries, as well as problems throughout the body.

An injection of steroids to treat inflammatory conditions. Conditions such as tennis elbow and bursitis have good success rates using corticosteroid injections.

A "break" and a "fracture" are interchangeable terms to describe a broken bone. There a numerous types of fracture — from stress and hairline fractures, to spiral fractures and comminuted fractures.

Discs of cartilage that are found in between each individual vertebra. They assist in movement and shock absorption at the spine. Disc injuries such as herniations (slipped disc) and degeneration (wear and tear) and common.

A fibrous, inelastic structure that connects two bones together. For example, the ACL of the knee (see above). They maintain stability at a joint.

The lowest part of the spine, consisting of five vertebrae (bones) labeled L1-L5.

An almost circular ring of cartilage located within the knee joint. There are two per joint — the medial meniscus and the lateral meniscus. Their role is to provide shock absorption. They are frequently injured and subject to degeneration (wear and tear).

Magnetic resonance imaging. Performed as a scan to look inside the body. Particularly useful for observing soft tissue injuries.

An injury that develops over a period of time, usually due to a repetitive movement or position. The patient doesn't remember a clear point when the pain started. Tennis elbow is an example of an overuse injury.

Usually used in reference to the foot. Pronation is a necessary movement at the foot that involves the arch of the foot flattening and rolling inward. Overpronation is where this occurs excessively and may be linked to numerous injuries, aches and pains, from the foot all the way up to the back.

A group of four muscles found at the shoulder. Their role is to stabilize the shoulder joint and to assist in rotation movements. Commonly injured muscles and tendons due to their small size and the massive range of motion at the joint.

Repetitive strain injury. Very similar to an overuse injury. Develops gradually due to repeated movements. Carpal tunnel syndrome is an example of an RSI.

Two joints found on either side of the base of the lower back. They are formed by the sacrum (see below) and the Iliac (pelvic) bones. There is little movement at these joints, but they can be a source of lower back pain.

A triangular bony wedge at the base of the spine. It consists of five fused vertebrae that sit below the lumbar spine, between the two iliac (pelvic) bones.

Symptoms that refer into the legs. Usually this is pain, although may include tingling or numbness. The source of the symptoms comes from impingement of the sciatic nerve anywhere along its course. This may be as the nerve exits the spine (usually caused by a disc issue or additional bony spinal growth) or may be a muscular compression in the buttock region.

A ligament injury. Usually a tear to a ligament, graded as 1, 2 or 3 dependent on severity. A full thickness tear (rupture) can lead to extreme joint instability.

A muscle tear. Also graded on severity. A minor strain would often be referred to as a "tweak" and requires minimal rest and treatment. A full rupture may require surgery.

An inelastic fibrous structure that attaches a muscle to a bone. The Achilles tendon is the most well-known example — this connects the calf muscles to the heel bone.

Tendinopathy is an umbrella term used to describe all overuse tendon injuries. These include tendinitis, tendinosis, tenosynovitis, tenovaginitis, etc. There are small differences between the specific forms of tendinopathy, although the symptoms are similar, and medical imaging is the only way to differentiate between them.

The middle part of the spine, from the top of the shoulder blades to the bottom of the rib cage. Consists of 12 thoracic vertebrae, labelled T1-T12.

Spinal bones. There are seven individual bones making up the neck, 12 making up the mid back and five in the lower back. There are also a further five "fused" vertebrae in the sacrum. The vertebrae allow movement of the back and house and protect the spinal cord.

A form of medical imaging that examines bones.