The secret to secured entries at schools 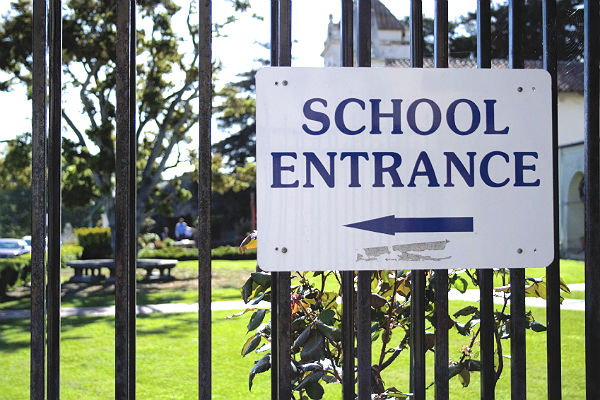 Schools across the nation are reacting to the public outcry to do something in the name of security to protect students and teachers from violence. Many schools look at the concept of a secured entry — a holding vestibule for unauthorized persons until they are vetted and authorized to enter — as the big answer.

However, these schools are spending money to create secured entries that are not likely to work when they are needed. So the question becomes: When it's time to prevent unauthorized passage, will they perform their intended function? I have only seen nine instances in approximately the last 100 implemented or planned secured entries that have a chance at performing their function.

Creating secured entries in schools is more than creating a secondary barrier of glass and a door with a buzzer. I say this after 25 years of securing people and property.

First, we have to look at what a secured entry is. There are many opinions, and they are mostly near target with the exceptions of a couple of points that I don't hear often.

A secured entry is a portal that provides a delay mechanism to assess persons entering a school campus during the instructional day. To create a secured entry, there are a couple of necessary steps that I continually see missed — not out of malice, but out of ignorance to their existence.

Recently, I observed a school that contracted an architect to create secured entries for multiple campuses in their district. The architect moved forward with the designs of a secondary storefront glass-wall system with double storefront aluminum-frame glass doors that were equipped with electronic locks.

They also put a viewing window into this space to allow the receptionist to see the persons inside the vestibule and press her button to open the door and allow them access. The architect was happy. The school was happy. What went wrong then?

Let's take a look at what we want the secured entry to do. We want it to prevent passage of unauthorized persons while allowing the opportunity for staff to assess the persons before authorizing them to enter. What went wrong with the above example is that they didn't do the first step, which was to build a vestibule that could prevent entry by unauthorized persons.

In the above example, the offender can break out the glass or kick through the gypsum drywall wall to gain entry if the staff member says no. Also, the exterior doors are not electronically controlled, so they couldn't prevent someone from entering the vestibule if things were going wrong.

Lessons learned from the Sandy Hook incident show us that we cannot just place a barrier of simple glass. We must make the barrier — glass or wall — impenetrable.

Technologies today allow types of window treatments that turn normal glass into a barrier that doesn't fail when shot or items thrown into it. There are also materials that turn normal walls into ballistic barriers, all without looking like a prison or institution.

The key secret to making a secured entry work is to create policies and procedures around how it will be used and then to build it in such a manner that it will function as needed. A secured entry that is built without giving credit to the policies that guide its use is one that gets bypassed or enacted as a response measure instead of a proactive measure.

In my experience in designing and overseeing the construction of these secured entries, the only time they are successful is if the operational processes and practices are observed, and the location is chosen based on those.

They were successful because there were policies and procedures of how they operate and why they are there. Another important aspect was how the design and construction included elements that were "invisible" when deployed, so it didn't look like an institution or prison while still providing the type of barriers needed to fulfill the function of a secured entry.

Charlie Howell started in the security industry in 1989 as a security integrator. Over the next 11 years, he was able to elevate through the installer, service technician, service manager, applications engineer and project engineer roles. His emphasis on the fact that security equipment should be focused on its role in solving security issues/concerns projected him into the consulting field in July of 2001. As a security consultant and design engineer, Charlie has spent 14 years serving clients in solving security issues and concerns through his services, particularly for school districts and municipalities.