The right way to swing a shotgun 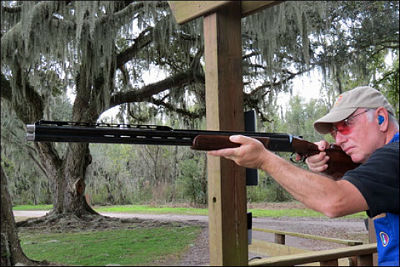 Ask someone about the best way to swing a shotgun, and you'll probably hear about the three popular methods: swing through, maintained lead and pull away.

You certainly need to know about them and the best way to utilize each one on different clays presentations or in the field on birds. We'll touch on them for a moment, but when it comes to actual shooting there are basics that need to be understood beforehand or you'll never master any of those methods.

Swing through is great on crossing targets, let's say from the middle positions on a skeet field. It's described by wingshooters as "butt, belly, beak, bang," referring to starting at the back of the bird and swinging through the body as it crosses overhead. Usually, if you have a predictable line of flight on a fast-moving target, swing through works well.

With maintained lead, the muzzles are inserted in front of the target along its trajectory while matching the speed of the target. At some point, depending on the angle of the target, you'll achieve the proper forward allowance (lead).

On pull away, you start behind the target, along the same flight plane, then pull ahead of it to achieve the correct lead before triggering the shot.

Here's the catch, though. Are your feet in the correct position? Is the recoil pad in your shoulder "pocket"? Did you dip your shoulder during the swing? Did you pull your face off the stock?

With these or any other gaffes you can make during the swing, it won't matter which of the three methods you use because you'll miss the target.

Here are a few basic principles for a successful shotgun swing:

This is the proper way to firmly keep your face against the stock of the shotgun.

Always keep your face on the stock: People either lift their head to see the target better or pull the gun away from their face as they swing. Either way, the results are predictable: a miss. By lifting your head, you'll invariably shoot over the target because you've disrupted the eye/gun/target alignment. If you need to lift your head to see the target, get a proper gun fit. Peeling the stock from your face during a swing generally means that you're behind the bird and you're looking for a shortcut to catch up (doesn't work). Plant the top of the stock (called the comb) under your cheekbone and keep it there during the entire swing. Also, keep your head on the stock even after you've made the shot. You'll find an improvement in your follow-through and ability to diagnose missed shots.

Never look at the shotgun barrel during the swing: You'll lose sight of the target (even for a moment), and the swing is interrupted. Next thing you know, the target is racing away. Focus exclusively on the target to maintain a smooth swing and don't worry about the barrel.

The swing all starts with the hold point: This is the spot where you point the barrel to initiate the shot. When it comes to hold points, you should aspire for the least amount of gun swing. The longer you swing the gun, the greater your chance of missing the target. Find the most efficient hold point to begin your swing. 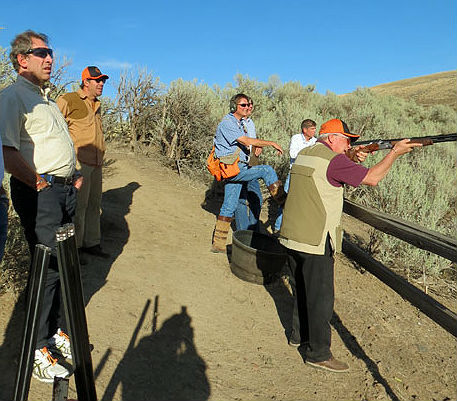 You can see that the shooter's feet are in a natural and comfortable position to enable a wide swing.

Feet should be shoulder-width apart: Perhaps the most common mistake people make when it comes to shotgun swing is incorrect foot position. That said, if your feet are pointing in the wrong direction, you will run out of swing before you can make the shot as your body binds up three-quarters of the way to the target. Here's a quick tip to correct foot position (for righties). Your lead foot should point to the place where you intend to break the target and the back foot is in a neutral position. Remember, you're not shooting a handgun or rifle at a stationary target. Correct foot position should enable maximum "swingability" as you move the shotgun to the target. 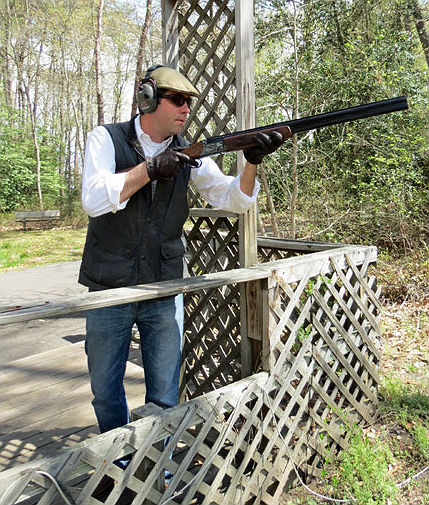 Look at the shooter's left leg, and you can see his knee is slightly bent, allowing for the "nose over toes" posture.

Nose over toes: Lean forward just enough so that your nose is over the lead foot. This is usually accomplished in part by "breaking" your knee slightly. Nose over toes allows you to place sufficient weight around the ball of that foot so your swing has a pivoting element to it.

Swing from the waist: From now on, you are a tank turret from the waist up. What does that mean? You swing from the waist with your shotgun firmly in your shoulder and against your face. Don't dip your shoulder during a swing to finesse a shot. Don't bend your knees like you're getting ready to limbo. If you're shooting an overhead shot, lean back rather than raise the stock from you face. If you're shooting at a low target like a clay rabbit, bend at the waist. Any time you dip your shoulder (called rainbowing) you move the shotgun from the line of the target's trajectory and miss it. You and the shotgun should be one.

Shooting a shotgun involves a lot of subconscious movements that some folks call muscle memory. Regardless of what you call it, the goal is consistency. If you consistently execute a perfect swing, your game will soar.

Generally, when a target is missed people try to correct you by referring to a misplaced gun (behind the target, in front of the target and so on). While that may be true, an overlooked culprit is body mechanics when executing the swing. After the shot, whether it's a hit or a miss, visualize your body movement during the swing and work with that toward consistent results.