The relationship between student behavior and engagement 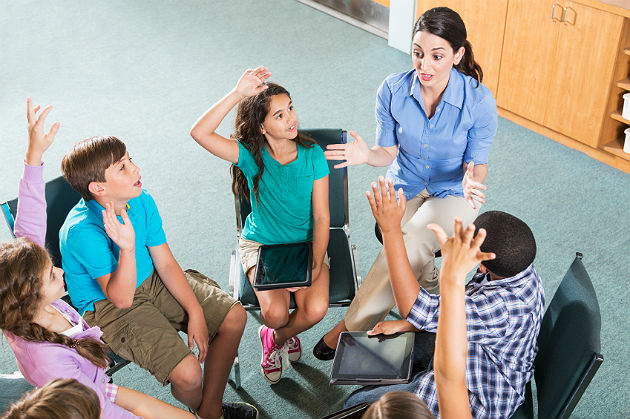 A recent Mind/Shift article by Katrina Schwartz highlighted the efforts by San Francisco middle school principal Michael Essien to get classroom behavior under control in his school.

Essien described his problem in this way: “Students weren't learning because students were having challenges in the classroom with their own academic abilities and or behaviors. Teachers who were trying to teach were having a difficult time getting into lessons because they were dealing with behaviors. It was challenging to hold collaborative conversations among the teachers because all teachers could deal with in any setting was the overwhelming behavior.”

Essien found one solution by helping his teachers develop more engaging, project-based, hands-on learning activities. “I saw that kids who are in public school, if they were exposed to certain pedagogy and had certain content, that they can learn regardless of situation,” Essien said. “Kids had a great time, especially since in the project-based learning they had to produce something in the end.”

Essien’s story touched me personally as I too shared his frustrations. Over the last 10 years as a school administrator, I have seen a dramatic decline in classroom disruptions and general student misbehavior that I believe is correlated to increased student engagement in school.

To understand how far my school has come, it is helpful to know where it started. Consider this scenario. Just ten years ago this was the typical sequence of events when a student become disruptive in the classroom at my New Hampshire high school:

Teacher: “Robert, please pick your head up off of the desk and join the rest of the class on the writing assignment we are all working on.” Robert doesn’t move his head, and a few other students look on, waiting to see what the teacher will do next. With a slightly elevated voice, the teacher says, “Robert, I asked you to pick your head up. You aren’t going to learn anything if you won’t participate in the class.”

Slowly, and somewhat reluctantly, Robert picks his head up just enough to squint at the teacher, making eye contact. He mutters, “Yeah, I didn’t get much sleep last night. I’ll do that assignment later. Thanks.” He then puts his head back on the desk. A few students sitting closest to Robert begin to chuckle and anxiously look at the teacher to see what he is going to do next.

The teacher, in a much more authoritative tone, walks right up to Robert and bends down to talk directly to him while he sat with his head down on the desk. “Robert, I am not going to ask you again. You have two choices right now. You can either do this assignment or you can go see Mr. Stack in the office.” Robert picks his head up, smiles at the teacher, and stands up to make a quick exit from the classroom. Three minutes later, he is waiting for me in my office. Clearly, Robert has made his choice.

In my early days as an administrator, I had many conversations each day like the one I was about to have with Robert in an effort to understand why he would choose to come to my office instead of staying in class. For me, the discussion was a losing battle because I already knew why he left. He was completely and utterly disengaged from what was happening in class.

No matter how hard I tried to motivate him to think differently about his choice, he wasn’t convinced that he should have stayed in class. Worst still, at the time we had a strict agreement with our teachers that if a student was sent from class, they could not be returned before the end of the period.

As more and more students began to stack up in the office area as the period wore on, I and my fellow administrators would often move them to the in-school suspension room where they would remain, often with their friends, until the bell would ring to start the next period.

This vicious cycle continued, day after day. As one might expect, the more students missed class, the more disengaged they became, and the more they wanted to miss class. Like Essien, my staff quickly discovered that the more we engaged in student-centered, project-based, and hands-on activities in the classroom, the most students would be engaged and less likely to act out.

Additionally, we discovered that adding choice and voice options for students continued to reverse the trend of student disengagement.

We also made the same realization that Essien made three time zones to our west. In general, we stopped offering students the choice to stay in class or leave. We found other ways to support them when they were disengaged. Essien realized that instead of asking teachers to send disruptive students out to receive supports, he brought the supports to the student in the classroom.

He called these supports “push ins,” and they were adults who didn’t have teaching roles such as social workers, deans, and academic advisers. “Students ended up learning that, when a teacher calls for a push-in that they were never getting out of class, that somebody was coming,” Essien said. Behavior began to change dramatically, and a new cycle was formed where students stayed in class and found ways to re-engage in their learning.

The model shows promise and may serve as inspiration for other school leaders looking to change the culture at their school.