The politics of bringing bullet trains to the US 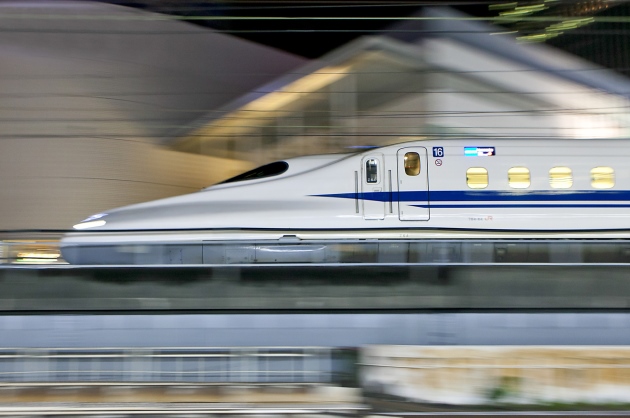 One of Japan's iconic Shinkansen trains approaches a station in Tokyo.

The Shinkansen "bullet trains" in Japan and France’s extensive TGV network are testament to the commitment of some countries to high-speed rail. The U.K. has recently realized it is falling behind and is trying to catch up, but is causing a furor in the process. Even Uzbekistan is in on the game.

The U.S., meanwhile, is still making baby steps. Now, investors who have built on experience on other international projects are now rushing into the U.S. to try their changes.

But who is willing to pay for these pricey projects? And with California’s foray into high-speed rail a decade behind schedule and billions over budget, are voters losing their appetite?

The major obstacle, in fact, is that now the high-speed rail debate has turned into a turf war between Republicans and Democrats, it is difficult to find any clarity on the real costs and benefits.

The U.S. was quick out of the starting blocks with high-speed rail. Afraid of being left behind by economic rival Japan, Congress passed the High Speed Ground Transportation Act in 1965 that laid the way for the 90 mph Metroliner service between Washington, D.C. and New York. Its successor, the Acela Express, is still the U.S.’ fastest train but clocks in at only 150 mph, compared to the 200 mph of Japan’s bullet trains.

Since then, the car has taken over, and there has been little progress at all until recently. The most high profile project has been the controversial California "bullet train", approved in 2008. Other proposals are following in its wake in Colorado, North Carolina, Washington state and elsewhere.

Making the case for high-speed rail

Like all industries, high-speed rail has its own lobbyists — the US High Speed Rail Association. Among the key reasons they give for investing are to provide a more sustainable alternative to flying between cities, a reduction in road accident rates, relieving congestion, and boosting economic development.

However, the benefits of high speed rail are often articulated in terms of dubious cost-benefit analysis (CBA).

Anyone who has learned the ropes of CBA will know that with a little work, they can be made to make whatever case you wish — causing dangers when politicians are seduced by grandiose projects rather than the nuts and bolts of data and evidence.

The problem with high-speed rail is that, if only direct costs are taken into account, it is unlikely it can compete on price with driving and flying. However, once we factor in the true public and environmental costs (the “externalities”) of the latter, the calculation becomes different. The influence of subjectivity on that question, and the difficulty of accurately monetizing some of those costs, is what causes the divided opinions.

The U.K.’s own battle with the high-speed rail question is only one example of how these debates can divide the country. The question of whether high-speed lines can really boost economic development and rebalance countries away from an economically dominant capital is a contentious one.

One size fits all…

American travelers are understandably seduced by Japan’s Shinkansen trains. Do they make sense in the U.S.?

Some have cited the American "love of cars" as a barrier to high-speed rail in the country. But, as this article shows, if the train service is seamless enough then even the most ardent car lovers can make the switch.

However, for a downtown-to-downtown high-speed rail model to flourish, a population should be more concentrated around urban centers. The sprawling suburban model of growth in the U.S. does not lend itself to these sort of travel patterns. A much more ambitious shift in land use and lifestyle is needed that goes beyond laying tracks and hoping for the best.

The alternative is to accept current built environment patterns and work with what we have.

In the U.K., many advocate for targeting spending on the less "sexy" initiative of electrifying existing lines, lengthening platforms and introducing road pricing systems. They might not be as jazzy as the Hyperloop, but these incremental steps can have large benefits.

Who foots the bill?

This brings us to the major barrier. The U.S. electorate, in a "country of entrepreneurs" is notoriously resistant to generous public-funded projects. And the reality is that high-speed rail does not come cheap.

In California, a $100 billion price tag has been publicized, but that does not mean the financing has been secured. In fact, some doubt the funding will ever be found, and less than $30 billion is in place so far.

The federal government under the Trump administration is unlikely to feed these kind of projects with financing. Trump is more easily seduced by spectacular private-financed projects like Elon Musk’s Hyperloop.

He might be more amenable to the Texas approach. Their own $15 billion Texas Central Railway is to be funded by private investors Texas Central Partners (TCP).

But there are concerns over the ridership cost of both public and private-funded projects. Public transport is a notoriously difficult area to make profit, and in order to recoup investments ticket costs are likely to be high. This threatens promises of a genuinely affordable service to a wide range of people, which is vital for really shifting travel behavior among Americans.

High-speed rail is one more policy area that has turned into a political football. California, a Democratic-controlled state, has been forging ahead with ambitious projects.

Meanwhile, Republicans decry these projects are a prime example of wasted public fund, complaining about having to subsidize the nostalgic "hobbies" of train enthusiasts and comparing it to a hobby for typewriters.

In turn, Democrats highlight the complete disregard for the environment that such rhetoric reveals. Bringing back typewriters will do little to combat climate change and the growing problem of wildfires in California.

What the debate does sorely need is a more sensible discussion about the full costs and benefits of travel infrastructure.

While the price tag appears high, high-speed rail investments should be directly compared with the colossal investments in road construction and road widening since the 1950s. High-speed rail is not appropriate for every state, but for some it might be, and we must begin from a recognition that car and plane travel does not come cost-free.