The next generation: Take a kid hunting 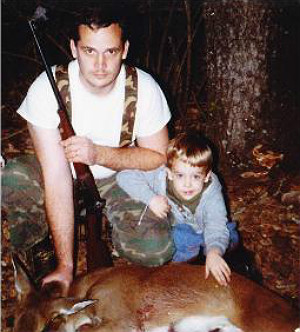 John McAdams with a doe his father shot during his first deer season at age 3.

When I was 3 years old, my family purchased 160 acres of land in East Texas. We spent a great deal of time camping there that spring and summer, and I had the time of my young life out in the woods with my father and grandfather. During that time, they had several discussions with me explaining that they were going deer hunting there during the fall and winter and that I wouldn't be able to come with them.

However, when my grandfather came by the house early in the morning during opening weekend to pick up my father, I met them at the top of the stairs. I asked them “Are you going to the property?”

When they answered in the affirmative, I responded, “I’ll be right back.” Since neither of them had the heart to tell me that I couldn't go, I got to go deer hunting with them then and every year thereafter.

I can’t remember many details of that deer season, only that it was a lot of fun and the start of many hunting trips for me. The downside of this is that my grandfather has not gotten a deer since I started accompanying them on hunts.

However, the joy of being with my father and grandfather out in the woods and the excitement of seeing deer made me a lifelong hunter. Even though he hasn’t shot a deer personally in the past few decades, my grandfather has shared in all of my hunting successes (and failures) since I joined their ranks, and I’m sure he considers that a fair trade.

Though it is a cliche, kids really are the future, and this is especially true with hunting. My grandfather was quite the sportsman in his day, but he is getting on in years and rarely hunts anymore. The fire inside him that burned with love for the outdoors would die with him if he did not pass that torch on for my father and me to carry. 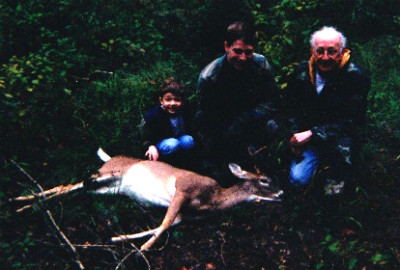 John McAdams, his brother and grandfather pose with a little buck John shot while in eighth grade.

In addition to his love of the outdoors and his many great stories, my grandfather possesses a wealth of knowledge gained from hard-earned experience that would also go to waste without someone to share it with. Fortunately, he has been able to share most of these things with my father and me to continue the tradition.

Along with the sentimental reasons listed above, there are also practical reasons to introduce a kid to hunting. If you turn them on to the sport, not only will you have a potential hunting buddy for years, but they also will be among those who fund conservation efforts through their purchases of hunting gear and licenses as adults.

They are also more likely to vote for public officials and policies that support the continued access to hunting in the future. In short, continuing to expand the ranks of hunters is vital to allow future generations of Americans to enjoy the outdoors.

Yes, it is often times inconvenient to take a kid hunting. They generally have a shorter attention span than adults, and it is much more difficult for them to keep quiet and sit still for an extended period of time. For these reasons and others, having a kid with you makes it much more difficult to seriously hunt for a trophy deer.

However, it might be useful to take a different view of the situation. A kid generally does not get upset about shooting a doe or a young buck instead of a trophy deer. They enjoy hunting because of the pure, unbridled joy of spending time with "the boys" and enjoying the beauty of the outdoors.

They do not get caught up in whether they shot the biggest deer or if they are properly practicing quality deer management. A kid would probably be just as happy, or maybe even happier, after shooting a doe or a four-point buck as many adults would be after shooting a nice 10-pointer.

We would do well to follow their lead and stop getting caught up in all of the other distractions that often accompany the sport and start remembering why we started hunting in the first place: because it’s fun.

I am the hunter I am today because of the experiences I had as a kid while hunting with my father and grandfather. One day, I look forward to introducing my son or daughter to the outdoors and to hunting. Hopefully, they will gain the same appreciation for nature and wildlife that I have, and this may well be one of the biggest lasting contributions that I make as a sportsman.

Keep this in mind the next time you have an opportunity to take a kid hunting, and consider making an investment of your time now for the future of the sport.

Have you ever taken a kid hunting with you?