The MPX is PCC perfection 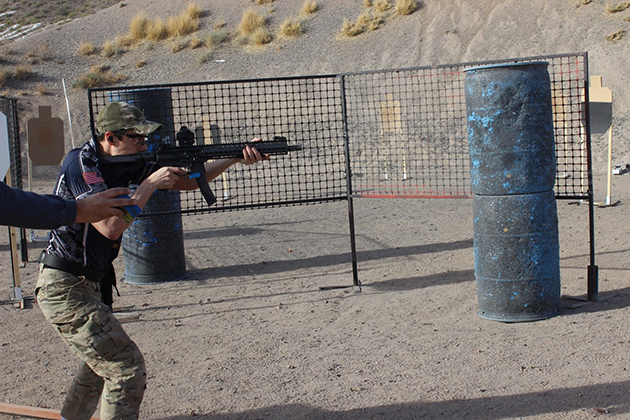 The low recoil of the Sig Sauer MPX hooked me immediately.

Over the course of the last year, I have been fortunate enough to do some extensive side-by-side test-firing of a multitude of PCCs. This includes the MP5, Colt SMG, Olympic Arms, New Frontier Armory, JP Enterprises, Saiga, Quarter Circle 10, Gibbz Arms, KE Arms and the Sig Sauer MPX.

Through these test-fire sessions and match experience, I learned that I am not a fan of the "bouncy" recoil impulse of the blow-back AR PCC design and the odd rearward angle of the Glock magazine-based platforms. Once I fired and reloaded the MPX next to the other platforms, the smooth recoil impulse delivered by the piston system and AR like magazine angle seemed like an answer to my PCC prayers.

I quickly purchased one and after running thousands of rounds through my MPX, including 700 rounds straight out of the box at a major match. I've identified some must-have and nice-to-have upgrades that will turn the already stellar MPX into a game changer. 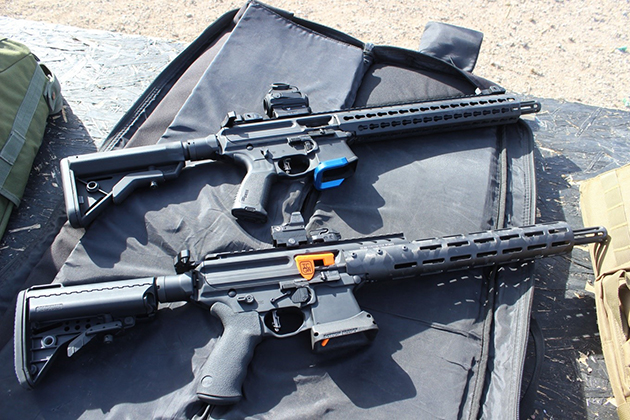 The MPX ships stock with a Mack-truck-heavy mil-spec trigger, which I instantly discarded. I selected the top-of-the-line Hiperfire Eclipse trigger, which is a further refined 24c coated with electroless nickel boron.

I chose this trigger after speaking with Brian Schmittdiel of Hiperfire. Brian explained (in layman’s terms) that they believe their compression springs — referred to as "Toggle Springs" — take more steam off the bolt carrier than traditional hammer spring configurations as the carrier is blown back. This essentially reduces some of the energy from the trigger system.

The Toggle frame that holds the Toggle Springs in place also protects the disconnector from the hammer, eliminating the hammer aggressively smashing into the disconnector, which causes disconnectors to shear off in some cases. With other triggers designs, it's possible that the hammer recoils so hard that it bounces off the rear tail of the trigger behind the disconnector and returns back into battery faster than the disconnector is capable of grabbing the secondary sear on the hammer. This is why you sometimes have hammer follow (e.g., the rifle doubles or more).

I've experienced no doubling with the Hiperfire, and my trigger breaks crisply at less than three pounds. Not all AR triggers area ready for the harshness of the PCC system, so make sure your selection is up to the task.

The next upgrade I installed was a Thorsden Customs Buffer Tube Adapter and AR buffer tube. PCC is an optics-driven division, and getting comfortable behind your glass is critical to success.

While this option is cool, the narrow profile of the stock just didn't have the familiar comfort and cheek-weld my Sopmod stock provides. A few turns of an Allen wrench and the Thorsden Customs Buffer Tube adapter was installed and ready to go. This low-cost and easy-to-install adapter keeps you from having to say goodbye to your favorite familiar stock option.

This is a preference area. Several manufacturers such as Lancer, Taccom and Isler Custom Gun Works have released lightweight carbon fiber handguards that decrease the weight by 50 percent over the stock configuration. Many competitors claim an increase in target transition speed with these lightweight handguards, but that 50 percent weight reduction will cost you hundreds of dollars.

I prefer the weight of the stock handguard as it keeps me slightly steadier off-hand for precision tight shots. 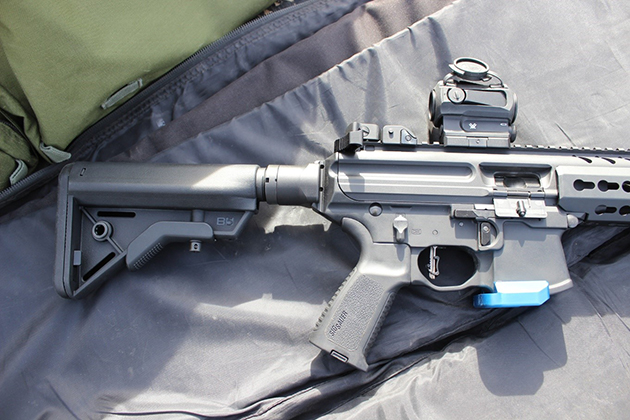 A close-up of some of my upgrades, including trigger, charging handle, magwell, stock adapter and optic.

Part of my side-by-side PCC test-firing comparison included optics from multiple manufacturers such as Trijicon, Vortex, Docter, C-More, Leupold and Aimpoint. In my testing, the Trijicon MRO offered the best glass and field of view I have ever seen on a red dot.

Unfortunately, the five-year warranty on the MRO's electronics was enough to make me forgo this option. Between the harsh PCC recoil and being thrown in and out of barrels, warranty is an important consideration for me.

Several manufacturers offer lifetime warranties on their optics, and I chose a Vortex Sparc AR for its no-questions-asked lifetime warranty and the bonus feature of easy-to-find AAA batteries. I've yet to test the warranty feature, but I have already been saved by the easy-to-borrow AAA battery feature during a match.

The MPX has a generous magazine opening, but it's pretty difficult to stop a competition shooter from shoving a magwell on every gun they own. I find large magwells to get in the way most of the time on rifles, but I'm probably in the minority.

Springer Precision designed a minimalist magwell that attaches to the rear of the opening, and that is what I was looking for. This simple option needs to be experienced to be believed in how effectively "half" a magwell can work, and I find it offers that nice little cushion when my nerves don't quite remember the smooth reloads I practice at home.

Taccom currently makes the traditional large magwell, and several other companies are beginning to enter the market as well. A magwell isn't a critical upgrade, but I find the modest investment-to-performance gain to be a deal.

This is another optional upgrade area, but for me it was a must-have. The MPX charging handle and bolt assembly are not retained and have an annoying tendency to just fall out whenever you separate the upper and lower.

Sig has stated this is "normal" and offers no solutions to the problem. Thankfully, Next Level Armament and Radian Arms released extended ambidextrous charging handles that include a metal "lifter" block to keep the charging handle retained during disassembly and raised during its draw stroke.

I selected the Next Level Armament version and find the extended wings of their charging handle drastically easier to find under pressure versus the stock option. It's a shame the end user has to spend close to $100 to fix something Sig could easily and cheaply remedy in future versions of the MPX. 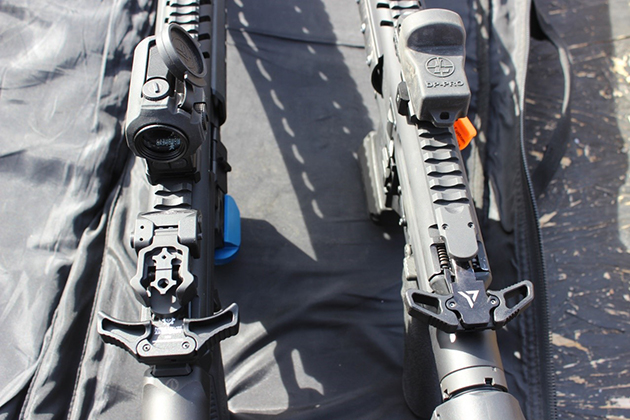 A comparison of my Next Level Armament charging handle (left) and the Radian Arms version (right).

Magazines are as equally important in PCC as the firearm itself. Everything is a trade-off, and what the MPX gains in the familiar and easy-to-reload AR type (or MP5 if you like) magazines, it loses in the fact that it requires proprietary magazines that run northward of $50 apiece.

Sig missed the boat by not having a lower-cost magazine option when trying to introduce their new platform, but I'm sure prices will go down as the platform is more widely adopted. Luckily, you only need a few magazines to complete most USPSA or other organizations' PCC stages, and adding a magazine extension increases your capacity with your pricey magazines further.

Springer Precision has long been accepted in the USPSA and IDPA world as a top manufacturer of magazine accessories, and I selected a +10 round extension and weighted basepad for my needs. The +10 gives me 40+1 rounds ready to go and includes an extended spring with no worries of a binding follower to hang up internally. The extra weight of the extension basepad aids the magazines in quickly falling free. 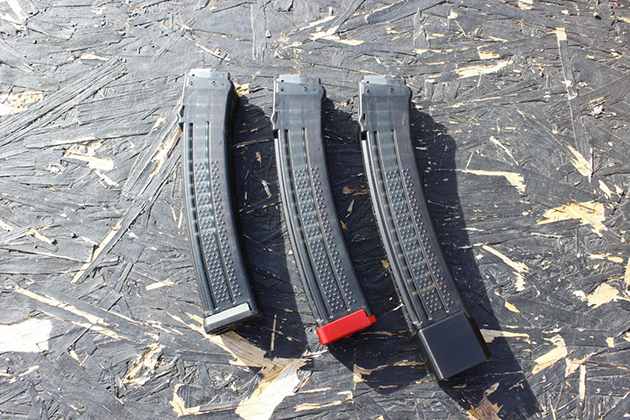 Working magazines don't help you if you have nothing to carry them in. The length of the MPX magazine can cause them to snag or fall out if not properly retained.

I discovered this too late during a match when I attempted to transition from a car obstacle to an array of targets and found myself grasping at an empty belt with no idea what had happened. I was forced to locate and pick up my previously-ejected magazine and pray I had enough rounds to finish the course.

Since that mishap, I have elected to use a mix of Sig Branded Blade-Tech open-style pouches and have at least one magazine in a fully closable Velcro pouch just in case things get a little bumpy during a stage. Several custom Kydex manufacturers offer deep-seated pouches, but the wait times are mounting due to the heavy demand. 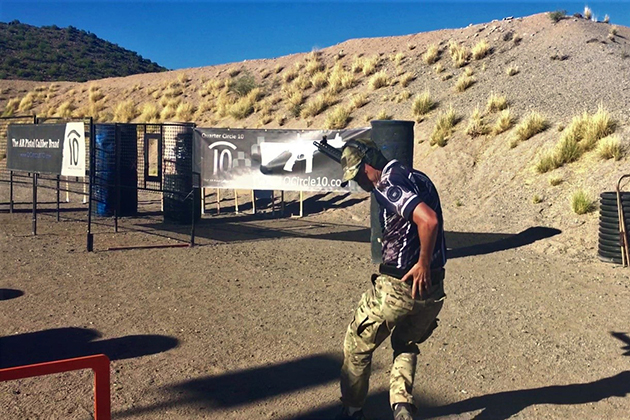 The length of the MPX magazine caused me to lose my spare magazine during a stage.

I am happy to report that the MPX and all the aforementioned installed upgrades have performed flawlessly with each other through thousands of rounds. The MPX and these upgrades aren't cheap, but I've found the performance the upgraded MPX gives is worth every penny.

If your budget is tight, you can start with a spare magazine, magazine pouch, an aftermarket trigger and an optic and still experience the low recoil and ease of shooting the MPX provides. As more shooters take their first shots with the MPX, I believe shooters chasing the podium will start making the switch in droves.

The traditional AR platform serves me well in 3-Gun and at work, but in the PCC game the MPX reigns supreme.