The low down on foam rolling 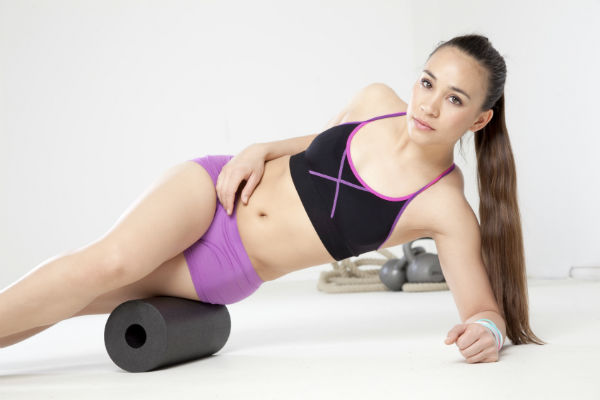 Foam rollers have been around for a while now and have become a permanent feature in the weekly routines of all levels of athlete, from professional to weekend warrior. Their most common use is for something called "self-myofascial release." But how many actually know what that is, how it works and what we are trying to achieve by rolling up and down on these torturous cylinders of foam?

What is self-myofascial release?

The clue really is in the name:

Many people look at SMR as a form of self-massage that can replace or reduce the frequency of professional sports or remedial massage appointments. The aim, when rolling, is to improve soft tissue flexibility and to release "tight" areas. Some people also use SMR after exercise with the aim of reducing delayed onset muscle soreness (DOMS).

In order to begin to understand the role of SMR, you need to know a little about the anatomy of the fasciae and muscles. Bear in mind that this is a simplified and abridged version, providing the basic knowledge required to understand the purpose of SMR. Far more in-depth information is widely available for those looking to really dig into the specifics.

Fascia is a form of connective tissue that runs continuously throughout the body from head to toe. It encases our muscles and other soft tissues and is thought to be a passive structure that may assist movement by the transmission of mechanical forces produced by the muscles and tendons.

There has been a suggestion in recent years that the fascia itself is capable of producing contractions similar to a smooth (involuntary) muscle. If proven, this would clearly increase the importance of the role of fascia and in turn the importance of fascial health — but this is a topic for a whole other article.

As well as transmitting forces, fascia enables a smooth gliding between all of the different layers of soft tissue. Fascia, like muscles, can become injured either through a sudden force or impact, or the kind of repetitive overuse that develops through poor posture, muscle imbalances, movement dysfunctions, overtraining and inadequate rest.

Another term you will have probably heard in relation to SMR is "trigger points" (aka knots). Myofascial trigger points are often described as hyperirritable points in the fascia, located within a taut band of muscle. They feel like a hard lump, varying in size from that of a pea up to 2-3 cm in diameter.

Applying pressure to a trigger point usually causes acute pain, which may be referred to another location away from the point of pressure. Trigger points are thought to affect muscle function and reduce the available movement at a joint. This inevitably affects our movement patterns and can have a widespread and longstanding impact.

How to apply SMR

Most areas of the body can be effectively "foam-rolled," but most commonly it is performed on the leg muscles. The general principle involves slow rolling up the muscle and sustained pressure on any tight bands and trigger points.

At most, foam rolling can be performed three times a week. The tissues need time in between to recover — just as they would from a deep-tissue form of massage or a heavy workout. The total time spent foam-rolling depends on how many areas you are working on, but I suggest no longer than five minutes per area (calves or quads for example).

Start at the point of the area furthest from the heart and slowly roll upward. Once you feel any tender, tight spots you can hold the pressure on until it starts to ease. I recommend a maximum of 20 seconds static pressure (to avoid tenderness or even bruising). Small back and forward "oscillations" here are fine to try to work a bit deeper into the tissues.

Once you reach the top of the area you are working on, stop and return to the bottom before rolling up again. Ensure you change the angle slightly so you cover the inner and outer aspects of the muscle group, too.

The biggest controversy over SMR is probably regarding its use on the IT band. This sometimes troublesome band runs down the outside of the thigh from hip to knee and can cause a condition commonly known as "runner's knee," or IT band syndrome.

Historically, myofascial release has been applied to this thick band of fascia in an attempt to loosen it and reduce the pressure at the lateral knee. However, more recent thinking suggests that this is a rather painful waste of time.

Studies have shown this form of treatment cannot "lengthen" or reduce tension in the IT band, nor should we want to — this structure is important for both hip and knee stability. Treatment now focuses more on strengthening of the hip abductor and VMO muscle groups.

There are, of course, those who doubt the efficacy of foam rolling, period. There is little good quality research to really prove its efficacy. However, a recent systematic review of literature regarding SMR (read it here) concluded that current evidence suggests benefits for joint range of motion and pre- and post-exercise muscle performance. They do, however, state that literature is still emerging, and there is no current consensus on an optimal SMR program.

Foam rollers are not just for SMR, you know. They are also great for numerous other exercises — strengthening, stretching, posture correction and proprioception (balance) in particular. My favorites include lying with the roller along the spine to stretch the chest muscles; a tough supine bridge with hamstring curl and a variant of the "Superman" exercise, balancing hands, knees or both on the roller(s).

My biggest concern over the persistent use of foam rollers for SMR is really the question of why is the individual foam rolling? If this is a long-term solution to "tight muscles" and trigger points, would they not be better off focusing on correcting the root cause of these muscular abnormalities?

Looking at it simplistically, trigger points and the like develop due to increased stress in these tissues. Usually, this increased stress is due to poor posture, muscle imbalances and movement dysfunctions. So, rather than rolling around on the floor on top of a hard lump of foam, should we not be looking at correcting these underlying issues?

That said, I am not against foam rolling, and I do prescribe it to my clients on occasions where I feel it would really help. This is usually on a short-term basis — to be performed a couple of times a week — while we also work on correcting the cause of these issues.