‘The greatest’ marketing lessons from the life of Muhammad Ali 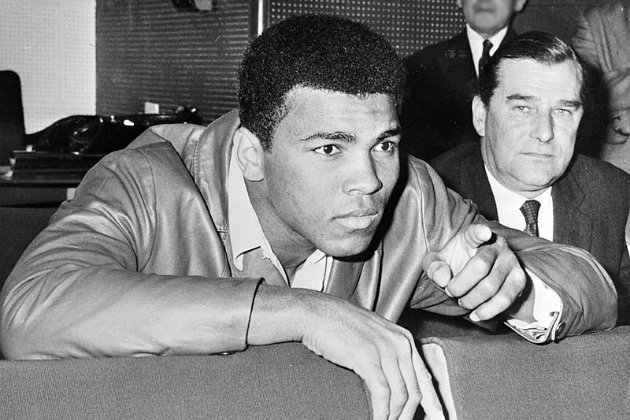 Muhammad Ali was a marketing master. Whether he was promoting himself or his next fight, Ali knew how to pull the right strings to draw an audience.

This is a feat that should not be taken lightly.

Take this into consideration: As a black man in America during the 1960s, Ali convinced millions during America's era of racial segregation to both lend him their ears and agree with him that he may be, possibly, the greatest of all time.

You can understand why marketing experts and advertisers would be wise to look into his life and career and consider his methods. Let's break down three tactics Ali employed over the years.

When Muhammad Ali — then named Cassius Clay — first fought for the World Heavyweight Championship, he was relatively unknown. He also had the misfortune of being matched against the reigning and defending powerhouse of a champion: Sonny Liston.

It may be hard to imagine, but at the time, most people didn't give Ali a chance. In fact, many dismissed the fight as almost farcical with many boxing analysts convinced Ali wouldn't make it out of the first few rounds.

From a business standpoint, this could be disastrous. If everyone feels they know the outcome of a contest in advance, why would they pay money to watch?

Guerrilla marketing is a great and unconventional strategy for businesses with smaller budgets to promote products and services. The methods usually involve imaginative concepts that focus on grabbing the attention of the public in a surprising, if not a covert way.

True to the definition of the term, Ali rented a bus and rode by Liston's home at around 3 a.m., screaming into a megaphone and begging Liston to fight him on the spot. Most importantly, however, he had the media in tow.

In this improvised and extremely personal setting, Ali drew the media, and thus the viewing audience, into the conflict. On Liston's front steps, the whole country was allowed to pick a side and become invested.

No one had a more contrasting personality from Ali than his boxing nemesis, Joe Frazier.

Where Ali was gregarious and boastful, Frazier was the blue-collared, humble "everyman." And while Ali had to convince people to care about his match with Liston years prior, Ali didn’t have that to worry about this time for what would be known as the "Fight of the Century."

In fact, everyone cared about his match with Frazier, because many wanted Ali to lose.

Approximately six years after he had conquered Liston, Ali found himself in another quandary. For one, he had stood up against the Vietnam War draft and came off as un-American for many. Secondly, his continued affiliation with the Nation of Islam made him relatively unpopular to those in middle America.

Ali decided to use that to his advantage. Rather than market himself as "The Greatest Fighter of All Time," Ali began marketing himself as a heartless bully.

He began to incessantly disparage and mock his opponent. And what wouldn't have possibly worked on the intimidating and honestly scary Liston, worked like a charm against the much more subdued and quiet Frazier.

According to Cory Franklin for the Chicago Tribune, "Muhammad Ali's superlative boxing and verbal skills, along with his ability to touch people's hearts, lifted him to iconic status. But on one count — his relationship with Joe Frazier — Ali was anything but a hero."

Franklin continued, saying that Ali "callously referred to Frazier in appalling racial terms — specifically as a 'gorilla' and an 'Uncle Tom' ... The reality was quite different."

Ali's jokes and taunts, while making him a hero to some, made him repulsive to others. And while everyone who was anyone in the boxing world — fighter and spectator alike — tuned in to see Ali, the majority only tuned in to see him lose.

This is the downside to a negative marketing campaign. A good contemporary example is the presidential campaign of current Republican presidential nominee, Donald Trump. Businesses that choose to market themselves by mudslinging at the competition run the risk of alienating more consumers than they draw.

It's a risky endeavor for which Ali ultimately paid.

Joe Frazier was the first to defeat Ali, famously knocking down Ali in the 15th round with a left hook that broke his jaw and silenced him — at least for the time being.

Perhaps the best form of marketing that Ali employed was his storytelling. Never was this more apparent than when Ali faced his two most fearsome foes: George Foreman and age.

In what would be known as the "Rumble in the Jungle," an aging Ali had fought his way back from his Frazier loss to once again contend for the heavyweight championship, but this time it was against a much younger and much stronger foe.

Storytelling marketing is nothing new. According to Forbes contributor Susan Gunelius, "Brand storytelling isn't a new concept, but with the explosive growth of social media and content marketing, the opportunities to tell stories as part of direct and indirect brand marketing initiatives have become a strategic priority."

According to Gunelius, storytelling marketing must:

Leading up to The Rumble, Ali was honest about how boxing analysts were counting him out due to his age and previous loss to Frazier, a man who Foreman just recently decimated to win the championship.

This epic tale that Ali spun through interviews and press conferences included such colorful personalities as Don King, James Brown and, of course, the intimidating force of destruction, George Foreman. Meanwhile, Ali cast his own character as the aging and battle-worn warrior-king obsessed with reclaiming his throne from the unbeatable, indestructible monster.

Audiences ate it up.

The element left was the conclusion, fight night, which saw Ali pummeled for a good amount of the fight, only to come from behind and knock out Foreman in the later rounds. It was the perfect storybook ending to a long and dramatic narrative created equally by circumstance and Ali's own marketing genius.