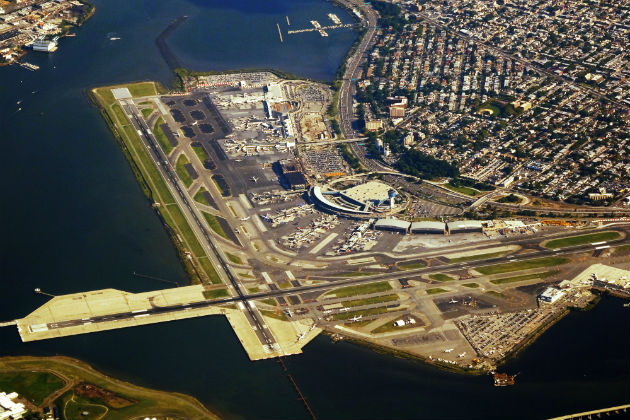 A look at LaGuardia Airport today.

Airport officials announced last month that New York's LaGuardia Airport would receive a $4 billion overhaul that would rebuild and revitalize the crowded terminals and airside areas. The initial response for many was that it couldn't come a minute sooner.

However, with the dust settling on the announcement, criticism has come forth from different areas highlighting a number of potential flaws.

To summarize, the Port Authority of New York and New Jersey (PANYNJ) announced a plan that will see the systematic demolition of LaGuardia's existing three terminals — B, C and D — and a new single structure built in stages to replace them. This will stretch closer to the Grand Central Parkway, allowing more space to be created for aircraft to maneuver around their gates, and the addition of new taxiways.

Passengers will access some gates via aerial walkways over the aprons and taxiways. The terminal will be more spacious, open and feature new concessions.

Construction on the first phase of the project would begin next year, pending final approval by PANYNJ, which owns the airport. A second phase would be overseen by Delta Air Lines, which has agreed to the plans for rebuilding the terminals as LaGuardia’s dominant operator.

Among the first criticisms to come following the announcement was one aimed at the wider problems with New York's transportation, which the plans do little to solve. The biggest issues are the crowded rail connections to Penn Station and the car parking available at the airport. A group called ReThink NYC has proposed building an intermodal transport hub linking to a new area of aircraft parking gates and terminals built on reclaimed land, and runways extended to full length to improve safety. 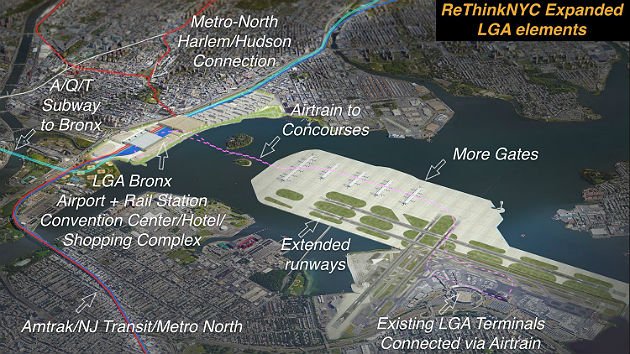 
"I thought, 'I have other ways to spend $1.4 billion,'" lead designer Jim Venturi said. "And eventually I thought to myself, 'Well instead of criticizing someone else's things why don't I come up with my own ideas?'" Detailed designs for his ideas are have been made available.

One of the most notable voices of criticism was Chelsey Sullenberger, the captain of US Airways flight 1549, which landed in the Hudson River shortly after departing LaGuardia in January 2009. Like ReThink NYC, he also focuses on the lack of a plan to lengthen the airport's two runways.

At present, they are bound by the East River and, while sufficient for most flights, are much shorter than other major airports. The runways have seen a number of incidents, including a Delta MD-88 which crashed through the fence while landing in snowy conditions last year. At least three other incidents have occurred in which the short runways resulted in damage to aircraft and loss of life.

Sullenberger told 77-WABC Radio the runways put pressure on pilots to get things right: "You must have the airplane flight path exactly aligned with the runway. You must touch down at the right altitude at the right speed to allow all that to happen. Often there are winds that you have to contend with, sometimes low visibility, sometimes snow and other challenges, sometimes convective thunderstorms in the summer."

Still, other comments suggest LaGuardia is not worth the investment when underutilized airports at Long Island MacArthur or Stewart International could be developed with much more of a clean slate and room to do justice to the needs of New York's traveling public.

The redevelopment of LaGuardia is set to go ahead as planned, and there's no question over its need — it has just topped the poll of the most delays in the country, after all. But by opening up to development, a number of additional solutions to problems such as the runways and limited gates may inevitably lead to discussions about further developments to handle future growth.