The Flying Circus: Why do I get the good ones?

Henry brought in the Circus Chronicle the morning after I had crashed the Hathaways’ new Piper Archer off the end of the runway.

Underneath was a picture of the four of us being questioned by the paramedic near the bug infested evaporation field. Under that was a photo of the wreck. Coverage of the accident included a statement from Leanne.

"Flying Circus office manager Leanne Rains said that the company will continue with plans for an open house tomorrow. `If the accident investigators have finished with it in time,' Mrs. Rains said, `we will have the crashed aircraft on display. We want the public to see that flying is safe even when an off-airport landing is necessary.'"

The story continued, "Accident investigators are expected on the scene today. They are hoping to find what caused the airplane's mysterious loss of power."

“You coached Leanne well,” I said. “So we’re going ahead with the open house?”

“I think we should. I expect the wreck will draw a crowd. They’ll see that Circus has a new flying school.”

The government accident Investigator arrived. Pierre Savoir was a short, trim man with the firm handshake and brush-cut hair of a former air force pilot. He seemed friendly and easygoing. He listened to my description of the brief flight and then asked for photocopies of the last few pages of the aircraft logbook.

"It's routine procedure," he explained.

"There is only one page," I said. "It was a brand new airplane."

I copied the Journey Log page and handed it to him.

"Thank you. Are you guys coming with me to the scene?"

"Certainly but you'll have to drive your own car. Mine is full of the tools of the trade," he said. "I'll follow you since you know where it is. I take it we are headed for a bug infested swamp."

"Worse," I replied, "but how did you know? Is my face still that swollen?"

"No, you're wearing rubber boots and insect repellant. It's not normal attire for a flying instructor."

"Would you like some repellant?" I asked, pulling a bottle of bug lotion from my pocket.

“Okay. We’re going to a sour milk evaporation field next to the local dairy.”

“Swell. Why do I get all the good ones?”

We followed Pierre out to the parking lot and waited while he pulled on his boots. We could see all-weather clothing, rope, camera equipment, shovels and cutting gear in the back of his government station wagon..

We drove around to the other side of the airport. There was a policeman guarding a barricade at the entrance to the dirt road leading to the wreck. Pierre showed his credentials and arranged for the two cars to drive in. We parked on the bridge at the edge of the field. Pierre stepped out of his car and looked at the layer of milk at the base of the grass.

"I should have brought my cat," he said with a smile. "He would have liked this." 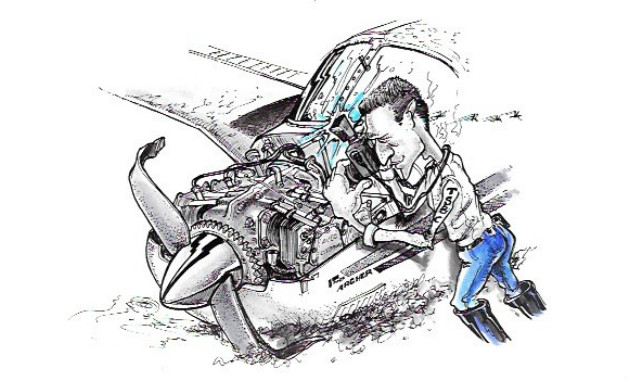 
Henry and I walked with him to the airplane. It took Pierre less than five minutes to find the cause of the engine failure. He lifted off the front cowling, looked around the engine compartment and pointed to the braided fuel hose that was supposed to be connected to the carburetor. It was sticking straight up.

"It won't run like that," he said and then looked at me. "You were lucky there was no fire. With both fuel pumps running on takeoff, there would have been gas pouring out of here just above the exhaust."

"What would have caused that to come off?" Henry asked.

"Nothing if it had been put on right," Pierre said. "The airplane might have come from the factory with the hose on finger-tight and it took this long to vibrate off."

He took a picture, picked up the cowling and placed it over the engine.

"I'm done. You can tell your insurance company that I have released the wreck."

"There's a little problem with that," Henry said as we headed back to the cars. "It could be Buzz Billing's insurance company or ours. I talked to both of them yesterday and there is some dispute over who should cover the flight."

"Well, I'll leave it to you," Pierre said. "I'll tell the cop that I have released the airplane. As soon as I do that, he will leave and you'll be on your own."

"Thanks, Pierre," Henry said as we reached his car. He shook our hands.

Henry and I went back to the airplane and took the radios out. They were the most expensive, easiest to remove parts. Then we headed back to the office in his car. It was 09:00.

"It's going to be hard getting that thing out of the swamp," I said on the way.

"I know," Henry replied. "I'll call Darcy at Derry Air and ask him to bring his flatbed trailer down, help us take the wings off and haul the wreck to the hangar until the insurance gets settled."

"Okay. I'll gather up some tools and put them in your car. We might as well get started."

Henry turned his Pinto onto the airport entrance road. We found The Flying Circus parking lot plugged with three big hydro trucks, one with a trailer with a backhoe on it. We parked on the side of the road and walked to the office. Inside, the lounge was crammed with orange-suited hydro workers and their foreman Bruce Stanwick. Bruce was a flying school customer who worked for Circus Hydro.

Leanne was serving them all coffee.

"Hi there," Bruce said. "I heard about the crash. Glad you’re okay. The boys and I are on our way to a job and thought you might want a hand."

"Hi, Bruce," I said. "The investigator has released the airplane but we haven't started taking the wings off."

"Do you want the wreck in the hangar?" Bruce asked.

"Well, we could do it now with the wings still on using the backhoe and trailer."

“Bruce, that’s very generous,” I replied, “but it would mean blocking a 30-foot wide county road hauling an airplane with a 35-foot wing span. I don’t think you can do that.”

“Blocking county roads is our specialty,” he replied with a grin.

Bruce and his men stood up. The thanked Leanne for the coffee, put their boots on by the door and headed for their rigs. Henry and I looked at each other in disbelief.

We followed the men out the door. Bruce jumped into the truck pulling the backhoe. Henry and I climbed into the Pinto. Henry turned it around and led the convoy to the crash site. We turned down the county road that ran past the wreck. The crew in the last truck stopped and set up a roadblock. A flagman directed traffic to the next road. The men in the second truck did the same thing at the next intersection.

When Bruce reached the farm path, he backed his rig and trailer all the way to the bridge. Henry and I followed in Henry's car. We watched as two men unloaded the backhoe. Its front-end loader was fitted with two long wire spool spikes. The operator drove across the milk-soddened field. Following hand signals from Bruce, he slid the spool spikes under the wrecked airplane and lifted it. He drove slowly back to the bridge and gently placed the dripping Archer onto the trailer.

Bruce followed us in the hydro truck pulling the trailer. He stayed in the middle of the path with the Archer's wings sticking out each side. The backhoe was being driven behind him. The whole entourage turned left and headed to the entrance side of the airport. When we reached the main road, the hydro crew had it barricaded. The flagman was talking to the drivers of the first cars being held up. Henry and I scooted ahead so we could pull the airplanes out of the hangar to make room for the wreck. By the time we had the three airplanes out, the hydro truck and trailer pulled up to the opening. The backhoe operator picked up the wreck, carried it into the corner of the hangar and placed it on a set of sawhorses that Henry and I had set up. Then he drove his rig back onto the trailer.

"Well, I'll see you at the barbecue tomorrow," Bruce said to Henry and me.

"I don't know how to thank you," Henry said. "You saved us at least a full day's work and a lot of expense."

"Happy to help," Bruce replied with his shy smile.

"Tell your men they're welcome to join us for a steak on a bun tomorrow," I said.

He swung into the hydro truck cab and drove off.