The end of the month brought the official weigh-off for the diet contest that I had cooked up with Dave Michelin. We held it before he departed on his first solo flight to his cottage. We had advertised the competition in The Flying Circus newsletter just for fun. The article generated interest with the staff and customers. Side bets developed. Half the group wagered on the fact that Dave ate too many donuts and the other half bet that he had more to lose.

There were several people present for the weigh-off. Dave wouldn't allow anyone to see the numbers except Leanne. He made me go first. I climbed on the scales behind the counter. Leanne raised an eyebrow in surprise. She wrote down what she saw. Dave made me go back to the other side of the counter. He climbed on. Leanne's eyes popped.

Cheers went up from half the group.

"You didn't," she said. "You win because you only gained four pounds."

"Well, Dave," I said, "I'd offer you double or nothing but if you gain any more, the Lake won't fly."

"I didn't know donut holes had so many calories," Dave said. "I'm going back to cream filled.

Dave flew to his cottage with Whiskey. Several days later he returned to The Flying Circus with a sheepish grin, a box of donuts and no airplane. He told us what had happened.

He had flown north and splashed down on the lake without any trouble.

"The Tooth Ferry flies better without a heavy-duty instructor," he declared. "The doors didn't even leak but we should have practised more docking. I approached the cottage with the shoreline on my left, just like you showed me but I had brain fade. I thought I was driving my boat. I charged the dock and reached for the power lever to throw it in reverse," he said with a chuckle. 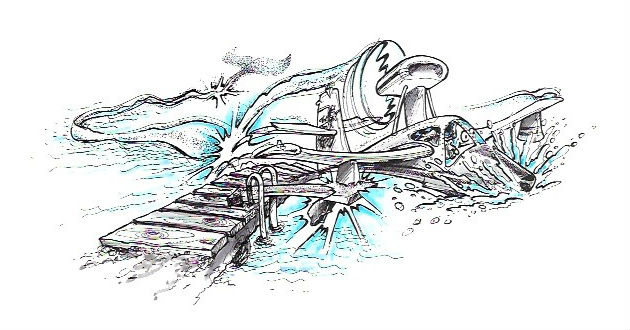 
There was no reverse. The two-ton flying boat continued unabated. The bow slammed into the floating wooden wharf and pushed it down. The airplane climbed over it and dropped into the lake on the other side. The damage would have been restricted to paint off the keel except for the sagging old diving board at the end of the dock. The pontoon hanging under the right wing caught the diving board and was sliced in half. When the airplane came to rest on the other side of the dock, Dave's weight kept the right wing out of the water. He paddled the Lake back to the dock and tied up.

Dave and Whiskey holed up in the cottage until his wife went up on the weekend.

"That's four days without a donut. I thought old Whiskey was going to pass out. I kept him alive with sausage, popcorn and beer but it's not the same."

When Dave got back to Circus he called Darcy. The aircraft mechanic drove up north with tools, a helper and another pontoon. They spent two days eating and sleeping at the cottage while replacing the float. I was in The Flying Circus office when Darcy flew in with the repaired Lake. Dave was there to meet him. The new float was painted in green chromate primer.

"It looks like a rotten tooth hanging below the wing," I said.

"Hey, it looks better than the last time I saw it," Dave replied.

Darcy shut the engine down and jumped out of the cockpit.

"She's all fixed up for you Dave. I'll paint the float to match the airplane when the cottage season is over."

"He just wants to see if you'll whack the diving board again before he paints it," I said with a laugh.

"You figure he's learned his lesson?"

"No, I know he's a pilot, same as you so I took the diving board off the dock."