We had a problem. Leanne ran small word ads in the local newspaper about learning to fly. She placed them in the personal column mixed in with lonely hearts, bankruptcies and drug counseling.

“Get up in the world! Learn to Fly at The Flying Circus”

“Higher learning at The Flying Circus”

“Reach for the sky at The Flying Circus”

They were working. Our two-man flying school was getting busy. Henry and I were flying all the time. The problem was the new customers prevented us from teaching Barry McDay his instructor course. Barry was our key to getting some time off but not until he was qualified.

A rainy day finally gave us a break. Henry and Leanne stayed home. Barry and I used the time for him to practise ground briefings in the office.

Ray Tragunno walked in. I had instructed with Ray at a previous flying school. He now flew for Major Airlines as a first officer on a Boeing 747.

Barry and I joined Ray for a coffee.

"Ray, this is Barry McDay. He's working on his Instructor Rating."

Ray spoke in deep, slow tones. He had the ideal airline pilot voice.

"Pleased to meet you."

"Ray worked with Henry and me at Derry Air," I explained to Barry, "until Major Airlines hired him to do nothing in a 747 and get paid big money."

"Tell me," he said, "how's this little venture of yours going?" The tone of the question was not condescending but it was close.

"No, I probably won't, but you're going to tell me anyway, aren't you?"

"We're so busy," I continued, "that we had to hire Henry's wife full time just to count the money."

I was exaggerating but Ray liked a joke. I also knew his income was fixed and that it would bug him to think someone was making lots of money in private enterprise.

"The trouble is we don't have time to spend it. The money keeps piling up in the bank while we're stuck flying every day."

Ray sipped his coffee before replying.

"We're busy here. These guys are having trouble doing my course."

"It's true, Ray," I added. "We could use your instructing help, at least until Barry gets his rating."

"Not me," Ray replied. "I defied death enough to last a lifetime."

"So you won't even consider a day or two a week."

"Never in a million years."

I let the suggestion drop. We talked about his airline flying. 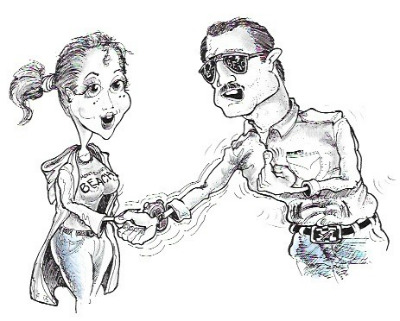 A few minutes later a pretty girl about college age bounced through the office door. She was wearing a bright yellow rain slicker, sneakers and well-fitted jeans. The three of us stared while she closed the door and flipped off her hood, unleashing a blonde pony tail. She unzipped the jacket. Underneath was a T-shirt advertising Monterrey Beach.

She looked at the three of us gawking and gave us a big smile.

"Good morning," she said in a cheerful husky voice.

Ray stood up. The tall, dark, handsome and married airline pilot walked toward her. "Good morning to you," he said in an extra friendly voice.

The girl tilted her head back to look at him as he approached. She held the smile. "Welcome to the Flying Circus," he said, extending his hand. She accepted the handshake. "I'm Ray Tragunno. I'm one of the flying instructors here."

He made it sound important.

The girl looked quickly at Barry and me and then back to Ray.

"Sarenna Salts," she replied. "My friends call me Summer."

I watched the sun over Monterrey Beach on the T-shirt rise and set with each breath that the young girl took. I missed the joke in the name. So did Ray.

"Cool. Let me show you an outline of the pleasure pilot's course."

Without taking his eyes off her, Ray held his hand out behind him. It was obviously my cue to produce the outline.

"Do you live around here?" Ray asked.

"I go to the university," she replied.

"That's interesting," he said. "What course are you taking?"

"Sports medicine," she said and then added, "with a major in gymnastics."

I started to catch on. She called herself Summer Salts and was majoring in gymnastics; this girl was either living a humorous coincidence or she was killing us with one-liners. I gave Ray a course handout.

"Have a seat and I'll go over this with you," Ray said, gesturing to one of the classroom tables. "Would you like a coffee?"

As she sat down, she smiled at Barry and me. I smiled back. Barry gave her a nod. Ray pretended that we didn't exist. He read the course outline to her. Then he explained that he'd like to take her up on an introductory flight but the weather was not suitable.

"I help out here one or two days a week," he said. "The rest of the time I fly a Boeing 747 for Major Airlines out of Toronto."

"That's fascinating," Summer said. She made it sound genuine. "It's wonderful that you take the time to teach others how to fly."

"It's the least I can do," Ray replied. "Let's see if we can schedule a flying lesson for you when I'm available again."

"I'm sure Captain Tragunno will take good care of you."

"I hope so," she replied with a big smile.

Ray drew her attention to the schedule. "Tomorrow I'll be flying a 747 to England but I'll be back on Friday. Would you be available then?"

"Friday afternoon would be fine," she said.

I booked them an airplane. Summer endured a few more minutes of small talk from Ray and then said goodbye. Ray watched her go all the way to the parking lot. I was the first to speak.

"Just trying to help out," he replied.

"Well, let's wait and see if Summer is going to take flying lessons."

"No deal. You either sign up for at least one day a week of instructing or I'll let the younger, more single Barry McDay fly with little Miss Monterrey Beach on Friday."

"Not quite," I replied. "Blackmail is when I threaten to call Helga and tell her you're flying with cute young blondes in tight T-shirts."

Barry jumped into the conversation. "Try it for a few weeks, Ray. If you don't like it, I'll be ready to take over your customers. We get a lot of students from the university here."

"Well, okay, for a couple of weeks, just to help out. Don't get the idea that I'm doing it just for the pretty girls."

"What makes you so sure?"

"Why didn't you say so when she was here?"

"I was having too much fun watching her handle Mr. Macho Airline Pilot," he said, "I didn't want to spoil it."

"Well, her timely visit landed us another flying instructor. You say she doesn't want to take lessons?"

"No. She was here just for a friendly visit. Flying is not exciting enough for her. She is more of the skydiving type. I told her to drop by and say 'Hello' anytime it was raining and she was bored with school."

"So we have to cancel her introductory lesson?"