We crossed the departure end of the runway passing through 300 feet. The Hathaways’ new Piper Archer climbed easily despite the full load. Margaret Hathaway was flying. I was in the right front seat. The engine was loud at full throttle but in a deep, satisfying way.

“I love it!” Margaret beamed.

Her husband Glenn was riding in the back along with the local Piper distributor, Buzz Billings. We returning Buzz to his home airport following the delivery of the new airplane.

I daydreamed a few seconds inside the wall of noise and thought how nice it would be to have a new airplane like this for the flying school.

The dream was shattered by a sudden silence.

There had been no warning, no burp or sputter. The propeller was windmilling but the engine was dead.

Margaret and I exchanged startled looks.

"What did you do?" we both exclaimed at once.

I pushed forward on the control wheel.

"I have control!" I declared in a loud voice.

My actions were automatic and deliberate. I had many hours practising engine failures after takeoff with student pilots. I pointed the nose down, set up a glide and turned slightly left. I knew that the Dairydale Dairy sewage lagoons were straight off the end of the runway. I headed for the field beside the lagoons.

There was nothing automatic or deliberate about what was going through my mind. It was racing to figure out what had killed the engine. I had about 10 seconds before this brand new airplane would be landing across the ditch-filled pasture. I could feel Buzz Billings pulling on the back of my seat to lean forward. He didn't say anything. Nobody said anything.

I glanced down. The fuel selector was on "left", the tank was three quarters full, the ignition was on "both", electric fuel pump was "on", throttle was "full", mixture was at "rich" and the fuel primer was locked. I selected carburetor heat "on" although I didn't expect that ice was a problem on this balmy summer day.

One hundred feet to go.

"I'm going to land in this field," I said loudly, pointing left of the ponds.

"Seat belts tight, everybody; eyeglasses off."

I traded hands on the control wheel long enough to reach up and unlatch the door at the top. I should have warned my passengers. The door popped with a load bang followed by the "swoosh" of wind blowing passed the crack. Margaret let out a short scream which failed to drown out the noise of a startled Billings cracking his head against the roof.

I concentrated on the landing. I searched vainly for the smoothest section in the long grass. It all looked the same from that low altitude but I knew that there were ditches in the field. Just above the ground, I raised the nose and lowered the flaps with the lever between the seats to slow down. I continued to pull the nose up. The stall warning horn sounded. I held the control wheel all the way back. The Archer flopped into the field. I stood on the brakes. The left main tire dropped into a hidden ditch almost immediately and sheared off. The left wing dug into the ground. The airplane slewed left. I pushed full right rudder. We bounced and banged our way across the field. It sounded like we were inside a steel drum being rolled through a stone quarry. Out of the corner of my eye I could see grass, mud and milk being thrown up from the left wing.

We were still travelling at a good clip when the nose gear dropped into the next ditch and broke off. The nose plunged into the ground. We were thrown against our shoulder harnesses. The door flew open. The windshield turned white. The tail came up as the airplane plowed to a stop.

The silence was sudden. I looked around. The cabin had remained intact. I started to breathe out a sigh of relief when I was thrown hard against the instrument panel and pinned there. Buzz Billings had rammed the back of my seat forward. He reached for the doorsill and propelled himself through the small space between my seat and the doorway out onto the wing.

I pushed myself back.

"Everyone okay?" I asked.

I became aware of milk dripping on my head from the top of the door opening.

I undid my seat belt and climbed onto the slanted milk-covered wingwalk.

"You go first," Glenn and Margaret both said at the same time.

It was not a good time for discussion.

"You're next Margaret," I declared, firmly.

She slid across the cockpit and I helped her onto the wing. The airplane rested on its crumpled left wing and curled propeller. The tail and right wing were high in the air.

I jumped down off the back of the wing to make room for Glenn to climb out. I landed in four inches of sour milk. I hadn’t known that the dairy used the pasture as an evaporation field to dispose of stale product. The milk was shallow enough that it didn't show through the long grass but deep enough to flow into my shoes.

I reached for Margaret on the wingwalk.

As I said it, a putrid smell wafted up from my feet. I picked her up from the wing and then swung my left arm under her legs.

The next thing that wafted up from my feet was a swarm of mosquitoes. The milk-laden field was a breeding ground for the blood-thirsty insects. Since I was carrying Margaret, there was nothing I could do about them except move. I squished and slogged my way toward Billings who was standing on a ridge of dirt at the edge of the field. Glenn followed us. The mosquitoes swarmed into my hair and on my bare arms. Margaret did her best to wave her free hand around without losing her grip around my neck.

Billing's high ground was a line of overgrown dirt piled from a ditch dug along the edge of the field. The ditch was on the other side of the ridge. It was full of sour milk. We climbed onto the dry mound beside him. He didn't offer to help. I put Margaret down.

I knew he was referring to whose insurance coverage he thought was going to pay for this one.

"You said that the delivery is not complete until the distributor gets a ride home," I countered. "That means it's still your airplane."

The self-serving aircraft salesman was making me angry. This was not the time or place to be threatening anyone.

I blame my next action on an overload of adrenaline.

I planted my feet firmly on the mound and shoved the belligerent man in the chest sending him flying backward into the ditch of sour milk; red blazer, blue pants, white shoes and all. 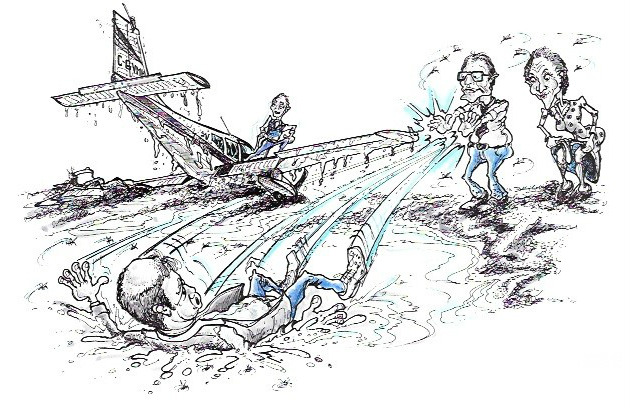