The Flying Circus: One man’s junk

Flying school customer Bruce Stanwick casually asked Henry and me what would happen to the Hallaway's wrecked Archer after the insurance settlement.

"It belongs to the insurance company now, Bruce," I said. "Normally they sell it to a salvage company. Why do you ask?"

"I'd like to buy an airplane when I finish my pilot course. It appeals to me to rebuild a wreck, especially if it saves money."

"It's not worth it, Bruce," I said. "The adjuster said it's a write-off. When the left main wheel hit the ditch, the left wing was yanked hard enough to bend the spar box in the fuselage. The wing and fuselage are scrap."

"Well maybe we can find another wreck that was hit on the right side," Bruce offered.

I was about to suggest that it was a very long shot but Henry spoke first.

"I'll talk to our mechanic, Darcy, and see what he says. In the meantime I'll tell the adjuster that you are interested."

"Thank you," Bruce replied. "If we can put a deal together, I'd like to talk to you about leasing the airplane. Could you use an Archer in your fleet?"

My immediate thought was that we needed another airplane but an Archer would be the third type in a four-plane fleet. It wasn't a good idea.

"Yes," Henry said quickly. "With all that extra radio equipment and extra performance, it would make a good advanced trainer. It would also appeal to licenced pilots as a rental airplane."

They both looked at me to see what I had to say. I was thinking how all of Henry's decisions had worked out for us.

"Yes," I said agreeably, "we need another airplane and it would be perfect for our fleet." 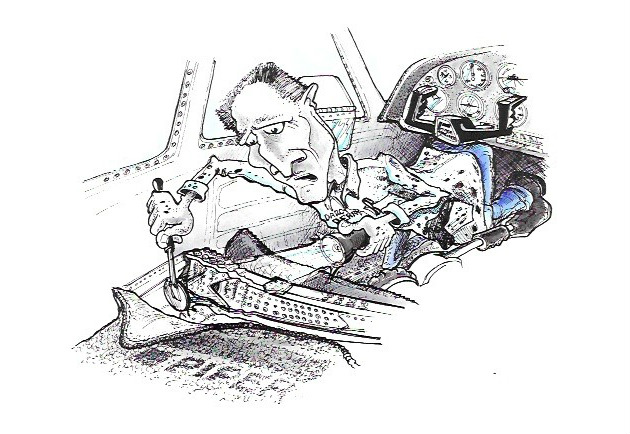 
Darcy flew in from Derry Air later that week to look at the wreck. Bruce, Henry and I were there.

"Hi Crash," he said to me. "So you found out Cherokees glide like cement mixers, eh?"

"The accident investigator said it was a maintenance problem," I replied.

"Can't trust those mechanics," he laughed. "Where's the trash?"

"It's in the hangar." Then I added, "This is Bruce Stanwick, the fellow interested in it."

He walked around the Archer and then climbed into the cabin. He pulled some tools from his pockets and was soon handing out the seats and carpet.

He invited Bruce to climb on the wing and look inside. He pointed to the carry-through spar box.

"She's toast," he declared, pointing at the bent heavy-gauge aluminum. "You could buy another fuselage and left wing but with the labour costs to transfer everything else from here to the new pieces it could add up to more than the cost of a new airplane."

Bruce had been watching and listening quietly.

"If the spar box is not cracked, can a frame shop straighten it?" he asked.

"I don't think so. First of all, the only way to get the bent left wing off is to cut it, then you're stuck with the spar stub jammed in the bent spar box."

"What if we used the wrecked left wing in place to straighten the spar box? Once it was back in line, the wing should come off and a new one could be installed."

Darcy looked at Henry and me standing in front of the wing peering over the open door. He smiled.

"There is the outside chance that it might work if the spar box has not been bent too far but you have the problem of getting the airplane to a frame shop with the left wing still attached and then there is the question of jigs. Piper has the only Archer jigs that I know of. You'd need them to get the wings both going in the same direction.

"I work for Circus Hydro," Bruce said quietly. "We get our share of twisted hydro trucks from tip-overs. There is a shop in Derry that has a computerized laser frame machine."

"I know the man works magic with that machine," Darcy said. There was a growing excitement in his voice. "A friend of mine races stock cars on weekends. Enzo does his frame work. He might be able to do it.”

“His machine can laser measure the good side of the wreck," Bruce offered. “The computer could flip the measurements and apply them to the left side. He doesn't use jigs."

"That's clever and it might work," Darcy said. He looked at Bruce. "Are you sure you're a pilot?"

"We should get Enzo down here to have a look at this," Darcy suggested.

"I did already," Bruce replied. "He was here yesterday. He said no problem."

"Well, then you only have to find a way of getting the wreck to Enzo's shop with the left wing on," Darcy said.

Henry and I looked at Bruce. He blushed. Henry answered for him.

"Trust me, Darcy," Henry said. "It's not a problem. But I wouldn't bet against hydro-induced traffic tie-ups between here and Derry on the day he does it."

Bruce spent another hour with Darcy making a list of the replacement parts that would be needed to rebuild the airplane. I went flying with a student and Henry called Russ Landsdowne, the insurance adjuster. He explained that Bruce was ready to bid on the wrecked Archer.

"So far I've got two low bids from salvage companies and a higher one from Buzz Billings," Landsdowne said.

"Billings? He doesn't do salvage."

"I suspect he’s planning to order the replacement Archer as a "green" airplane, transfer the interior and radios from the wreck and sell the rest of it to one of the salvage companies."

"That's good to know," Henry said. "You'll be receiving a bid from my man by the end of the week. Can you wait that long?"

"Sure, no problem. In fact, sometime this week I was thinking of taking some time off to go to the racetrack. I hear that horse Number 11 in the tenth is a sure thing."

Henry only hesitated for a moment.

"Well, good luck. It was nice talking to you."

Henry told Bruce to bid $11,000 if he wanted to buy the wreck from the insurance company.

He did. The next week he was the proud owner of a bent Archer.

Three familiar hydro trucks pulled into The Flying Circus a few days later. One was towing a trailer with the backhoe on it. Another trailed an empty flatbed. Eight men got out including Bruce Stanwick. Three of them unloaded the backhoe while the rest attacked the broken Archer with electric screwguns. In 30 minutes they had removed the right wing and the horizontal stabilizer from the tail. The backhoe operator picked the rest of the wreck up and placed it on its right side on old tires covering the flatbed trailer. The bent left wing pointed skyward. They lashed it all down including the good right wing. The whole operation took 40 minutes. It was beautiful to watch.

"Do your guys want coffee?" I asked Bruce when they were finishing up.

He looked at his watch.

"Are you making it?"