"I named 'er 'Petunia' after my mom," the young farmer said.

We were flying to Derry, 20 miles west, with Barry in a Cherokee 140 to take delivery of Melville's TriPacer.

“I think I've talked my dad into building a landing strip on the farm," he said.

He turned toward us each time he spoke. The control wheel turned with him.

"That must have taken a lot of persuading, Melville," I replied. "Now look ahead and try to fly a heading."

"Not really. Dad's thinking about lessons."

It was a scary thought. It had been an extended challenge but fun teaching Melville to fly. I had met his dad. The challenge would take a lot longer and be less fun. Ebert Passmore was a know-it-all farmer. I knew because he had told me.

"We'll have to introduce your dad to Barry," I said. "He'll have his Instructor's Rating soon."

Melville turned around. "You'd like teaching my dad," he said to Barry. The airplane zoomed skyward. "He knows lots about flying already."

We landed at the Derry Airport. Melville and I hopped out. Barry climbed into the left seat and headed back to Circus.

We met Darcy, Derry Air's chief mechanic, in his office. He handed Melville the keys. He had been true to his word and had completed the annual inspection on the TriPacer for under $1,000. Melville paid him cash from the roll of money in his coveralls.

"Fly carefully and call me if you have any problems," Darcy said.

It was the only time I had heard him speak to a pilot without being sarcastic. He obviously had a soft spot for the round little farmer.

Melville barely heard him. He gave a quick "Thank you," and ran out the door to the airplane.

He waved the handful of bills at me.

"Hey," he grinned, "we don't give respect around here, it's earned."

I followed Melville's path out the door. The TriPacer was parked in the middle of the ramp. Darcy's shop had scrubbed the grim off. The yellow and red strips gleamed in the sunshine. The little airplane looked like a clown in church next to the vanilla-colored Cessnas and Pipers. Melville sat grinning in the pilot seat. I let him enjoy it while I took a close look at the outside. The TriPacer was a lot more appealing without the flat tires and dirt streaks. The recover job was in good shape. The stitches in the fabric were straight and neatly taped and doped over. I opened the cowlings. The engine compartment had been sprayed clean and shiny.

Melville climbed out. "How's she look?" His beaming face dictated a positive response.

"Melville, you robbed that poor aircraft broker blind. You should be proud."

We did the walkaround together and climbed in. I thought that switching to the TriPacer would be a handful for Melville. The older high-wing airplane was different from the Cherokee 140. I was wrong. It was the perfect farmer's airplane. It was strong as a milk stool and handled like a tractor. While taxiing out to the runway it was obvious that the heavy nosewheel steering suited Melville. On the way back to Circus I had him practise steep turns, slow flight and stalls. The fat stubby wings rewarded his inputs with a suitable heavy response. By the time we had completed some circuits at the Circus Airport, Melville had overcome his excitement and was flying the airplane well. I sent him solo. He was gone a long time, no doubt buzzing his parents' farm. About the time I started to worry, he came back. He climbed out of the TriPacer grinning from ear to ear.

Later that week, we continued Melville's Night Rating Course on his airplane. The short wings caused the TriPacer to descend rapidly when the power was reduced. It was a hard airplane to land smoothly. At night, the approach felt like riding a crowbar down a well. The almost total lack of shock absorbing in the landing gear sent a jarring signal to the inaccurate pilot's backside.

Melville caught on quickly. After two night landings, he was greasing the TriPacer onto the runway between the two rows of lights stretching into the darkness. He was soon ready for the last dual lesson on the Night Rating Course, the crosscountry flight. For this, we flew around the western end of Lake Ontario, through the Toronto International Terminal Control Area to the Toronto Island Airport. The lesson provided some night navigation practice as well as radio work in a high-density traffic environment.

"When we go to Toronto," Melville asked excitedly, "will I be talking to the same controllers who speak to the airline pilots?"

"No, you talk to them just like you're an airline pilot."

I was worried about the radio work for this trip because of Melville's long pauses when talking. The dead airtime was okay at Circus where the controllers recognized Melville's voice. They'd wait through his hesitations. The rapid-fire Toronto controllers would be too busy for such special treatment.

I scripted the anticipated radio conversation for the Toronto Terminal Control Area and into the Toronto Island Airport. I wrote down everything that I thought Melville would have to say and what he should hear in response. We practised on the ground before the trip. Melville read his part and I played the air traffic controller.

On the evening of our flight we reviewed the script and filed a round-robin flight plan to Toronto Island. Melville checked his equipment: two flashlights, two pencils, a map and the script. We did the pre-flight inspection together and climbed in. Melville went through the checklist, started the engine and picked up the microphone for taxi instructions. He keyed the mic, took a deep breath, looked both ways, licked his lips, pulled in his tongue and spoke from his boots.

"Hi, Melville. I see you're on a flight plan to Toronto. Taxi for Runway 24, wind calm, altimeter 30.03. Call me on the tower frequency when you're ready to takeoff."

It was Barry in the tower. So much for proper radio procedure training.

"Okay, Barry, thanks," Melville replied. Then he looked at me. "I mean, Oscar Whiskey November, roger."

We took off from Runway 24 and headed for Derry on the way to Toronto. Barry bid us a "good flight" when Melville called clear of the Circus Control Zone. It was a calm, clear night. We cruised along the Lake Ontario shoreline. Navigation was simply a case of identifying the next grouping of lights. Melville followed our progress with his tongue hanging out and a stubby finger on the map.

Derry was where Melville had learned to fly. He called for permission to fly through the airport control zone.

"Hi Melville, it's good to hear from you. How's the new airplane?"

Melville looked at me to see what he should say.

"Tell her that the new airplane is fine."

"The new airplane is fine, Diana," Melville said. The non-standard radio talk was making him grin. "I like it," he added and then looked at me. I nodded, he released the button.

"That's great. You're cleared through the zone along the lakeshore. The altimeter is 30.04. Call me when you're leaving the area."

The end of Lake Ontario was outlined by the lights of Derry. We turned right and headed for Toronto. Melville called clear of the Derry Control Zone and then tuned in the frequency for the Toronto tape-recorded terminal information service. He copied down the numbers on his kneeboard. Then he changed the frequency to Toronto Terminal Control. It was busy.

The controller was working both IFR and VFR air traffic around Toronto. We couldn't hear the airline replies. They were speaking to him on a different frequency.

"American 800 over to the tower now, one eighteen four.

"Hotel Delta Alpha, one more turn for the localizer, keep your speed up, there's a 747 behind you."

The radio work was rapid and continuous. I looked at Melville. His eyes were wide.

"You just have to jump in when he's not talking, Melville." I said. "He can listen to two conversations at once. You just have to say exactly what we practised. Start by making initial contact."

He stared at his kneeboard, keyed the microphone, took a deep breath, licked his lips, pulled in his tongue, looked both ways and spoke, "Toronto Terminal, this is Lima Oscar Whiskey November?" He said it as a question. He looked at me, I nodded and he released the mic button.

Melville gave me a blank stare. The tongue was at full hang.

"Is that Oscar Whiskey November on one nineteen four?"

Melville looked at me and did nothing.

Mic on, breath in, lick lips, tongue in, look and, "Affirmative."

"Hotel Delta Alpha, right turn to 200 degrees to intercept the localizer for 24 Right, you're cleared for the approach.

"That must be Melville in Oscar Whiskey November," the controller said. "Good evening. Squawk ident."

Melville was paralyzed. I pushed the identification button on the transponder.

"Air Canada 1214 heavy, radar contact. You're number two to 24 Right behind a Merlin intercepting the localizer."

"Radar contact Oscar Whiskey November. Circus said you're going to the Island. It looks like a nice night for it. Stay along the lakeshore, not above 2,000 and call me when you reach Humber Bay. Do you know where that is?"

Melville looked down at the now unnecessary script on his kneeboard and then at me.

That was it. Barry must have called the Terminal controller from Circus and filled him in about the slow talking farmer in the TriPacer. The call by Humber Bay would be to switch over to the Toronto Island Control Tower. There was nothing else to do but fly along, listen to the steady stream of radio chatter and enjoy the solid carpet of lights below that was Metropolitan Toronto.

Melville continued to hold the microphone in front of his face ready to transmit again.

"That's it for now, Melville," I said. "Fly the airplane and don't get lost."

Melville followed our progress along the map. When we were approaching Humber Bay, the Terminal controller called us.

"Oscar Whiskey November, I see you're coming up to the Humber. Call Island Tower now, one one eight decimal two. I'll talk to you on your way back."

I pointed to the reply on the radio script. Melville keyed the microphone. "Oscar Whiskey November." 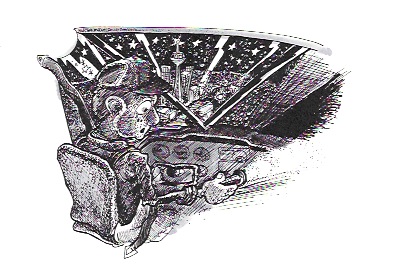 As soon as he spoke, the lights in the cockpit went out. We stared at each other in the dark.

He dug in the map pocket on his side of the airplane. I took the microphone from him. I punched the transmit button and released. There was no click sound on the radio. We couldn't hear the controller's voice talking to us or to anyone else. The engine continued to buzz along. We had lost our electrical system.

Melville turned on his flashlight.

"Shine it on the engine instruments," I said.

He did. The alternator output gauge read zero. So did the fuel quantity gauges in the same instrument cluster.

"We're out of gas!" Melville exclaimed. There was more doubt than panic in his voice.