Barry McDay walked into The Flying Circus office and introduced himself. I recognized his voice. He was an air traffic controller from the local tower. Barry appeared to be young, lean and bright. He stood erect and the intensity in his eyes indicated that his lights were on and someone was home.

I was working in the office with my flying school partner, Henry.

"I have a Commercial Pilot Licence,” Barry announced. “I'd like to get a Flight Instructor Rating and teach part time."

I immediately thought that our fledgling operation needed customers, not staff.

"Good," Henry replied, "Both of us are qualified to teach instructors."

"If I took my training here," Barry asked, "would you guarantee me a part-time teaching job?”

"Yes," Henry answered quickly. "In fact, I'll hire you right now, if you'll agree to certain terms. Would you like a coffee?"

I wanted to take Henry out behind the hangar and talk sense into him. The few customers that we had were not enough to pay all the bills let alone put food on the table. If we started hiring staff and acting like managers, we'd be broke faster than we were going broke now. I didn't say anything immediately. I had learned in the last week that Henry and I did not think the same. He was smarter.

"Second, you start working this weekend when you’re not in the control tower. We have some sightseeing flights and introductory flying lessons booked over Saturday and Sunday. You can do those with your Commercial Pilot Licence. We won't pay you for them but we'll credit you with free flying time on the airplanes. Those flights also count on your instructor's course, which will save you money."

"I'm working afternoons this weekend," Barry said. "I won't be able to fly after two thirty."

"That's okay. We'll do the later flights. Thirdly, while you're on the instructor course, you'll teach ground school in the evenings that you're available and continue to do introductory flying lessons and sightseeing flights for credit. You'll be expected to develop your own student customers by the time you graduate. We'll supply you with brochures and the occasional low-budget newspaper advertisement."

"When you're on course," Henry continued, "you might be bumped off a lesson or two in favour of a paying customer. If this or anything else becomes a problem, you speak to either my partner or me. If you're a problem for us, we'll speak to you."

"Finally, all of the above is dependent on my partner flying with you right now. He’ll show you how we conduct introductory flying lessons. If he doesn't like how you fly, the deal is off. I'll need to see your Commercial Pilot Licence and medical certificate. I'd also like two work references other than the control tower supervisor or your mother. Any questions?"

"Just one," Barry said looking into his cup. "Who makes the coffee around here?"

"When you're working here, you do," Henry said, holding out his right hand, "Do we have a deal?" 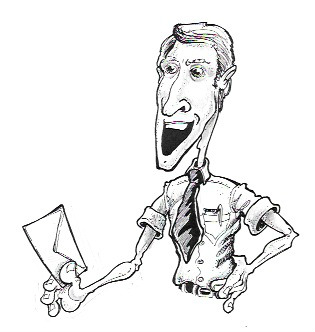 "Yes sir, I mean Henry," Barry said. He handed Henry an envelope that he dug from his pocket. "The references are in here."

He turned to me and shook my hand. "I appreciate the opportunity to show what I can do," he said. "I'll just go out to my car and fetch my sunglasses and checklist. I'll be right back."

As soon as he had cleared the door, Henry turned immediately to me. He had a worried look on his face.

"Did I go too far? Is everything I said okay with you? We can still cancel the agreement. We don't have anything in writing."

"No," I said, "I think you covered everything quite well. We'll give him a try. If he's as sharp as he looks, we should be all right. There is just one thing that bothers me."

"What's that?" he asked quickly.

"It's scary how much you sounded like our former boss, Stingy Mingy."