The Flying Circus: Henry and Splash

The flying school open house was a hit. The public saw the headlines and responded to our newspaper invitation. They came in droves to gawk at the airplane I had wrecked. By ten o'clock, our parking lot was full. By eleven, cars lined both sides of the airport entrance road.

Henry and I manned the hangar. I stood by the bent Piper Archer and talked to a steady stream of curious people. Then I passed them to Henry. He sat them in the shined-up Cherokee that we had parked beside the wreck. We didn't let them get away without taking handout sheets on sightseeing flights and flying lessons.

The weather was sunny and warm so Leanne closed the office and set up a table and chair in the entrance to the hangar. She sold airplane rides and introductory flying lessons. Business was brisk. Barry McDay and Ray Tragunno were busy flying all day. Al Milton cooked steaks with help from Summer McDay. They set up an empty coffee can with a hand-lettered sign on it.

Al had brought a hundred steaks. I told him it was too many.

Dave Michelin brought a party box of donuts, mostly cream filled. Leanne set him up beside her with the coffee maker. His coffee can sign read, "Coffee and donut - $2 - pet the dog - 25 cents - jokes - free - proceeds to charity".

"When you land a wheelplane in a milk pond, do you log that it as a seaplane flight or a breakfast flight?" he asked me and then roared.

"Tell me," I heard him ask one little boy who was petting his bloodhound Whiskey, "are people who eat Corn Flakes for breakfast called cereal killers?”

The kid ran away.

"Do you call people who stop smoking 'quitters'?" he asked one couple who paid for a joke.

"Can I have my money back?" the man asked.

"No, but I'll give you two for one if you can tell me why the turtle crossed the road."

Bruce Stanwick came with several of his hydro workers and their families. I thanked them again for saving us from a day of laying in bug-infested sour milk to take the wings off the wreck. I told Al and Summer that The Flying Circus would pay for steaks for the hydro crew. Al told me afterward that Bruce had tossed a fifty-dollar bill in the donation can.

Al laughed it off.

The busy day helped me a lot. I was still bothered by the crash. It was nice to know that the engine quit due to a mechanical failure but I mentally replayed the short flight trying to think how I might have handled it differently. Working with the public all day took my mind off it. 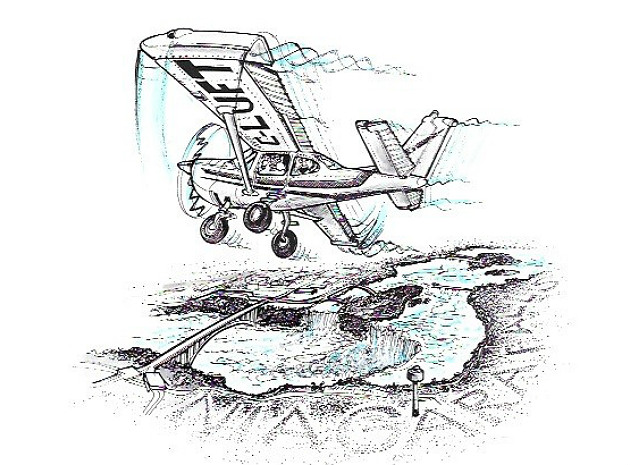 
During the afternoon, Summer introduced Henry and I to three friends from her church choir. They were the most unlikely looking learn-to-fly candidates but I thought it was nice that they had dropped by for the barbecue. They were the long, the short and the small. Reimie was a gangly six-footer. She was shy but her size and booming voice made it impossible for her to go unnoticed. Hilda was older, rounder and a lot shorter. Kate was a thin and quiet librarian type.

"It was nice of you to drop by," I said, shaking their hands as they were introduced to Henry and me.

"I'll arrange for Summer's brother Barry to take the three of you on an introductory flying lesson," Henry said. "He's flying the Cessna 172. You could go together."

The three girls were wallflowers. I knew Henry was wasting his breath.

They exchanged shy glances. Kate blushed deeply. Hilda spoke up. "We'd like that," she said.

You could have knocked me over with a feather.

"Good," Henry replied. "Come on over and meet my wife, Leanne. She'll fit you into the schedule."

And so it went. At the end of the day, Barry and Ray had flown 30 introductory lessons and sightseeing flights. Leanne booked several more for the next few days. Ten people had signed up for flying lessons, including Summer's three church-going wallflower friends. Al was out of steaks and Dave had eaten or sold all the donuts but was still telling jokes.

"Have you met Henry and Splash? They own The Flying Circus."