My partner's wife Leanne anchored the office at The Flying Circus from nine o'clock until four, Monday to Friday. Her schedule minimized the impact on her two young children, Victor and Gretchen. We were lucky to have her but our new flying school needed someone to take phone calls when there was nobody in the office.

The airport manager recommended Myrtle Knickenbacher, his sister-in-law. Myrtle was the owner and sole employee of Eavesdroppers Answering Service. Over the phone, she sounded like a perky 30-year-old.

Henry and I went to her house to meet her. We were greeted by a tall, thin 50-year-old in pink slippers and a purple housecoat. Her hair was out of control and she had the odd habit of spitting drool when she talked. The house wasn't exactly dirty but there were piles of magazines and newspapers everywhere. On top of the piles were telephones, one for each of her customers. A few rang during our visit. She waited four to six rings before answering them.

"The number of rings is up to the customer," she explained.

The sweet voice didn't fit the body but she seemed efficient. She asked questions about what we did and when we worked. She explained, while showering us with bits of drool, that she had three objectives when answering our line: be helpful, make the caller think she is at the airport and never lie. We weren't sure what she meant but we signed the contract and left to escape the spittle.

Al Milton, Henry's laugh-a-minute student, called one day to change a booking after we were hooked up with Myrtle. Leanne had gone home and Henry and I were flying with students. 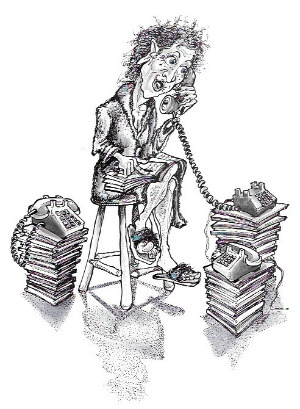 Al was surprised by the strange voice.

"It's Myrtle Knickenbacher. How can I help you today?"

"You must be new," Milton replied. "Ah, is Leanne there?"

"No, I'm afraid she has left for the day. I can have her call you tomorrow."

"No, I believe he's still up flying. May I have him call you as soon as he comes in?"

"I need to reschedule my booking tomorrow," Al said.

"I'll let Henry know that you're canceling for tomorrow," Myrtle replied. "Do you have another time in mind?"

"Is he available Friday at two o'clock?"

"As far as I know he is, but I'll have him confirm it with you. What is your name and phone number?"

Al gave her the information and then asked, "Is this an answering service?"

"I work at reception, answering calls, making bookings and helping the customers however I can. Is there anything else I can do for you Mr. Milton?"

"No, thank you," he said. He liked the voice. "Maybe we'll meet the next time I'm at the airport."

We backed up Myrtle at her game. I was the next one to pick up our messages that day. I returned Al's call to confirm his booking.

"Who's the new babe working the desk?" he asked.

"Yah, Myrtle Knickenbacher, why do you ask?"

"She sounded too good for you guys. How do you con these women into working for you?"

"Like flies," I replied with a laugh. "Beautiful women hang around this office and beg Henry and me for a job just to be near us."

"Right. In your wildest dreams," he chuckled. "When I see her, I'll tell her that she's working for a couple of losers."

"You're just jealous. You're confirmed for two o'clock on Friday. I'll give Myrtle your love."

Al came in for his next lesson looking for Myrtle. Leanne was working the desk.

"When does this Myrtle girl work?" Al asked casually.

"She helps out when I'm not here," Leanne replied.

"Where did you find her?"

"She's related to the airport manager."

"Her hours are hit and miss. Did you want me to give her a message?"

On Friday that week, Barry McDay's sister, Summer, took her introductory flying lesson with Ray Tragunno, a lecherous airline pilot who was instructing for us part time. When they returned, Leanne had gone home for the day.

"Damn, there's nobody here," Ray cursed. "I don't see how these guys expect to make any money if they don't have the staff to collect it."

"The invoice is right here," Summer said, looking at the flight desk, "and I have money on an account. My brother is paying for my first lesson."

"That's good," Ray replied, "but we need someone to book our next flight. I'm available on Sunday and Monday."

She leaped to the other side of the flight desk. "I'll have a look."

Summer figured out the reservation sheets and booked a lesson for herself with Ray on Monday. Then she entered the flying time on the invoice and the daily log using the previous entries as a pattern.

Al Milton walked in from a flight with Henry who was still outside turning their airplane around. Summer looked up with her bright blue eyes and flashed him a friendly smile. "Hi," she said cheerfully.

"You must be Myrtle," Al replied, closing the door.

She didn't know who he was talking about but it didn't slow the perky university student down.

"And you must be the Flim Flam man," Summer replied.

He leaned over the counter and offered a handshake.

Summer stood up and gave his hand her full athletic squeeze.

"Pleased to meet you," she replied.

"Likewise," Al winced. He looked at his compressed fingers.

"I don't understand how this guy gets pretty girls like you to work for him," Al said with a laugh.

"I'm in his custody," Summer replied mischievously. "He signs me out on a work pass from the Women's Correctional Facility."

Al didn't expect such a bold-faced reply from this innocent-looking girl. For the first time at The Flying Circus, he was lost for words.

"Mrs. Rains has started your bill," Summer said to Henry. "I'll fill it in for you if you tell me how long you were."

"One point four hours," Henry said without jumping into the rest of the conversation.

Summer turned to Al. "I see you're charging to your account, Mr. Milton. Would you like to make another booking?"

"Al, call me Al," he said. He was still struggling for words. "What are you serving time for?"

"Embezzling," Summer replied without hesitation, "but it won't happen again. I'm studying accounting so I won't get caught next time. Can I put you down for another lesson?"

Al had met his match.