The voice at on the other end of the line belonged to Darcy Philips. Darcy was the chief mechanic at the aircraft maintenance base in the nearby city of Derry.

I had arranged for Darcy's shop to check over Dave Michelin's Lake amphibian to see why it was so down on power. Darcy had come to Circus and had managed to fly it back to Derry.

Darcy never wasted a full sentence on pilots. He regarded us as idiots. It was a logical conclusion drawn by a man who spent all day fixing airplanes broken by pilots.

"Is the engine bad?"

"But the communication radio worked when I flew it."

"Not any more and there's nobody old enough to fix it."

"How about the hydraulics, fuel system, electrics and the airframe?"

"Can we go a little slower so I can explain this to the customer?"

"Your customer's an idiot."

"What's wrong with the engine?"

"All out of limits except the clock."

"The hydraulics and fuel systems are leaking into the hull. It's a race to see if the fluid corrodes the bottom out of the airplane before the half-baked electric system sets fire to the whole thing.”

"Fix is a function of wallet. How fat is your whale lover?"

"That's more than it's worth!"

I phoned Dave Michelin and suggested that he stop by the office to discuss the repair quote on his airplane. He was eating jelly donuts on the couch and tossing one-liners across the office to Leanne when I came in from my next flight. Whiskey, his bloodhound, was flopped on the floor.

"Did you ever wonder why the Psychic Hotline asks your name?" Dave said to Leanne.

I finished with my student and pulled a chair up beside Dave. The couch was already full. He waved a donut at me.

"Help yourself," he said with a hearty laugh. There was a ring of icing sugar around his mouth. "They're recommended by four out of five dentists."

"Go for it," he said without hesitation.

It took a moment for what he said to sink in.

"Before you make any hasty decisions, let me find out the scrap value of the airplane," I suggested. "You'd get some of your money back."

"If I sell it for scrap, then I lose money and I don't have an airplane. Tell your man to do the repairs and then I want new windows, paint and interior. I'll go to $75,000. That way I'll salvage my investment and have the airplane that I want." 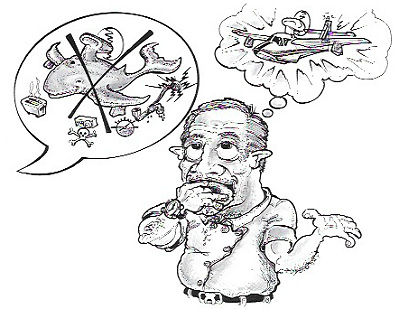 I didn't follow his logic but I didn't know how else to reason with him.

"It'll take a couple of months," I said.

"It's only spring. I'll fly your Cherokees in the meantime. When can I get checked out?"

"Right now," Leanne offered. She had been listening to the conversation.

"Okay," Dave said, heaving himself up from the couch. "I'll hit the washroom and we'll go."

Dave headed for the bathroom in the corner of the office. Whiskey went with him.

"He isn't making sense," I said to Leanne when he had closed the door.

"It makes sense to me," she replied. "It's shopping logic. If you don't buy something then the money that you would have saved on the purchase is lost and you have no merchandise to show for it. In Dave's case, he has to spend more money to save losing the money that he already spent. I understand his logic perfectly but I still don't know why the Psychic Hotline asks for your name."

Dave came out of the washroom. I could hear Whiskey drinking out of the bowl.

"If the seat cushion on an airliner is your personal floatation device in the event of a ditching, is the bag of peanuts your life raft?"

The three of us went flying in a Cherokee. The airplane was smaller with Dave and Whiskey in it. The dog filled both jump seats in the back. We used extra runway to takeoff. Once we were airborne, the climb rate was lower than normal. The engine seemed to be developing full power and Dave was holding the best rate of climb speed. I chalked it up to the warm temperatures that day.

Dave displayed the same natural touch with the Cherokee that he had on our short flight in the Lake but the airplane wouldn't hold altitude during turns at 2300 rpm.

The extra power helped but the performance was still sluggish. In straight flight, the Cherokee flew left wing low. I was gaining a better appreciation of why the Lake Amphibian struggled to fly.

"How much do you weigh, Dave?"

He looked at me sideways. "Why do you ask?"

"Because you either weigh more than you look or there's something wrong with this airplane."

"Two thirty-five, two thirty-six," he replied. "Maybe the landing gear won't retract," he added, stabbing at an imaginary lever on the dashboard.

"The landing gear's bolted down," I replied. "Is that 236 pounds or kilograms?"