"How much weight have you lost?"

I was talking to Dave Michelin on The Flying Circus ramp. It was time to teach him how to takeoff and land his Lake amphibian on water. We had planned to fly north to Dave's cottage for the lesson.

"I don't know," he answered with a chuckle. "I'm waiting for the end of the month to surprise myself."

"You've got jelly donut powder on your face," I said. It was true.

"Thank you," the heavy-weight dentist replied, running his hand around his grin. "That's the best part." He licked his fingers.

Dave's insurance company required him to take ten hours of dual instruction on water flying before acting as pilot-in-command to his cottage. I had called his insurance agent to clarify what we should cover during the lessons.

"What exactly do you mean by 'water flying'?" I had asked.

"It's flights that take off and land on water," the agent replied.

"So if Dave and I fly from the Circus Airport to his cottage and back, it doesn't count as 'water flying' because we used the airport?"

"Will the flights take off and land on water?" he asked.

The guy sounded like he was reading from a manual. I tried a different approach.

"If we take off from water, fly for 10 hours and then land on water, does that meet your 'water flying' requirement?"

"Will the flights take off and land on water?"

He either knew nothing about flying or was being dumb as a fox and not committing to anything. I tried once more.

"If we taxi around on water for 10 hours and during that time, become airborne momentarily, does that meet your requirement?"

"If the flights take off and land on water."

"You're welcome," he had replied cheerfully. "Call anytime."

My biggest concern with the water work was weight. I already knew that the Lake was overloaded carrying me, Dave and his ever-present, donut-sucking dog Whiskey. Takeoffs on land were exciting enough. On water I was worried the airplane would either not float or, at best, become a permanent boat.

Dave was carrying a duffel when we met on the ramp.

"We can't take it," I said firmly. I had already spent part of the morning removing the rear seat from the airplane to reduce the weight but I had added paddles, an anchor and rope.

"And can we leave the hound here for this one?" I asked hopefully.

"No, but if we can't take off from the lake, you can leave us there and fly home yourself," he said, "if we can take the lunch."

"How would you get home?"

"My wife will be driving up on the weekend."

"Sandwich?" he offered, holding out a foot-long meatball sub. He was grinning. "If we eat a couple now, the bag will weigh less."

Dave threw the bag in the back of the Lake. He and Whiskey waddled toward the office while I fueled his airplane. We had already calculated that the cottage was an hour and a half away. We would be gone about four hours. I filled the tanks so we would have enough gas for the round trip and some practising in between. Then I joined Dave in the office. He was dropping one-liners on Leanne.

"Ever wonder how seedless grapes reproduce?"

"Okay Ace," I said, "here's the plan. Your genius insurance agent will only count hours between takeoffs and landings on water as seaplane flying."

"Well, the summer isn't long enough for you to accumulate 10 hours, 30 minutes at a time so we're going to perform Circus's first waterdrome departure."

"The only water here is Lake Ontario and you said it was too rough most of the time."

"It's too rough today but the Circus Airport Waterdrome is calm."

"I don't know what you're talking about."

I signed us out and told Leanne that we'd be back by two o'clock.

Dave hoisted Whiskey into the back of the Lake. He curled up with his head on the duffel. Dave started the engine and turned on the radio to call for taxi instructions.

"Ask for one circuit before a northbound departure on a VFR crosscountry," I said.

Barry was working in the tower. He gave us Runway 24.

The takeoff run used the usual 4,000 feet. I selected the landing gear up as we approached the perimeter fence. The tree line was next.

"Turn left for the corner of the field," I yelled through the intercom.

The overloaded Lake's vertical speed was a few inches per minute.

"Do you want a touch and go?" Dave asked.

"Splash and go," I replied. "See the pond beside Runway 24?" I asked, pointing out Dave's side window as we turned downwind.

"I'd call it a bird bath," Dave replied squinting at the man-made pond.

"Well it's 800 feet long and two hundred feet wide," I shouted, "and we're going to do a touch and go on the hull with the wheels up."

"I thought I was crazy," he said, shaking his head. He looked at the pond again and then at me.

"You have control," he said lifting his hands and feet. "I'm not doing it."

I flew the airplane and called the tower.

"Delta Uniform Delta downwind for a touch and go in the pond next to Runway 24."

"You're crazy," Barry replied from the control tower.

"It's an insurance requirement," I answered calmly.

"Any manoeuvring other than on the active runway is at your discretion Uniform Delta. You're cleared for a low and over parallel to Runway 24, wind 230 at 15." 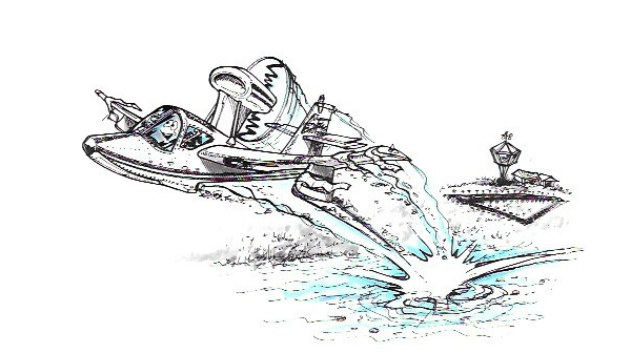 
I planned to carry extra speed and just touch the hull on the surface for a second. I figured that at 100 mph I had about five seconds to clear the manmade bank surrounding the pond, dip the hull and clear the bank on the other side. I left the gear and the flaps up and kept the power on.

As we approached on final, the Lake was accelerating. The pond was looking smaller. It was coming up fast. I almost chickened out but I decided that we had nothing to lose. If I missed the surface, we could find water somewhere along the way.

We crossed the nearside levee, I applied full power and pushed forward on the control wheel. The Lake obliged a little better than I had anticipated. Instead of kissing the surface, the hull whacked the pond. Brown water splashed up from both sides. The airplane slowed considerably. I pulled back. The nose came up and the Lake hauled itself out of the pond.

"Right turn out for a departure northwest approved, Uniform Delta," Barry said. "Looks like you're trailing a little debris," he added.

Dave and I looked at each other and then out our side windows. The wings next to the hull had turned beige. There were paper streamers stuck to the leading edges. It was toilet paper.

The airport "pond" was a sewage lagoon.