The Flying Circus: After the crash

The Hathaways and I staggered along the uneven, grass-covered ridge as fast as we could, vainly swatting at the swarms of mosquitoes. We came to a farm track that bridged a ditch and crossed a hay field toward the county road.

I turned and looked back. What had been a shiny new Piper Archer climbing out from the Circus Airport just minutes before was now a wrecked airplane sitting cockeyed in the middle of the field of sour milk.

I had been departing on a flight with Glenn Hathaway, his wife Margaret and Piper Distributor Buzz Billings in the Hathaways’ new airplane. We were taking Buzz back to his home airport. The engine had stopped dead in the climb 300 feet up. I had taken control from Margaret and landed their new purchase in what I had thought was a pasture beside the Dairydale Dairy. It turned out to be a ditch-filled evaporation field for sour milk. Our landing had left a trail of flattened grass and broken irrigation pipes.

"Don't worry about it," Glenn Hathaway said, reading my mind. "We walked away."

"Thanks, but I feel badly about trashing your new airplane."

Buzz Billings brushed passed us on the run.

"You'll hear from my lawyer," he sputtered through a cloud of bugs.

We followed him along the dirt path. We could hear the sirens in the distance. The air traffic controller had watched us go down and had called the local fire, ambulance and police numbers. Multiple vehicles were dispatched, no doubt with thoughts of a large airplane disaster.

The emergency convoy, sirens blaring and lights flashing, started arriving as we came to the county road. The fire chief was the first to reach us. He couldn't see the airplane behind a line of trees.

"Along this dirt road, through those trees and in the middle of the next field."

"Are these all of the survivors so far?" he demanded.

"These are all of the people involved," I said.

"Okay," he bellowed, pointing at me, "you come and show us."

"The survivors are mine!" a paramedic yelled, jumping out of an ambulance. "You folks come with me," he said motioning us toward his van.

"Hey chief," a policeman shouted over the din of still more arriving sirens, "my captain wants to know if you want to call out the army reserve?"

Without saying anything further to me, he climbed into the nearest fire truck and led a charge of fire vehicles, police cars and ambulances along the farm road.

"Who has the worst injuries?" the paramedic demanded of our group.

"None of us is injured," I answered.

Vehicles continued to arrive, clogging the country road. The paramedic asked Glenn and Buzz if they were okay. Then he wasn't sure what to do next.

"It was a small plane," I explained. "There are only four of us. We're okay. Thanks for coming."

A newspaper reporter shoved a tape recorder microphone under my nose.

"It was a small plane and only four survivors?" he asked.

"It was a small plane and there were only four of us," I said clearly. "We're all okay."

"No casualties?" He sounded disappointed.

"Well, I lost a lot of blood to the mosquitoes," I offered.

"Everybody okay?" he asked.

The reporter was heading down the dirt track. The paramedic was explaining what little he knew to his coworkers. The five of us walked past the blockade of emergency vehicles to Henry's Ford Pinto parked down the road.

"There isn't room for all of us," I said. "I'll stay and see what I can do here until you come back."

I walked through the knot of cars and trucks toward the field until I was stopped by a policeman.

"I'm sorry sir, this area is sealed off. You'll have to stay on the other side of the road."

My adrenaline rush from the crash was wearing off. I thought I should be doing something but I felt suddenly tired.

"Sure thing, officer," I replied.

I joined the line of onlookers who had parked their cars on the far shoulder. The wrecked airplane was behind the trees so they could only stare curiously at the melee of emergency vehicles.

The one-lane farm track was a bottleneck of flashing lights. New emergency vehicles arrived, turned down the dirt road and blocked the departure of the ones in the field. I stood quietly for half an hour while the police officers sorted it out. Most of the onlookers had left by the time the bulk of the emergency vehicles departed. 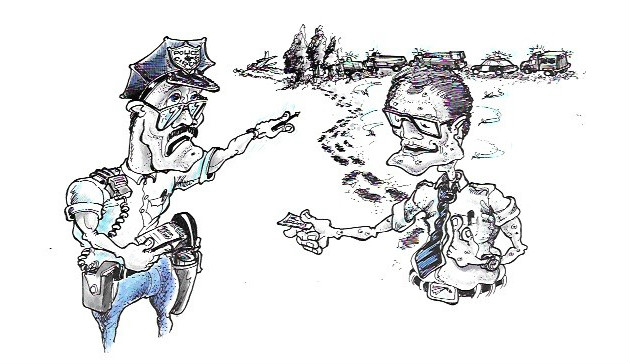 
There were a few policemen remaining at the end of the farm road, I walked up to one of them and introduced myself as the pilot of the subject aircraft.

"We've been looking all over for you," he declared.

"Well, it took me a while to get clear of the paramedics," I lied. "I assume you'd like a name of someone responsible for the wreck."

"Certainly. So you're the owner?" the cop asked, flipping open his notebook.

"No, I'm just the pilot. The airplane is owned by Buzz Billings Distributors. I work for The Flying Circus here at the Circus Airport."

"You're a member of a flying circus?"

"Yes, I am," I said without explaining that it wasn't a circus to be a member of.

"And you were the pilot of the airplane that crashed?"

"What company do you work for?"

"The Flying Circus," I replied.

"Yes, I got that," the policeman said, "but what company do you work for?"

I handed him my business card.

Henry pulled up in his Pinto. He nodded a greeting to the policeman and spoke to me.

"I arranged for Barry to fly Buzz back home. I talked to the government accident investigator. He's not coming until the morning. He will be instructing the police to post a guard on the airplane until then. If this officer is done with you, we might as well go back to the flying school."

The policeman said he was done. Henry and I got in his car and he drove to the office. "I feel badly about the Hathaways," I said on the way. "That airplane meant a lot to them."

Henry pulled a small roll of one hundred-dollar bills from his pocket and placed it on the seat between us.

"Not as much as their lives," he said. "Glenn gave me $500 before they headed home. He said it was an extra 'thanks' for how you handled the emergency. I told him it was your job but he insisted."

"He didn't have to do that." I felt embarrassed.

"No, he didn't but it's funny how people appreciate it when you save their lives."

"Well, I still feel badly. Everyone put a lot into organizing the open house for Saturday. That Archer was going to be the star attraction. Now we'll have to cancel it."

"I don't think so," Henry said. "In fact, this little incident will put The Flying Circus on the map for a lot of local people. I asked Leanne to place a display ad in tomorrow's newspaper inviting the public to view the wreck during the open house."

"People who see the news coverage of the crash, will be curious. I'm expecting a large crowd."

I thought Henry had lost his mind.

"Airplane crashes are bad news," I said. "Why display a wreck for the public?"

"People associate airplane crashes with death and destruction. This is an opportunity to show them that a landing in a field is routine."

I couldn't see how inviting the public to view a wreck was going to encourage them to fly but at that point, I couldn't argue. I was too tired.

Henry knew what I was thinking.