The destruction of Main Street: Why trains still matter to communities 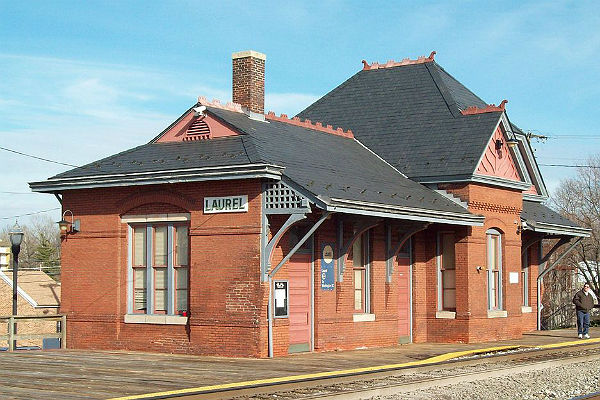 In Laurel, Maryland, a MARC commuter train — the driving force for growing and maintaining the community for close to 200 years — is under attack by a developer who wants to move the train stop to a more preferable location.

And although this sounds like the plot of an old Western, the effects of removing such an important rail line on its surrounding community would be devastating.

In 1835, when the B&O Railroad was building its first line connecting Washington, D.C., to Baltimore, Laurel was one of the stops. The rail line was responsible for carrying both freight and commuters to and from the Laurel area, specifically to the town's Main Street rail stop.

The Snowdens realized factories would soon become the economic lifeblood of Laurel and decided to build a cotton mill on the west end of Main Street, opposite the train stop, which was located on the east side. The two integral end points were separated by something close to a mile, and are from whence the city of Laurel grew.

To be specific, the Laurel train stop is 180 years old, and when Laurel was young, the mill town thrived for two reasons:

Currently, the station has been recognized as a historical site and is the last Francis Baldwin built station still operating as a rail station.

During the Civil War, it was the only rail line between Washington and the Northeast — so much so that it became a major point of contention during the North and South's conflict. From 1861 to 1865, the Union army set up a major encampment protecting the rail line from Confederate forces attempting to break Union supply lines.

On Laurel's Main Street, there are no major chains, just locally owned businesses that operate in decades-old buildings. There are cleaners, shoe repair stores, home appliance stores and hair dressers. This is Americana at its finest.

For years, this Main Street had operated with the help of the MARC commuter train stop that moved residents with ease from their Laurel homes to their jobs in either Baltimore or Washington, D.C.

Recently, there have been rumblings among local government officials and Maryland Department of Transportation (MDOT) officials that the line may be moved further north up the track by about 2,500 feet. The stop would be moved into neighboring Howard County to accommodate a potential development adjacent to Laurel Race Track.

Seeing that moving the commuter stop from the neighborhood could be devastating to Main Street, there has been an obvious backlash from Laurel residents, culminating in the Save Our Stop movement.

Karen Lubieniecki, who is heading the Save Our Stop initiative, is also a member of the Laurel Historical Society board of directors and executive committee.

Lubieniecki notes the Laurel train station that services the stop is adjacent to vacant property that transportation officials have been promising to develop for years. Moving the stop, without developing this land would be like "taking the taxpayer money and putting it in the hands of the developers."

Being a commuter town, Laurel's commerce has always revolved around the fact that the town was and is midway between Baltimore and Washington, D.C.

In fact, there are a lot of new residential areas appearing in Laurel — such as the C Street Flats and the Hawthorne Place — that are predicated on the idea that they are within walking distance and a short hop of the MARC train line.

Removing the train stop will effectively destroy the growing community. As most if not all of the small business owners in Laurel can attest, "If you get off a train station and there's a cleaners there, you're not going to walk ... down the road to get to another cleaners," Lubieniecki said.

On June 24, many of the aforementioned businesses owners along with politicians and residents, gathered at the rail station to protest MDOT possibly closing and moving the stop.

In a Baltimore Sun article, Laurel City Council President Ed Ricks said, "Our railroad station is 184 years old. ... She has stood the test of time. She has been here for us when we've needed something, when we've had serious accidents, fires or whatever. She's always been there, and we want to make sure she's here for you all forever."

Laurel Historical Society Executive Director Lindsey Baker, who was also present at the rally, told MultiBriefs that many Laurel residents and small business owners have been shoved with their backs to the wall, defending not only their history, but their very way of life.

Relocating the train stop may help the developer's bottom line, but would economically damage current Laurel businesses. It would also reduce interest in creating new businesses on Main Street, she said.

Ricks also noted that negotiation with MDOT was also a possibility, but he would not budge in his stance about keeping the station where it is.

"We would be foolish to not have room for compromise," Ricks said. "But what we want them to do is call us to the table and share with us the information. We have not had that information. ... We're willing to work with them, but the train station is staying there. I'm going to fight and make sure that things happen."

For those who wish to participate in the protest, they can contact both Maryland Department of Transportation Secretary Pete Rahn and Deputy Secretary Dennis Schrader and express their opposition to the train stop move. Individuals can also contact Gov. Larry Hogan.

Ultimately, as Lubieniecki noted, there's a great irony to the story of the Laurel train stop and Main Street. Recently, within politics, there's been a trend in rhetoric to tout the importance of small businesses in America.

"If you want to support small businesses, that's what's on Main Street," she said.

It appears Main Street USA isn't as sacred as it should be.