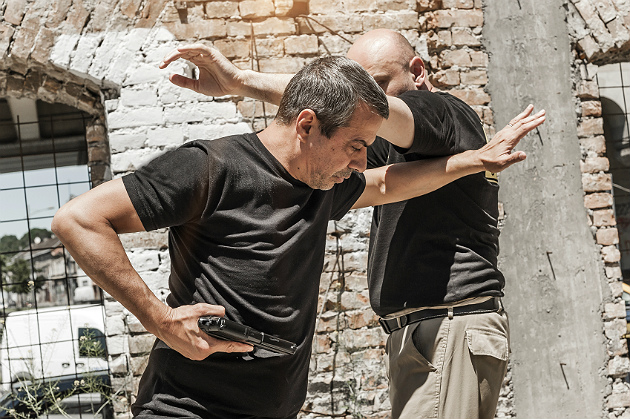 One of the "sexiest" topics in shooting in the last few years is retention shooting. There are a few different definitions for retention shooting, but basically it's holding your gun close to your body while engaging an attacker within arm's reach in a way that he can't take your gun.

There are a few scenarios where this is a factor.

There are times when retention shooting makes sense, and times when it doesn't.

Let's start off with the most popular way I've seen it taught, which is to go straight to your holstered gun if a threat presents itself within arm's reach. To be clear, instructors I respect and schools I respect teach this way.

I'm glad they teach the technique, but sometimes life experiences change your perspective. Drills, tactics and techniques that make sense against paper or a compliant training partner sometimes don't work quite so well against a determined attacker.

It's my hope that instructors and shooters will tweak the way they teach, train and practice after reading this.

The typical way this technique is taught is to have the shooter touching a paper target 2-3 feet away, blocking or striking with their left hand, and drawing and engaging with their right — often times with the butt of the gun against their ribs so the slide doesn't hit their clothing and cause a malfunction (see image above).

But if you're in a situation where your gun is holstered and a threat presents itself within arm's reach, what's your goal? Is it to use your gun to stop the threat, or to stop the threat as quickly as possible while taking a minimal amount of damage?

If you don't realize someone is a threat until he's within arm's reach, do you think you'd be surprised? I do. And that might affect the speed at which you can respond.

Former Army Ranger Sniper Nick (Reaper) Irving recently wrote an article about reaction times in relation to the Orlando shooting. He said trained individuals on patrol expecting violence have a reaction time of .39-.58 seconds. But having a holstered gun and not realizing you're facing a violent threat until it's a couple feet away is different than being on patrol with a gun in your hands.

It's safe to say that your reaction time will be at least as quick as a trained individual on patrol, but probably slower.

Next, how long does it take you to grip, unholster, rock and press the trigger? One-handed from concealment? While being hands-on with an attacker with only one hand and divided attention?

In force-on-force work I've done, the time to get the gun into play varies from 1-4 seconds, depending on the type of concealment (if any), how compliant your training partner is, and if Mr. Murphy and his law make a visit during the process.

As soon as the attacker acts, the technique doesn't work anymore.

An untrained fighter can deliver 3-5 strikes per second or 1-3 "haymaker" or "lights-out" strikes per second. Those strikes could be with his hands, a knife, golf club, tire iron, baseball bat, etc. In a perfect world, you're looking at 1-1.5 seconds to deliver the first shot from your gun — and it's probably going to be a gut shot. In a perfect world, that gut shot will instantly stop your attacker.

But that's not the way it usually works.

Noncompliant attackers who are taking actions that justify you shooting them are probably going to be hitting, cutting or shooting you during the time it takes you to get your gun into the fight.

There's a good chance he'll try to go for your gun or hurt you to keep you from shooting him. And there's a good chance that 1-2 pistol shots to the gut aren't going to stop the fight before he does more damage to you — regardless of how lethal those shots may end up being.

Contact shooting just doesn't work well in that context. Ask anyone who's tried it with force-on-force training, and they'll tell you the same thing: It only works with a compliant training partner.

So, what should you do? There are a couple of approaches.

Depending on the attacker and his level of druggedness, drunkenness or derangement, the eye/throat strike may even stop the attack faster than a gut shot.

The second approach is to do rapid-fire, palm-heel strikes to the head/face until you shift your attacker's center of mass backward. As soon as this shift happens, you can take a step back, draw your pistol with the use of both hands before he starts advancing again, and engage that attacker or other attackers as needed.

Both are effective. Both have strengths. And both are way more likely to work in a real-life situation than an all-gun-all-the-time approach.

What about other retention shooting situations?

There are absolutely reasons to practice retention shooting — including cornering, being surprised by a second attacker who has an angle on you while you are focused on engaging a primary attacker, and even in a situation where you've struck an attacker to the point where he gives you space to effectively draw your weapon.

But, for the most part, this is two-handed, close-to-the-body shooting rather than having your left hand/elbow out in front of you and your muzzle, fighting off an attacker. A couple more general items on retention shooting:

First off, there are a lot of schools and instructors (I was one of them) who teach that you should have the bottom of your magazine pressed against the side of your ribs and the gun laying horizontally so you won't have a malfunction from the slide hitting you or getting caught up in your clothing. This becomes a big problem if you end up in a fight for the gun.

When you're holding the gun like this, your palm is facing up. If someone pushes on the muzzle of the gun and you push back, the wrist will fold in.

In addition, your elbow is going to be at about a 45-degree angle. If you push toward an attacker and the attacker pushes back, the triceps are weak at this orientation, and it's likely your arm will fold in as well. The combination of your wrist and your elbow folding gives you a situation where your muzzle is pointed at your head or chest. It may not be in battery by that time and may not be able to fire, but it's going to be distracting (best case) and easier for your attacker to take.

I shoot year-round with the summer/winter clothes I wear all the time, and I haven't found a situation where I need to rotate my gun to keep it from getting caught in my clothing. That's unusual.

Many bulky/loose winter clothes will cause guns to malfunction unless you rotate your gun when doing retention shooting. If that's the case for you, see if you can get your gun to run reliably by rotating the gun 45 degrees rather than a full 90.

Second, just assume that if you're shooting at contact distance, your pistol is going to malfunction. Don't try to fix it with a malfunction drill while someone is attacking you, just use the darn gun as an impact weapon.

It's harder than the tiny bones in your hands and will focus your strikes better. As a bonus, striking your opponent with your pistol may take care of the malfunction.

I know most of you reading have gone through training that teaches this technique, and there's a good chance I upset some people. I'm not interested in dogma, only what works. If you think the points I made aren't valid, let me know.