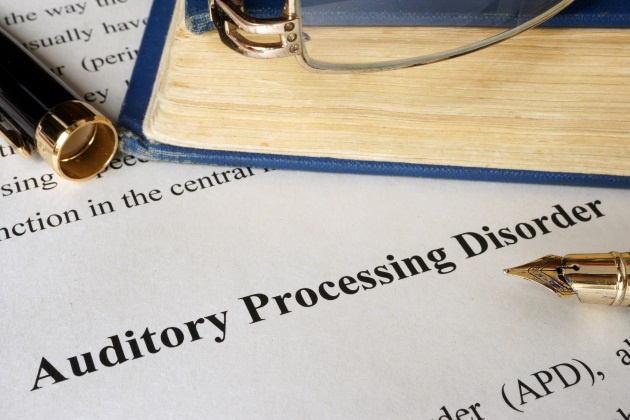 Unlike many deficits that fall under the umbrella of audiology, auditory processing disorders are not diagnosed during infancy, toddlerhood or even the early school years.

In fact, most audiologists wait until age 7 to make a definitive diagnosis. This is due to the child’s neural pathways not being sufficiently mature to make a full evaluation prior to this age, explains Tracy Hagan Winn, audiologist at the Northwestern University Center for Audiology, Speech, Language, and Learning in Evanston, Illinois.

Conducting evaluations for central auditory processing disorders, which can only be diagnosed by an audiologist, is one of Winn’s areas of expertise.

The children she tests are usually between 7 and 18 years of age. Most are referred for a full evaluation through the school system — often after a school speech pathologist or psychologist sees signs of an auditory processing disorder on a child’s screening.

While most children with hearing loss will be identified through a universal hearing screening at birth or when they don’t talk around age 2, an auditory processing disorder won’t show up until much later, she explains.

Frequently the disorder doesn't emerge or become noticed until middle school when the student’s academic workload gets more challenging. Suddenly, it becomes hard to pay attention and take notes.

"We even have kids that we think have had APD their whole lives but we don't catch them until college. They've gotten by all their lives, but suddenly they’re in a lecture with 300 people and they can't keep up," says Winn.

What are auditory processing disorders?

Central auditory processing, per the American Speech-Language-Hearing Association (ASHA) literature, begins when the neural representation of acoustic signals are processed after they leave the cochlea and travel through the auditory nerve to the primary auditory cortices of the left and right hemispheres.

So, people with CAPD or APD generally have their hearing capabilities intact.

There are three main types of auditory processing disorders, which Winn summarizes. The first affects the ability to decode information and discriminate between words, so often information is not interpreted correctly. This can become even more difficult when there is a lot of background sound or in a noisy classroom.

The second involves extracting keywords so the meaning of a message is missed because the person is not able to pick up on the emphasis. Winn illustrates this with the example, "Look out! The window!" or "look out the window" — the same phrase with drastically different meanings based on the speaker’s emphasis.

The third central APD is an integration deficit where people have difficulty in assigning meaning because the transfer of information from right to left hemisphere doesn't occur. 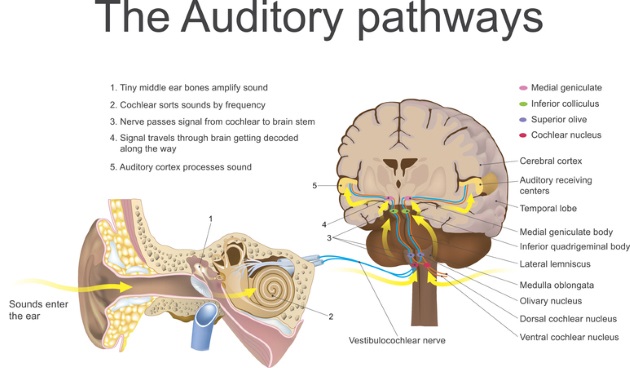 Unfortunately, there are no distinct red flags to distinguish APD because it shares common signs and symptoms with many other disorders.

"To begin with these kids appear to be hearing impaired because they’ll often have difficulty understanding what’s being said so there’s a lot of ‘what’ or ‘huh,’" says Winn. "So first and foremost hearing loss is ruled out, usually through a screening at the school."

Along with a hearing problem, characteristics of APD, such as difficulties with writing, spelling and math, slow response in oral communication situations, or being easily distracted can also reflect a learning problem, an attention issue, or a memory issue, notes Winn.

Other behavioral characteristics of APD are listed on the ASHA site. They include difficulty understanding spoken language in competing messages, in noisy backgrounds, in reverberant environments, or when presented rapidly. Children may also find learning songs, nursery rhymes and foreign languages particularly challenging.

Misunderstanding messages or not being able to detect stress and intonation variances that aid in interpreting sarcasm or jokes may also be due to an auditory processing disorder. However, an individual with a social communication or pragmatics difficulties may also have this challenge, as discussed in a previous MultiBriefs article.

Given such overlap with other deficits, detecting auditory processing disorders is a complicated process that requires an interdisciplinary approach.

"We don't do our testing for auditory processing in isolation," emphasizes Winn.

After normal hearing has been checked at the school, Winn requires candidates to get both speech-language and psychological evaluations. Often they have other issues with learning disabilities, such as ADHD or language processing.

"It's a ruling out process. We just look at each component and then see how that component might influence another," says Winn. "Many times the kids we're seeing are also seeing a speech language pathologist, possibly an educational specialist who is working with auditory memory or working memory."

The clinic at Northwestern is multidisciplinary, so children who’ve exhausted their options within the school system come in for a comprehensive evaluation lasting over two days, shares Winn. It includes learning, speech and language and auditory processing.

The process begins with a test to rule out any peripheral hearing loss.

"We would then look at all the components of the central auditory system so it's between four to seven sub tests to put the full picture together. We look for very specific patterns in the test results to indicate what type of disorder, if any, they have," explains Winn.

Once the type of auditory processing disorder present is determined, she’ll make recommendations for treatment to be carried out by a speech and language therapist — usually within the child’s school.

Treatment, which depends on the type of APD present, often includes a combination of direct skills remediation such as auditory discrimination, compensatory strategies and environmental modifications.

Examples of compensatory strategies Winn shares are keyboarding instead of writing, having a note taker, and using Cliffs Notes to support reading. Environmental modifications could include using an FM set for direct communication between teacher and student, preferential seating in the classroom, or being placed in a quiet classroom.