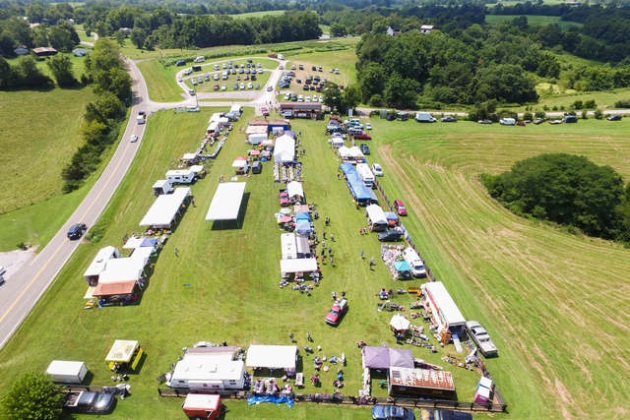 The 127 Yard Sale is commonly known as “The World’s Longest Yard Sale.” It is a serial shopper’s dream come true, snaking each August for 690 miles through six states: Michigan, Ohio, Kentucky, Tennessee, Georgia and Alabama.

The majority of the route follows U.S. Highway 127 from Addison, Michigan, south to Chattanooga, Tennessee, switching there to trace a route along the scenic Lookout Mountain Parkway to Gadsden, Alabama.

The big sale officially begins on the first Thursday in August and continues through the following Sunday, attracting hundreds of thousands of vendors and shoppers from around the country — and the world.

“It is a mutual exchange of cultures with a common goal: to look, buy and sell,” says Alabama photographer Dennis Keim, who’s documented the event for years. “As you drive the country roads, you’ll hear a collection of dialects and incredible stories related to the individuals and the items they sell,” adds Keim, “and you’ll see a plethora of items that only your grandmother could love. It is Americana at its best.”

The event has become a magnet for antique and collectibles vendors and buyers who gather from all over the nation for this once a year marketing extravaganza. It all began in 1987, when Mike Walker, a former executive with Fentress County Chamber of Commerce in Jamestown, Tennessee, planned the event to encourage travelers to bypass interstate highways in favor of scenic routes through rural communities, allowing them to discover the life of small-town America. The annual event soon spread to Kentucky and then Ohio, eventually extending to its present route bisecting almost the entirety of mid-America.

“For the most part, the route still goes through rural areas,” says Josh Randall, spokesman for the 127 Yard Sale. “There are a few cities like Cincinnati and Chattanooga, but the vast majority of the route is what you’d consider countryside. It’s enormous. It’s a little weird. It’s the Great Wall of Made in China, and it’s OBO Americana on full display.”